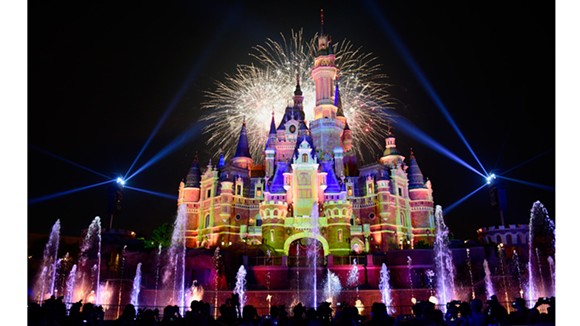 Image via Disney
Disney CEO Bob Iger recently gave an interview with Bloomberg where he addressed the first-year anniversary celebration at Shanghai Disneyland.

The resort, which clocked a whopping 11 million guests its first year, well ahead of where the company had expected attendance to be, is the first Disney resort in mainland China.

The $5.5 billion resort is the largest single foreign investment ever by the Disney company. In the Bloomberg interview, Iger confirmed that park was nearing the break-even point, adding that this is the first time one of its resorts have done that in its first year in over 30 years.

Iger confirms he worked on the Shanghai resort for more than seventeen years. He said he was “proud at how the Chinese people had taken to it,” with two/thirds being from outside of the Shanghai region which Iger said was “very, very interesting because it suggests that this is a national destination which frankly we didn’t expect.”

He goes on to explain that size of the land will allow for “substantial expansion” of the resort over the next five to ten years. Then he confirms that Disney has always believed for other opportunities in China but at this point, the focus is on Shanghai. He explains to Bloomberg: “Might we build in another city over time? Yes. There’s a great likelihood that we will. But it’s way too early.”

While Shanghai Disney seems to be a whopping success over in Hong Kong, it’s a different story with Hong Kong Disneyland which saw a 10.3% drop in attendance last year according to the TEA/AECOM numbers released earlier this month.

The underperforming resort is in the midst of a major overhaul that will see, for the first time ever, its entire castle being updated and enlarged. Other new additions include a Marvel update to Tomorrowland, a Moana stage show, and a new mini-land devoted to Frozen. The park has been one of the worst-performing Disney parks in the world, with only the Walt Disney Studios Park in Paris performing worse last year (technically the Shanghai park did rank below Hong Kong, but it also opened in June).

Shanghai is currently working on its own Toy Story Land which should open around the same time as the one here in Orlando. The Toy Story Land in Shanghai was partially built prior to the opening of the park, but construction was put on hold during the first few months when the park saw larger than expected crowds.

A groundbreaking ceremony was held in November. Other expansions are rumored to be in the works, though none have been confirmed yet.