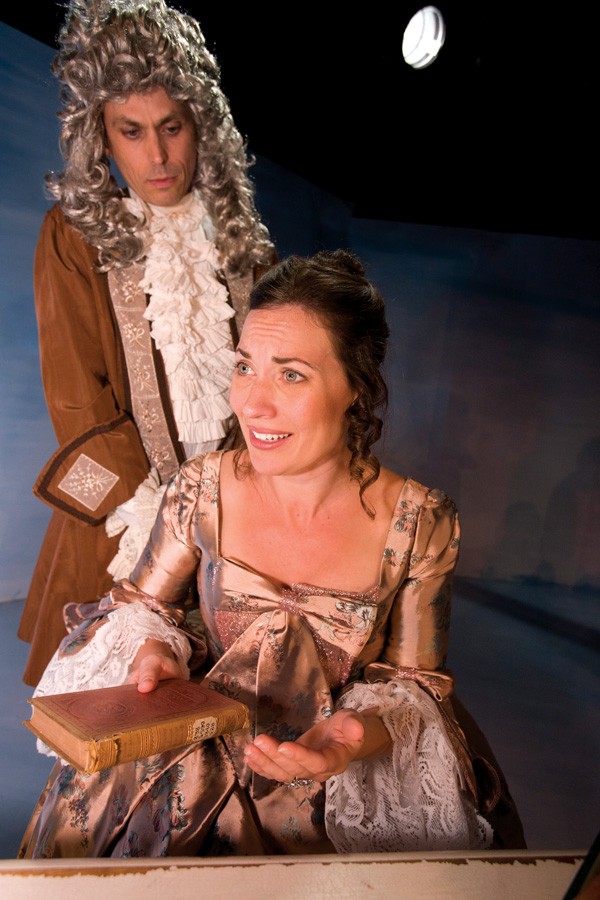 What do Newtonian astrophysics and the formation of embryonic planets have to do with surrogate pregnancy and obstetrical mortality? According to playwright Karen Zacarias, they are as intertwined as the force of gravity and the mystery of dark matter. As Emilie du Chatelet, heroine of Zacarias’ time-traveling science fantasy Legacy of Light observes, “light and love have the same properties”: both possess heat and energy, but no mass, and it is only by that miracle of physics that we can survive their pelting.

Legacy of Light, the newest play presented by Mad Cow Theatre, premiered in 2009 at Washington’s Arena Stage and has seen several productions since. In its current Orlando incarnation under the direction of Denise Gillman, the show comes across as ambitious and filled with interesting ideas, but unsatisfyingly uneven.

The schizophrenia starts with the script’s structure. The action, at least in the beginning, is bifurcated between two eras. First, in 18th-century France, we meet du Chatelet (Heather Charles) and her lover Voltaire (Steven Lane), who duel with deliciously sharp dialogue over Emilie’s recent dalliance with the puppy-like poet Saint-Lambert (Garrett Jurss). Voltaire, the famous political philosopher and “Father of the Enlightenment,” needs no introduction, though in Lane’s amusingly pompous embodiment he insists on it often. Du Chatelet may not be a household name, but if there were any gender justice she would be; this noblewoman was easily the intellectual equal of her immortal friend, writing scientific treatises that were dismissed in her lifetime but are still studied today. When she becomes pregnant, Emilie finds herself in a race against time, trying to document her theories before biology and the primitive maternity techniques of the time take her freedom.

The other half of the show shifts to modern-day New Jersey and centers on Olivia (Becky Eck), a high-strung astronomer who is on track to win a Nobel for discovering an infant planet, but still longs for an infant of her own. Since late-stage ovarian cancer has stolen her ability to conceive naturally, Olivia and her schoolteacher hubby Peter (Stephen Lima) turn to 21-year-old fashion design student Millie (Lexi Langs), who becomes a surrogate in order to save the foreclosed home she and her dependent brother Lewis (Jurss again) share. As you can probably guess if you’ve ever watched a Lifetime TV movie, Olivia begins to have deep doubts about her made-to-order offspring, as does Millie’s brother, leading to predictable teeth-gnashing and running around in the rain.

In the end, the time periods merge, rejecting Voltaire’s repeated invocation of a “rational universe” based on “cause and effect” in favor of phantasmagorical absurdity. It’s here that the play’s already shaky tone finally falls apart, killing comparisons with more successful historical- science-inspired shows like Tom Stoppard’s Arcadia or Michael Frayn’s Copenhagen. While the scenes set in the past start as French farce and eventually deepen into tragedy, the modern moments follow an opposite arc, starting with a serious subject and gradually dissipating its impact through overly obvious complications and excessive moist-eyed emoting. When the two realities combine, rather than each elevating the other into a grand spiritual statement (as I think the author intended) they instead crash to the ground in a pile of goofy pretension.

The talented cast, though beset by sluggish scene changes and wandering dialects, works hard to make this mess work, and Charles and Lane both sparkle. But even in this “best of all possible worlds” (as the optimistic Emilie is fond of opining) the light they generate isn’t quite enough to illuminate their clichéd counterparts.