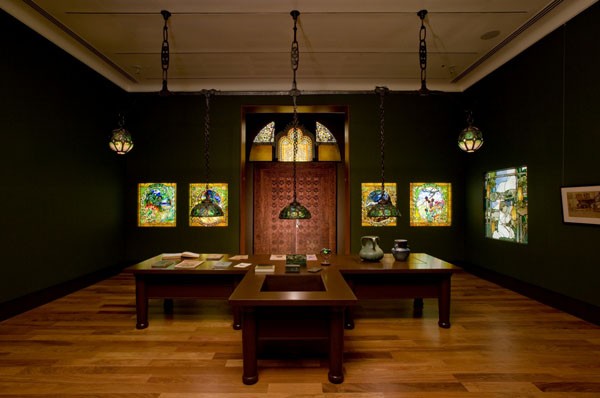 “Tiffany meant for it to be his legacy,” says Catherine Hinman, director of public affairs for the Morse. “He built it beginning in 1902, but in fact, he never really finished it. It became something very special to him, and it was a museum for many of his most favored works.”

Laurelton Hall was significant, she says, because in it “he created whole environments.” Though everyone knows Tiffany’s stained-glass lamps, not as many realize that he was also a great decorator and he created not just windows and decorative objects, but entire rooms. “At Laurelton Hall, he brought all of that together and created this utopian environment for himself,” Hinman says. Artists, including Hugh McKean, the first director of the Morse Museum, went there to paint and study.

But after Tiffany died in 1933, the foundation Tiffany had established at Laurelton Hall didn’t have the resources to maintain the property. “They had a big auction and sold off much of the contents of the house, then moved to New York City, where they still exist today,” Hinman says. The 600-acre property was subdivided and the estate dissolved, though the house remained intact and occupied until 1957, when it was destroyed by fire. One of the Tiffany daughters contacted Hugh McKean and his wife, Jeanette McKean, because they had shown an early interest in Tiffany’s work. The McKeans went to Long Island and made the decision to save everything they could from the house, Hinman says.

For years the Morse has housed its collection of Tiffany windows, glassworks, vases and architectural pieces (not to mention an astoundingly detailed chapel designed by Tiffany for the 1893 World’s Columbian Exhibition in Chicago that’s been fully reconstructed inside the museum); the expansion will give the museum space to show more than 300 new objects, including leaded-glass lamps and furnishings, salvaged from Laurelton. Though the museum couldn’t actually recreate the rooms as they were in the mansion, Hinman says the Morse tried to “build galleries around the objects in such a way that they suggest the original aesthetic.”

The new wing of the museum will officially open to the public on Feb. 19, and admission to the Morse will be free from Feb. 19 through March 20 – both to celebrate the wing’s completion and to encourage locals to visit. “People don’t take the time to smell the roses in their own backyards too often,” Hinman says, “but this is an internationally renowned collection. It’s been called the most important work of Louis Comfort Tiffany in the world, and it’s right here in  Winter Park.”