Crealdé exhibit is both quiet elegy and cautionary tale

Top of the lake 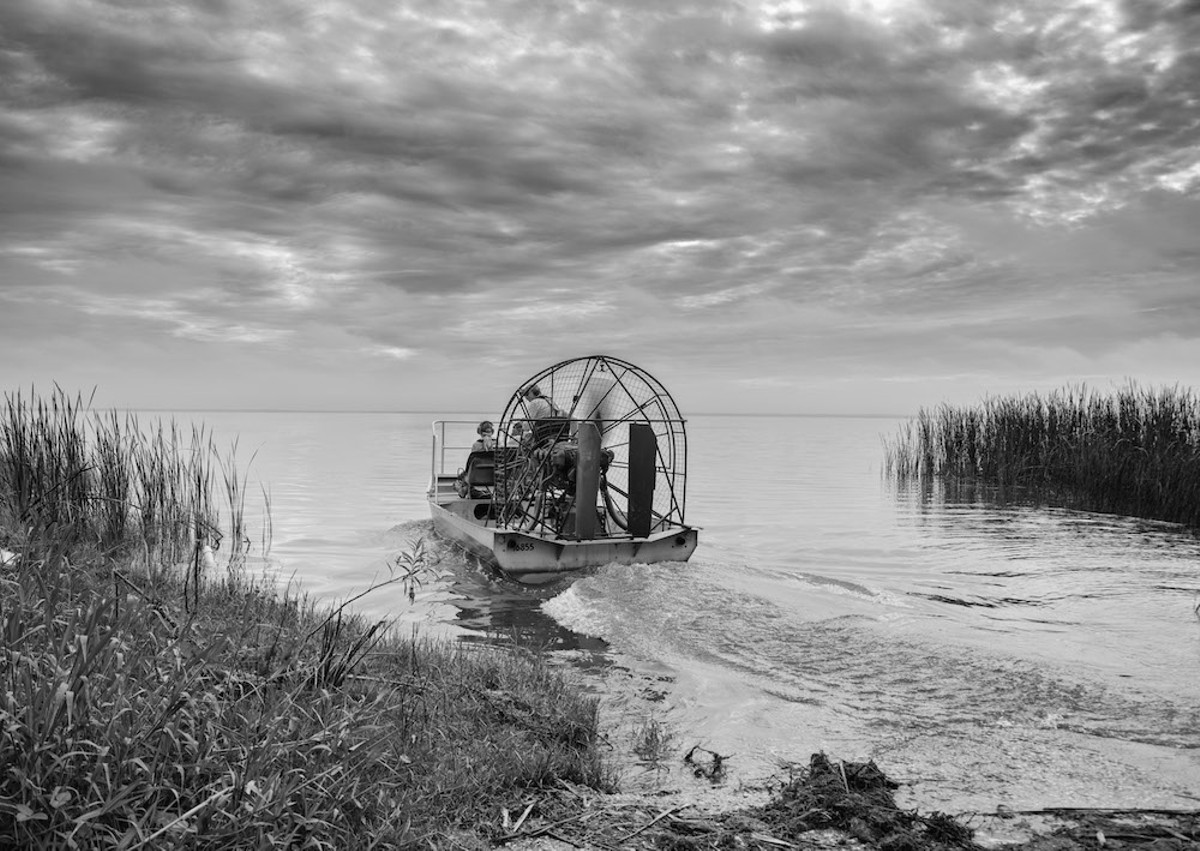 “Researchers With SJWMD Surveying Montverde, FL (2017),” by Cynthia Slaughter
The Lake: A Documentary Exploring the Land and People of Lake Apopka, through Jan. 13, 2018, crealde.org, free

Black-and-white photographs, each framed with an explanatory text, breathe life into the rarely intersecting worlds of the farmworkers and the new suburbanites around the lake. Cynthia Slaughter's portrait "Former Farm Worker Geovany Lopez" poses him on his front porch among jasmine vines. His story is that of a survivor: farmworker and citrus grader, now recycling-plant worker. His pleasant round face and close-cropped mustache conceal a tough interior hardened by each new phase of his existence. At the Hannibal Square Heritage Center, Kucku Varghese displays a portrait titled "Lake Apopka Farmworker Linda Lee." Seated on her sofa under a photo collage of her family, Ms. Lee's hair is pulled back tight, revealing pursed lips and a stoic, oval face. Heavy-lidded eyes hint at a life that is far from that of the precocious young boy in a bow tie floating over her head.

Portraits are rare, though, in this exhibit, which focuses instead on the natural and manmade landscape. It is bent on capturing Apopka's unsavory demeanor as well as its beauty. At Crealdé's main campus, Tom Sadler's "Pump House Nocturne" is an oil painting of an unholy structure looming in the dusk. Apparently built in the early 1940s to pump down the lake for more farmland, its weathered wood architecture and three horrid lake-sucking pipes is made to look like a crime scene.

And indeed in many ways, it is. The paintings, more than the photographs, raise the emotional stakes in this story. Photography is used here in high method, neutrally documenting Lycra-clad white guys pumping their bikes up Green Mountain and boxy new houses splayed in a manicured landscape. Judgment is left to the viewer ... is the lake better off now?

It is a quiet, contemplative elegy to the place that was once Florida's bass fishing capital and a fertile contributor to the war effort. The portraits draw a deep level of respect for the people of Apopka, people who have endured in this difficult place, while the modern world whizzes on past. Yet glimpses of the lake's natural beauty also shine through here: Martha Lent's painterly "Gray Heron and Ibis" in the Crealdé gallery is colorful and humorous, a reminder of the Lake's still-abundant wildlife.

Lake Apopka's tragedy is too often brushed under the rug in our tourist-conscious region. What emerges from this show is a sense of this deeply wounded place in permanent hospice, unrecoverable and yet still respirating slowly. In this cautionary tale, the viewer can only hope to avoid making these mistakes elsewhere. Here, we must live with ours forever.