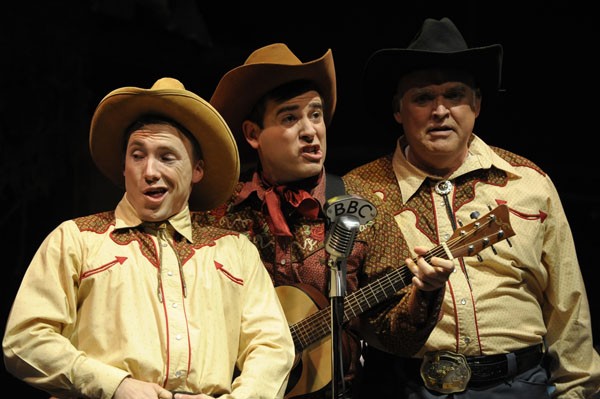 First, the good news. For this year’s holiday offering, the Orlando Shakespeare Theater is not presenting A Christmas Carol. (No disrespect to Mr. Dickens, but this reviewer has seen enough Tiny Tims throughout his career to fill an orphanage, and though I do appreciate the young tyke’s “Ga’-blessing” each and every one of us, each and every Christmas, I don’t need another trip inside the miasma of Scrooge’s  dyspeptic nightmares.)

For the not-so-good news: Although the show that is being staged, Chaps! A Jingle Jangle Christmas, a musical revue written by Jahanna Beecham and Malcolm Hill, and directed by Patrick Flick, has its charms, it’s a lot less funny then last year’s Every Christmas Story Ever Told and much less theatrical and engrossing  than the previous season’s The Trial of Ebenezer Scrooge.

Chaps’ plot (what little there is) concerns a 1944 BBC Radio broadcast that was supposed to feature a cowboy ensemble from America, imported to Britain to entertain the troops. When the real cowboys don’t show up on time, the denizens of the studio have to take over and pretend that they hail from the Wild, Wild West rather than London’s West End. That’s pretty much it. The script writing is mediocre at best, the story-line meanders all over the place like a herd of heifers on locoweed, and the show’s running gag consists mainly of the Brits having to hide their accents (except when they don’t, which tends to get a bit confusing) and make believe they are real “Amuhri-cuns.”

And yet, all of the foregoing is merely an excuse for the Chaps company to riff through a menu of old-timey cowpoke tunes – everything from “Ragtime Cowboy Joe,” to “Tumblin’ Tumbleweeds” to “I’m an Old Cowhand.” In fact, whenever the plot threatens to wander right off the range – and it often does – the four newly minted dudes, actors Michael Gill, Philip Nolen, Mark Whitten and Michael Edwards, along with Melissa Mason as the only real American in the story, simply break into another song. They are abetted by a competent musical trio consisting of Ted Henderson, Matt Tonner and Daniel Flick. Brandon Roberts (whose prodigious comedic talents go largely underused) chimes in from time to time as the radio studio’s sound-effects man.

But not wanting the be the Grinch here, I must admit there are some very funny moments throughout the affair, especially when Philip Nolen takes the stage for an impromptu gag, musical solo or cross-dressing exhibition. Also, as the show progressed and I became convinced that there would be no particular narrative to follow, nor character progression to become interested in, I was able to give myself over to the smooth harmonies and pleasant twang of the show’s musical fixin’s. Chaps is not a gift-wrapped Mercedes. But neither is it a lump of coal. It’s probably more like a sweater made by Grandma and a cup of warm cocoa. Not bad for a winter evening, and of course, there’s always next year.