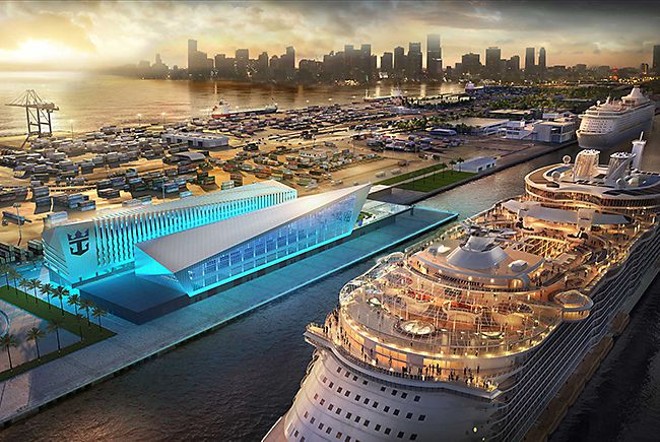 Image via Royal Caribbean
The new PortMiami Royal Caribbean Terminal
Prior to the approval of the multi-trillion-dollar economic stimulus package, there was much talk about how it would assist the cruise industry. Few sectors of the economy have been hit harder, or received more negative coronavirus-related press, than cruise lines.

The industry was hoping that after months of negative press, from the horrific weeks-long debacle of the Diamond Princess to cruise nightmare stories continuing to fill social media, some assistance via the stimulus package would bring relief. Few politicians seemed interested in helping out an industry that has made much of successes via tax loopholes and questionable practices.

House Democratic Caucus Chairman Hakeem Jeffries made this abundantly clear when he tweeted,

“We must stand up for all displaced workers (and we will).

But let’s get something straight.

And now some want the American taxpayer to bail them out?

As the coronavirus was causing multiple deaths and hundreds of infections on cruise ships, cruise lines kept sailing while pulling out previous tools by dropping prices and encouraging future bookings.

In an email obtained by Miami New Times, a senior sales manager at Norwegian Cruise Lines was encouraging salespeople to downright lie, "to help you close your guests that are on the fence."

The email stated that these misleading statements are only to be used if a person is worried about coronavirus, noting, "DO NOT USE THESE unless the coronavirus is brought up."

The lies included things about coronavirus being unable to survive in warmer climates and that the health crisis will be resolved by spring. The talking points also included reassurances such as, "the only thing you need to worry about for your cruise is, do you have enough sunscreen?"

Image via Bermello Ajamil & Partners
The new PortMiami Norwegian Cruise Line Terminal
Things don’t look much better at other cruise lines. Even while the largest lockdown in human history is taking place in response to the global pandemic, at least a dozen cruise ships with thousands of passengers remain at sea.

Holland America had to evacuate healthy passengers off of the Zaandam onto another ship waiting nearby after multiple deaths and more than 150 fell ill on the Zaandam. Now, the Zaandam is headed to Port Everglades. However, Florida officials have yet to give it clearance to dock here with officials in South Florida worried that allowing hundreds of new patients to disembark there would overwhelm their already strained medical system.

Image via Port Canaveral
Carnival new $163 million Terminal 3 at Port Canaveral
Holland America’s parent company, Carnival Corporation, which also owns Princess, remains insistent that cruise ships do not have an increased risk when it comes to coronavirus. This, despite the CDC warning that "cruise ships markedly increase the risk and impact of the COVID-19 disease outbreak within the United States."

In an Axios on HBO interview that aired March 22, Carnival Corporation CEO Arnold Donald compared the risks on a cruise ship to those of visiting a place like Central Park claiming that cruise ships have lots of natural social distancing due to their size. He also stated, "cruise ships are not a source for coronavirus. We have hundreds of cruise ships out there. Very few had cases on them."

All three have headquarters in South Florida, but none are actually American companies.

Carnival is incorporated in Panama, Norwegian in The Bahamas, and Royal Caribbean in the small West African nation of Liberia. The billions in revenue also don’t help Florida or the U.S., with the big three paying an estimated less than one percent in U.S. taxes. The tax loopholes don’t end there.

Image via Royal Caribbean
Royal Caribbean Cruises Ltd’s new Miami HQ campus
Each uses an obscure century-old law to skirt U.S. safety and worker regulations. By having ships registered in countries like Malta, Panama, and the Bahamas, the cruise lines get away with reportedly paying some crew members wages of less than $2.27 per hour for jobs that require 11-hour shifts seven days per week. After fees, some crew members are only paid $50 per month, causing them to rely on the generosity of passengers' tips to survive. Now, these crew members face empty ships and the threat of a deadly global pandemic, as their CEO – who made $11 million last year – downplays the risks.

The long history of questionable practices seems to have finally caught up to the industry. The U.S. backed loan guarantees that the cruise lines were hoping for didn’t make the final version of the stimulus bill.

While practicing social isolation in his lush South Florida backyard, Royal Caribbean Chairman and CEO Richard Fain, filmed a message for travel advisors on his iPhone. Fain says he wanted to shoot the video to share “how we’re going to get through this terrible time together.” Going on, he admits, “We all know the circumstances regarding Covid-19. Beyond the endless statistics and the press conferences, this situation is truly serious, and we all need to act responsibly.”

No word on if acting responsibly will include paying employees living wages, paying taxes, and moving ship registrations to American soil but, if history is any indication, it likely doesn’t.