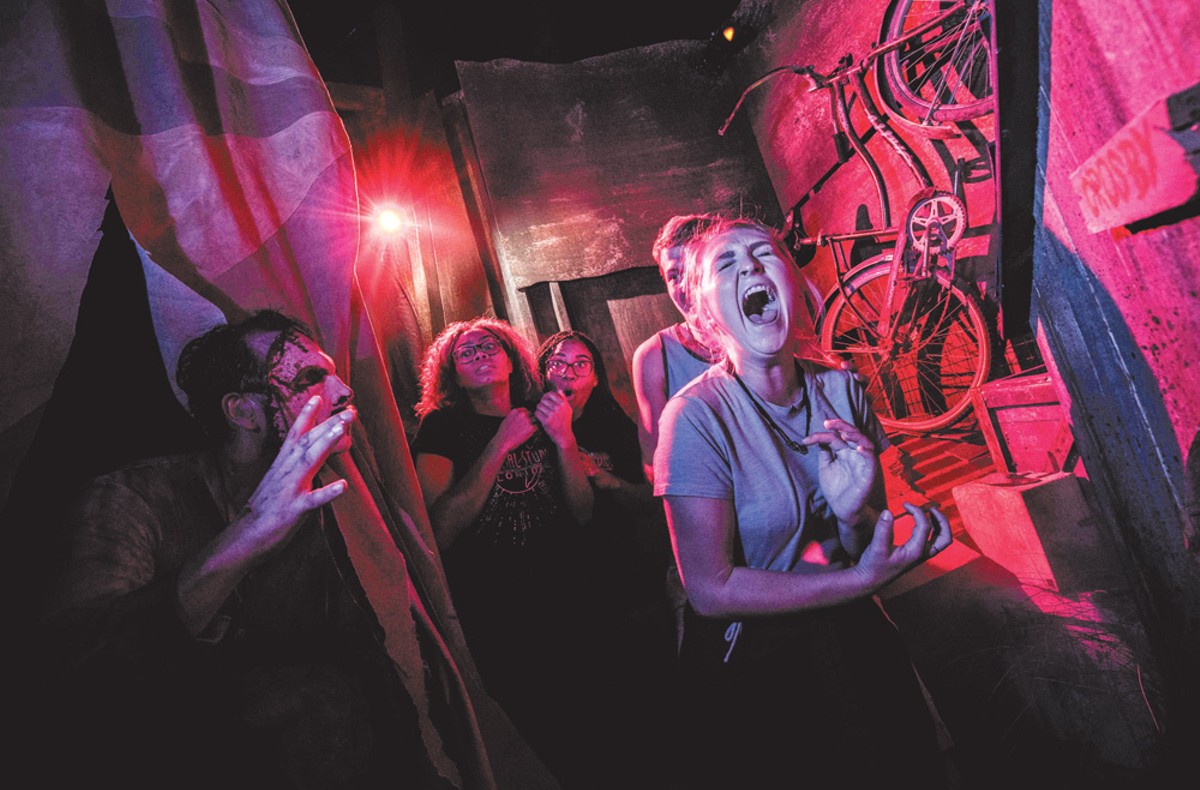 I've been faithfully attending Halloween Horror Nights at Universal Orlando since 1996, watching the event grow from an off-season afterthought to America's premier theme park haunt. This year's 1980s-inspired edition is not only the last before creative mastermind Mike Aiello moves up to oversee entertainment at the upcoming Epic Universe expansion, but also among the best they've produced in a decade. However, I've long heard that Halloween Horror Nights at Universal Studio Hollywood – which actually predates Florida's – is an entirely different beast, despite sharing a name and numerous movie themes. Last weekend, I finally flew to California for my own head-to-head Horror Nights face-off, and found out that ooze is just like Oz: There's no place like home.

There are some things about Halloween Horror Nights in Hollywood that I wish Orlando would adopt. While Florida has an economical Frequent Fear program for repeat guests, as a one-time visitor I found Hollywood more affordable; a non-discounted event ticket with early afternoon entry and Express privileges cost me $209, while an equivalent admission at home is $237.48. Crowds in California are still "pulsed" through the haunted houses in smaller groups, instead of being marched through in a constant conga line, and the flashlight-waving attendants inside their mazes aren't as intrusive. Hollywood wisely places QR codes to scan with Universal's amusing mobile app at their maze exits; Orlando's are at the entrances and easily missed. And Hollywood's event layout affords a rare opportunity to walk around backlot sets ordinarily only seen from the Studio Tour tram.

Aside from those logistical improvements, comparing the two Horror Nights events on an aesthetic level feels about as fair as pitting a Major League ball club against a AAA farm team. In Orlando, we've become accustomed to haunted mazes with epic facades and intricate scenic detail imparting an impressive sense of scale and scope. One might assume that, with easier access to the actual filmmakers and technology behind big-screen frights, Hollywood's mazes would be even more movie-accurate than their Orlando incarnations. So, despite being forewarned of Hollywood's habit of filling its haunted houses with blank black walls, I was still shocked to experience firsthand how unfinished and amateurish California's attractions seem. While Florida's haunts are fully fleshed out from entrance to exit, Hollywood's alternate between impressive environments and utterly unthemed dark hallways, with little apparent effort applied to transitions, pacing or even concealing the open-air ceilings. And though the four original-concept mazes in Orlando are all richly imagined, the two in Hollywood look laughably low-budget.

Hollywood also renewed my appreciation for how efficiently Orlando engineers its scares, with initial distractions followed by an "attack" from an alternate angle that's intended to flush frightened guests further into the maze. California creates bottlenecks and backups by scaring from the wrong sides, and sometimes forces its actors to stand in an obvious spot and flail to a repetitious audio loop. As a result, throughput is frustratingly sporadic, especially for guests slumming it in the standby queue; while I sailed through the Express entrances, regular attendees in Hollywood spent more than two hours in many lines; waits in Orlando were on average a third shorter on the same night. The design of Hollywood's scare zones was equally awkward; some had hardly any scenery to define their theme or boundaries, while others were one-way labyrinths littered with props worthy of a neighborhood haunted trail.

Here are some specific comparisons between five of the headliner haunts at this year's Halloween Horror Nights events:

As a one-time employee of the long-extinct stage show, Orlando's Ghostbusters maze was the highlight of my Halloween, as the designers pulled out all the practical puppets and Pepper's Ghost projections they perfected on Poltergeist. Hollywood's take boasts a firehouse facade and some effective lighting effects, but lacks a live mike for the actress playing Janine and the immersive Temple of Gozer finale.

The long-awaited return of Universal's cinematic Sinister Seven is one of Orlando's scariest mazes, but I thought it would have been more effective if they hadn't tried to squeeze in every fiend; the Hunchback and Phantom's square footage would have been better spent on Frankenstein. Hollywood focused only on Karloff's Creature versus the Wolfman and was stronger for it, with atmospheric environments that emphasized the characters' pathos.

This cult classic was a popular scare zone last year and came back as a full-fledged house. It's more funny and fanciful than frightening, and both versions are filled with mechanical gags and tactile surprises. Hollywood has a colorful big-top entrance and gave me a couple of good jumps, but Orlando wins with its ice cream truck photo op out front.

I've only seen trailers for the Jordan Peele film, but I want to change that after experiencing this unnerving maze. Both takes effectively transform everyday spaces into scenes of horror; the cast in Hollywood are dead ringers for their cinematic counterparts, but California's scenery can't compete, especially in the funhouse-like forest segments.

I didn't think Orlando's walk-through recap of the Netflix series' second and third seasons was as strong as the first, but it's a mind-flaying masterpiece next to Hollywood's half-baked effort. I'm not sure which was more egregious there: the relative absence of the show's core kid characters, or the complete omission of the iconic Starcourt Mall. Nancy would definitely call that "bullshit."