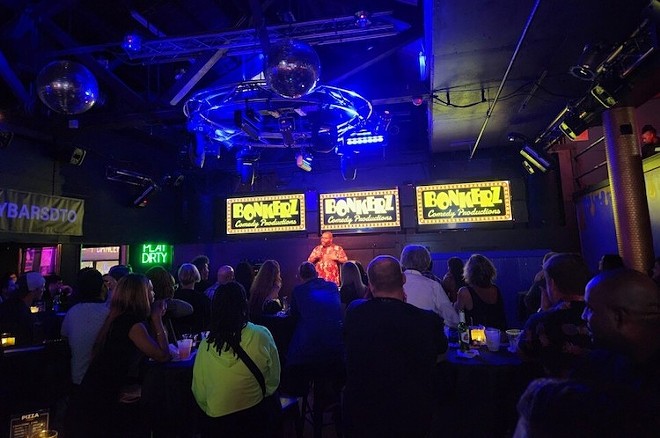 This Friday night, comedian Vince Taylor will take the stage at The Corner, a new venue in the heart of downtown Orlando. The Corner is the latest concept from Foundation Presents, the parent company of the Beacham, the Social and other spots clustered at Orange and Washington streets.

Taylor is a popular 12-year comedy veteran whose inspired view of life has won him audiences around the world. The headliner is a ubiquitous presence in Central Florida clubs and does frequent stints on cruise ships.

“This is gonna be a comedy show for people [who] live in Orlando but might not originally be from Orlando, which I believe is the majority of us. That’s why I’m calling it the 'I Guess I'm From Orlando? Comedy Special',” said Taylor, who is originally from St. Louis.

“I want this to be an Orlando-based set that speaks about everything from our flourishing diverse community of white, Black, Latino and Asian Central Floridians, from East Colonial to West Colonial, Lake Mary to Kissimmee, stretching all the way across I-4 to College Park to Curry Ford. I want to talk about some of the things that we've learned about ourselves over the years, you know, from the [I-4] Eyesore to the Orlando Eye.”

Powerhouse Roberto “Mini” Font is set to host this Friday night. Guest spots are filled by Kameron Patterson, Henry Pounders and David Jolly. Patterson and Jolly, both Orlando natives, have serious comedy chops and have developed followings by constantly performing in and out of town. Taylor chose them for their uncompromising, hard-hitting comedic perspectives. Pounders has lived in Orlando for four years, and Taylor first encountered him at Comedy & Karaoke at The Dreams Lounge.

Taylor’s show will be the third at the new Bonkerz Comedy Club - Downtown Orlando inside The Corner. This new partnership gives downtown's denizens the chance to check out some top-tier local stand-up.

“The Corner is the perfect old-school comedy room,” said Joe Sanfelippo, founder and president of Bonkerz Comedy Productions. “The main issue is that downtown hasn’t had a professional comedy club in years and this club will fill that gap.”

All eyes are on Orlando comedy these days. Taylor is noticing more buzz than ever, with inquiries coming in from major comedy clubs in other cities and Orlando comedians getting more opportunities than they’ve seen in a decade. Sanfelippo feels that same energy.

“I have national comics already calling and asking if they can work The Corner because there’s so much buzz around it in the industry,” he said.

The latest edition of Bonkerz Comedy Club Downtown Orlando happens Friday night at 7:30 p.m. Tickets are $12-$15 and available online through Bonkerz or at the door.
Scroll to read more Things to Do articles