Halsi, a generously tattooed 19-year-old muralist and studio artist, is throwing out ideas for a possible installation at this year's Immerse festival.

"I was thinking it would be cool to do, like, an animation projection on one of the buildings," he offers.

Immerse executive director Cole NeSmith listens intently as they both sit on couches at the City Beautiful Church (where NeSmith also works as a creative director). He chimes in with support and carefully pivots Halsi's ideas when necessary.

"What we really try to focus on is something that is active," NeSmith says. He goes on for a few more seconds before clarifying, "But I really want you to be excited about it too!"

This is one of the many meetings NeSmith has made time for on this sweltering, mid-July afternoon. Earlier, he spent close to an hour on the phone with organizers from a well-known Texan festival trying to jumpstart a collaboration. After his talk with Halsi, he leaves for a sponsorship meeting in the heart of downtown.

"I wish I could just focus on the creative side," NeSmith laments at one point.

The founder's frenzied schedule is a relatively small bump on Immerse's road from scrappy start-up to established festival.

NeSmith rebranded the public arts event originally named Creative City Project earlier this year to emphasize its all-encompassing ethos. What started in 2012 as one performance per day during the month of October has grown into a dazzling night of music, dance, art exhibits, installations, performance and acrobatics all happening smack-dab in the streets of Orlando. In 2017, 105 arts groups big and small are involved, from the Asian Cultural Association to Yow Dance, and their 2020 goal is a four-day festival.

Programming director Holly Harris was one of the artists performing that first year. For one night, Harris and her dance company took over the empty lot at the corner of Orange Avenue and Pine Street.

"The next year he asked a few of his friends for ideas on how to make this bigger and larger," Harris says. "So I started basically joining that little grass-roots team."

This year's Immerse will take place on Saturday, Oct. 21, commencing at 5 p.m. with the Orlando Philharmonic Orchestra playing local composer Keith Lay's "Fanfare for Orlando." Leading up to that date, NeSmith and Harris were looking to turn things up a notch with the addition of Bandaloop, a vertical dance troupe that performs aerial choreography while suspended from the sides of buildings and bridges. In a short YouTube video, NeSmith expressed frustration after a few unsuccessful attempts at convincing building owners of the appeal of such a performance. They had hope for a moment, but Bandaloop's appearance at Immerse has since been postponed following, among other things, tenant concerns and a building's no-acrobatic-performance insurance clause.

Thomas Chatmon, executive director of the Downtown Development Board and an early supporter of what is now Immerse, tells Orlando Weekly that he worked closely with NeSmith regarding permitting for Bandaloop.

Chatmon, who calls NeSmith a "creative genius," speaks in the same kind of city-as-art jargon that NeSmith often employs.

"Millennials are largely attracted to quality of life," Chatmon says of the importance of the festival to the downtown scene. "Part of that is place-making, the experience that you offer."

He recalls the simpler times of their partnership, when most of their conversations revolved around making sure the closed-off streets required for the event were simultaneously accessible to first responders and safe for artists and attendees.

"Immerse has grown and evolved, and it plays into a high priority now as we continue to make it into a destination," Chatmon says.

Permits are not the only hiccup NeSmith faces during the planning stages. Since Immerse has grown in scope and popularity, so have its costs.

The budget for 2017 is a modest $250,000; $20,000 of that is disbursed to participating local artists like Halsi in the form of stipends, which vary but cap around $500. Another $20,000 is put aside for costs of a signature artist (which was to be Bandaloop), with the rest going toward permitting, marketing, production and staffing.

NeSmith finds himself spending a lot of time negotiating sponsorship deals for the currently free experience. And because Creative City Project, now the parent organization behind Immerse, is still listed as a nonprofit organization, they are often routed to corporate community relations departments. These departments have less money to spend, and what they do have is, in NeSmith's words, often "tied to political organizations."

He's considering turning Creative City Project into a B-corporation, allowing investors to buy a small stake in the operation while still maintaining the community service aspect intact. This reorganization, he says, would provide much-needed resources for artists while freeing the staff up to focus more on the art, a little less on the fundraising.

"The future is probably a hybrid of ticketed experiences and free public experiences," NeSmith says. "For us to grow and have significantly large and compelling arts engagement, we aren't going to be able to do that on the back of corporate sponsorship."

Harris, though optimistic considering how far Immerse has come in a few short years, has similar concerns.

"I want to say yes to every app that comes out, but sometimes artists have big financial requests that we haven't been able to put in our budget yet," she explains.

A few weeks after our conversation, Creative City opened their 2017 reservations site. This year, NeSmith says, they "positioned the tickets differently." Again there are various price levels of tickets, from a $175 VIP to a $10 single admission, but the free reservation is now called a "Financial Assistance" ticket. The website states that the organizers don't wish anyone to miss the festival because they can't afford a ticket. NeSmith says that so far, 90 percent of the reservations have been for the free ticket.

Back at the church, Halsi begins to understand the interactive direction NeSmith is pressing for. He agrees to turn in a proposal within 24 hours. A stipend is barely discussed.

"We had the Orlando Magic commit as a presenting sponsor – which is really significant for us," NeSmith shares over the phone 10 days later.

When I asked what that might look like for a nonprofit so keen on artistic expression free from jarring branding, he clarified that audience participation would remain at the core of the partnership.

Part of the Magic buy-in, worth tens of thousands of dollars, is an installation where people can shoot hoops amid lights and smoke.

The unusual partnership even helped save Immerse. As booking Bandaloop presented more and more of a challenge, the organizers brought up the idea of using the Magic's resident drumline, Rhythm 'N Blue, instead. The group will perform inside an internally lit 46-foot scaffolding tower, which will have to be built on-site the morning of the festival.

Other fundraising ideas this year include partnerships with local creatives not necessarily of the "art" variety. A commemorative enamel pin was commissioned from Secret Society Goods, priced at $20. The Dinner Party Project will serve a fancy dinner in the middle of Orange Avenue during the event, with tables right in front of that 46-foot tower, giving the VIPs a front-row seat to the drumline performance.

Whatever money the postponement of Bandaloop freed from the budget was quickly swallowed up by new labor and tech costs, however.

"It's cheaper than flying dancers over from California," NeSmith says of the Rhythm 'N Blue performance. "But when there's money involved, it quickly shifts over to being spent again." 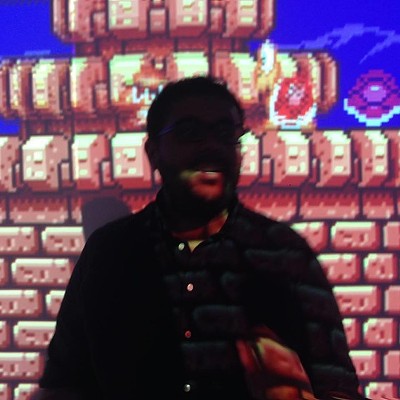