The world-famous skies over DeLand 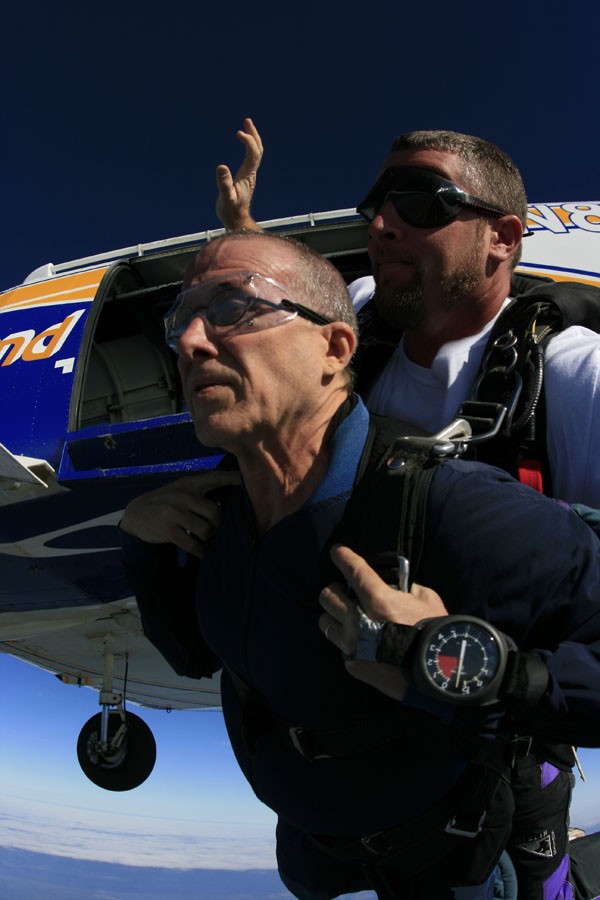 Micah Couch, courtesy Skydive DeLand
Up in arms: The writer (left) on his virgin jump with instructor Bob Crossman

One minute I’m sitting astride a bench that runs the length of a smallish airplane with a guy from Qatar sitting between my knees. The next minute, my heart jumps into my throat as the guy from Qatar disappears out an open doorway into the sky. I soon follow him. The seconds that follow are so sensation-packed that my brain can’t quite process it all. Fragmented thoughts tumble around inside my head: Oh, look – there’s the ocean. Hmm, there’s the bottom of the plane. I must be rolling. Oh, look, there’s the camera guy. Am I smiling?

About the time I realize I’m having fun, a parachute opens and I feel myself sinking into the harness that attaches me to the canopy by way of skydiving instructor Bob Crossman. I feel as if we are sitting motionless in the sky, and now that I’m not going 120 mph through the air, I can hear Crossman.

“There’s your cameraman,” he says, pointing at a parachute that seems a long way below us. The colorful canopy and photographer Micah Couch are cutting lazy-looking spirals toward the ground where the guy from Qatar and about a dozen of his colleagues are landing. Crossman lets me feel what it’s like to steer the canopy and explains some details about skydiving. As we near the ground, he retakes control; he warns me we’re going to turn, and there’s a series of slightly stomach-
churning elevator-lurching-sideways mom-ents as we descend. As instructed, I stick my legs out in front of me and land softly on my butt. It has been just over an hour since I arrived at Skydive DeLand for my first
tandem skydive.

Most Floridians probably couldn’t find DeLand on a map. However, the international sky-
diving community considers the city a major center for the sport, largely thanks to Skydive DeLand. The company manages the drop zone, books flights and operates a restaurant, gear shop and training facility. It also brings several world-class competitions to DeLand each year. For example, this Thursday through Sunday, Nov. 11-14, the Parachutists Over Phorty Society (www.thepops.org) will attempt a new world record skydiving formation. The following weekend, Nov. 18-21, some of the world’s top skydivers will compete in the multidiscipline Kaleidoscope Dives (www.skyquestflorida.com).

“You talk to skydivers from anywhere in the world, and they know about DeLand,” says Micah Couch, the camera operator who photographed my jump. At age 26, Couch has been jumping out of planes to take photos and video for eight years. He worked his way through several drop zones before alighting
in DeLand.

“DeLand has one of the most active drop zones in the world,” Couch says. “It’s just a great place to be if you’re a skydiver – there’s so much experience here, so much talent.”

In 1959, a local chiropractor founded a parachute club in DeLand. At the time, few commercial skydiving operations existed; enthusiasts hired planes and jumped using modified military parachutes. The sport has changed a lot since then, partly because of developments in DeLand, where 20 or so manufacturers of parachutes, helmets, electronics and other skydiving accoutrements operate along the airport industrial park’s so-called “Parachute Row.” Many of the sport’s pioneering visionaries can still be seen around town, like Bill Booth, who developed the equipment used in tandem skydiving. Booth is the last of a dying breed – a genuine American adventurer and entrepreneur with a legendary beard who lives in an earth berm house overlooking a lake just outside DeLand.

Bob Hallet piloted the plane that took me up to approximately 14,000 to 15,000 feet for my first jump. Hallet co-founded Skydive DeLand in 1982 and was soon partnering up with guys like Booth to revolutionize skydiving by developing training methods and gear that are now industry standards. Some 85,000 jumps are now made per year from Skydive DeLand. Not all the jumps are recreational; commercial and military operations also train there, which explains why there are a dozen guys from Qatar in the plane with me.

However, competitive and recreational skydiving tends to bring people together from all over the globe, says Carey Peck, son of Gregory Peck and the organizer of the POPS World Record attempt that will draw some 125 skydivers from all over the world to DeLand for the event. “You have this brotherhood of people from around the globe,” he says. “These jumps transcend everything – all the social and political barriers just don’t matter.”

This particular attempt will be a first for Hallet’s company; about 10 previous POPS attempts have been made in Perris, Calif. “There was a 100-way done in Arizona in 1999,” says Tim Webb, a DeLand resident who will be a captain on one of the planes. “The current record stands at 113, so we’re trying for 120 or more.” This will be a world record for this particular category of skydiver, he explains. The largest formation on record involved 400 skydivers over Thailand.

Getting 120-plus people to hold hands in the sky is no easy job, Webb says. The skydivers will practice on the ground to learn the intricate airborne choreography they hope will become an orderly human cloud. Five airplanes, each carrying 22 to 25 skydivers, will fly in formation to 18,000 feet – about 5,000 feet higher than a typical jump – whereupon the passengers exit and begin to “fly” into the formation they practiced on the ground.

Skydivers will assemble at 8 a.m. Thursday and probably begin their first attempt around 10:30 a.m. From the spectators point of view, the skydivers should be visible from the ground, depending on weather conditions. “A lot of times, you will hear it before you see it,” Webb says. “A formation that big is loud.”

“We won’t get it on the first try,” Webb laughs. “We hope to make anywhere from three to six attempts each day, so people who come out will get a lot of chances to see a whole lot of people at the drop zone at once. … There’s a big deck for that, and a restaurant with a big window looking out at the
landing zone.”

There are even better ways to appreciate what happens in the sky, Peck adds. “Most people don’t go to the video debriefing where we watch and critique what all those cameras in the air caught,” he says. “If you really want to follow the event, that’s the place to be.” Peck not only organizes the event, but plans to jump. “I love the teamwork aspect – the dynamic of working with a large number of like-minded people,” he says. “And the visuals of a 100-way formation, both from the ground and in the thick of it, is like nothing else in
the world.”