CHRISTMAS Look for us at Denny's. In the corner. All day. Weeping and slightly drunk.

KWANZAA After Christmas excess has been kicked to the curb, the celebration sprung from African-American culture kicks in. Kwanzaa, seven days and nights reserved for family-oriented fêting and feasting, starts today and ends Jan. 1. Based on African traditions and culture, Kwanzaa has a daily principle upon which to meditate: umoja (unity), kujichagulia (self-determination), ujima (collective work and responsibility), ujamaa (cooperative economics), nia (purpose), kuumba (creativity) and imani (faith). And even though the karamu feast is always supposed to be held on Dec. 31, the Orange County Regional History Center will host a "Celebration Karamu Feast & Candle Lighting" on Dec. 30, so as not to interfere with New Year's Eve. (By the way, according to the rules, Kwanzaa rituals aren't supposed to be moved around for other holidays, as that would violate "self-determination.") There will be fashion, dance, music and art, as well as African entertainment and the traditional karamu feast. And so you know, karamu is not the main course, it's the name of the festivities. (4 p.m.-7 p.m. Dec. 30 at Orange County Regional History Center; R.S.V.P. required, 407-836-8500; free)

MAT HOFFMAN'S CRAZY FREAKIN' STUNT SHOW Seriously miffed is how we feel about the crazy freakin' PR person for BMX rider Mat Hoffman who had the nerve to bribe us: Guarantee coverage and I'll try to arrange for you to talk to the extreme sports hero, she wheedled. Hey now, even if the guy has been "hailed as the greatest vert ramp rider in the history of sport" and he's "known worldwide for his legendary performances and competitions as well as his best-selling book and video game," the opportunity to exchange words with him isn't going to wow us into submission. So Hoffman, we're writing about your Crazy Freakin' Stunt Show because ... well, because there's not much going on the day after Christmas. So even if said PR person makes it sound like your head has grown too crazy freakin' big to balance on two wheels, there's a whole pack of other crazy freakin' extreme sportsmen – BMX riders Jay Eggleston, Tom Stober, Dave Voelker and Art Thomason, plus skateboarders Chris Gentry and Max Dufour – in the show that it almost makes it worth the price of admission to watch the possibility of bones breaking and brains splattering. (shows at noon, 1 p.m., 2 p.m., 4 p.m., 5 p.m. and 6 p.m. daily through Jan. 2 at the Toon Amphitheater, Universal's Islands of Adventure, 407-363-8000; free with park admission)

CHRISTMAS AT SEAWORLD So why would we recommend "a program of festive holiday music" featuring performances by the Orlando Philharmonic Orchestra, a kids' chorus and a finalist from American Juniors? Because we're in the freakin' holiday spirit and candy-floss performances like this, free from any pretense of being "real" classical music, are what the holidays are all about. We've been know to occasionally bag on the OPO's propensity to dumb-down its programming for public consumption (that "opera without words" and "classics with a twist" stuff is really annoying), and though this certainly qualifies as "dumb" we'd have to be pretty Grinch-y to complain. (7:30 p.m. at SeaWorld; 800-327-2420; free with park admission; repeat performances Dec. 27-30, Jan. 1, 2)

CLASSIC ALBUMS LIVE Granted, you're never going to hear The Beatles' White Album, Pink Floyd's Dark Side of the Moon or Led Zeppelin II performed by the original members ever again, but seeing a band cover those respective albums this Monday through Wednesday smacks of being a bit of a yawner – and an expensive one at that. We could understand (maybe) parting with some Christmas cash if it was a tribute or parody band like Zoso or Dread Zeppelin. But c'mon, a stage full of studio musicians grinding out "Money," "Whole Lotta Love" and "Dear Prudence" off sheet music? A laser-light show sounds more ballsy. While we agree that the aforementioned are classic albums, it's time to move on. Seriously. ("White Album," Dec. 27; Dark Side of the Moon, Dec. 28; Led Zeppelin II, Dec. 29; shows 8:30 p.m. at Hard Rock Live, 407-351-5483; $18, $20)

JANDEK ON CORWOOD We already devoted precious space in a previous issue ("A mysterious racket," Nov. 18) to espousing the weird greatness of Jandek and the Jandek on Corwood movie, but let us say it again: Jandek is a freak. He makes a freaky racket and this movie is a relatively non-freaky documentary about him and the mystery that surrounds him. Thank god they'll be serving drinks. (8 p.m. at The Peacock Room, 407-228-0048) 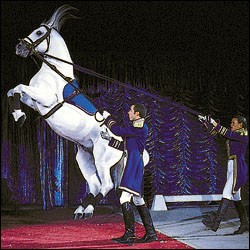 LIPIZZANER STALLIONS Its visibility in these parts ordinarily limited to carting Arthurian impostors around in medieval jousting tournaments, our old friend the horse assumes a momentarily loftier role in the show-biz pantheon when the Lipizzaner Stallions World Tour arrives in Central Florida this week. In anticipation of their 35th anniversary as a performing entity next year, the world-famous mighty stallions will be seen in a two-hour extravaganza of balletic and military maneuvers that will reflect the Lipizzan's centuries-old standing as the steed of the elite. For an indication of how grand the high-stepping presentations can get, peep this description from the tour's official literature: "The Lipizzan is the aristocrat, the royalty, the light and nimble dancer and the aerialist of the equestrian world." Fair enough, but can one of them dial a phone with its nose and charge a 10-pound bag of oats to the name Wilbur Post? Didn't think so. (7:30 p.m. at Silver Spurs Arena; also 3 p.m. and 7:30 p.m. Dec. 29. Additional shows 3 p.m. and 7:30 p.m. Dec. 30 and 3 p.m. Dec. 31 at Ocean Center, Daytona Beach, and 2 p.m. Jan. 2 at TD Waterhouse Centre; tickets for all shows $16.50-$26.50, available through Ticketmaster, 407-839-3900)

SHINEDOWN/CROSSFADE We tried coming up with something witty that played on the fact that these two bands have quite similar two-syllable names completely devoid of meaning. And then we started thinking about the incredibly boring, anonymous, washed-out radio rock that both bands play. And then we stopped thinking completely. (with No Address; 7 p.m. at House of Blues, 407-934-2583; $23.50 - $51)