Christmas Crazy: The Man Who Came to Dinner - William Keighley (1942)

Monty Woolley stars as an unwanted house guest who comes to take over the lives of his hosts, and Bette Davis as his put upon assistant in William Keighley's The Man Who Came to Dinner, a testament to the kind of quick-paced one liner that only the British (and really only Armando Iannuchi & Co) seem to get right these days. While on a winter speaking tour of the Midwest, Sheridan Whiteside (Woolley, who originated the role on Broadway) is set to dine at the home of the Stanleys, a well to do Mesalia, Ohio family whose money comes from Word War II defense contracts. Mrs. Stanley (Billie Burke) is thrilled that a little culture is coming through her small town, but Mr. Stanley (Grant Mitchell), playing a sort of later day Eugene Pallette (The Lady Eve, Heaven Can Wait) role as the uncouth husband who happens to find himself moneyed and isn't all that comfortable with it, is a wholly unwilling participant to the idea of "society". Whiteside is an erudite New York radio personality, critic and writer, made in the mold of Alexander Woollcott, whose fellow Algonquin Round Tablers lit up the radio waves and gossip rags in the 20s. He is quick witted and sharp-tongued, just like the real Woollcott (who really took over playwright Moss Hart's estate one weekend), and the Stanleys are not ready for such a whirlwind personality, not even Mrs. Stanley, who looks positively crestfallen that Whiteside isn't a perfect gentleman. Sherry, as his friends call him, suffers fools and hicks very badly, I'm afraid, and his acerbic tongue finds plenty of both to whip to the borderline of tears when, after taking a tumble down some icy stairs, he is stranded, wheelchair ridden, in the Stanley's home under Doctor's orders.
click to enlarge

If that set up sounds familiar, it's because Rodney Dangerfield stole it in the late 90s for his woefully bad (but still kind of funny -- respect, Rodney!) Meet Wally Sparks. The Man Who Came to Dinner was penned by Julius and Philip Epstein (2/3rds of the Casablanca fame, along with Howard Koch), based on the stage play by George S. Kaufman and Moss Hart. As great as Rodney as his writers were at one liners -- and both movies really are vehicles for the one liner -- they don't match the Brothers Epstein, or Woolley, who is so perfect for this role that you will spend half of the time hoping he doesn't look through the screen and start unleashing on you too. Despite appearances, Sherry's -- who really isn't injured, by the way -- life is something of a house of cards being held together by Maggie (Bette Davis), his personal secretary, confidant, sounding board and punching bag. Davis rolls along with every punch and insult that Whiteside throws at her, perhaps seeing the insecure teddy bear underneath the gruff, bearded maniac persona he gives off. In fact the only thing that threatens to throw Sherry's life into disarray is her leaving him -- something she probably knows all too well -- which threatens to come true when, looking for an interview with Whiteside for his small newspaper, Bert Jefferson (Richard Travis) comes into her life and rather clumbsily sweeps her off of her feet -- literally, on ice skates, and figuratively with a conversation about his play over a roasted sweet potato. Jefferson is the kind of role that Jimmy Stewart would have played if it wasn't so small in comparison to Whiteside. He is the consummate unassuming charmer, all good-looking gee-whiz naivete, the kind that movie dames always go shaky at the knees over. They need to be mothered as well as loved and the girls, even the smart, tough-as-nails ones like Maggie, are happy to do both. Lucky son-of-a-guns. Everything comes to a head on Christmas, though. Sherry has employed the considerable sexual prowess of gold digging actress Lorraine Sheldon (Ann Sheridan) to charm her way into Bert's play, thus cutting the last strands of love between Bert and Maggie and retaining her secretarial services. Maggie -- smart as a whip, as I mentioned -- sniffs out Sherry's evil plan, though, and throws up a few roadblocks for Lorraine along the way, and Sherry, with the help of Banjo (Jimmy Durante -- based on Harpo Marx), must figure out which is really more important: the order to his life, or Maggie's happiness.
click to enlarge 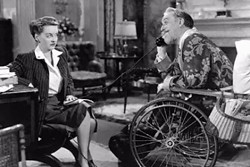 It's entirely surprising that joke-a-minute film like this can retain its freshness and relevance after 60 years, but it does. None of the jokes feel dated, and even the cornier lines are delivered with such a snap by Woolley that they seem to almost draw blood from the recipient. Durante's Banjo is a hit of crystal meth injected into a cocaine-paced film, and it's not entirely welcome, introducing a song-and-dance from nowhere, and a new big personality into a frame that can only hold one at a time. The film belongs to Whiteside, and Banjo takes away from that as he gnaws on the scenery and reduces Woolley to a temporary spectator, but by the time he's introduced the film has already sunk it's venomous fangs deep enough into you that it can be forgiven. There are some conveniences to the plot that land with a thud, but can also be ignored because of the dazzling skill and pop of the jokes. Much like The Ref, The Man Who Came to Dinner is a Christmas film for those of us not entirely enamored with the holiday. In the book Christmas at the Movies, H. Mark Glancy calls it "Hollywood’s most cynical Christmas film," and, really, what holiday doesn't need a cynical film, especially one as hilarious? [youtube 9fMcWKXVkQU]