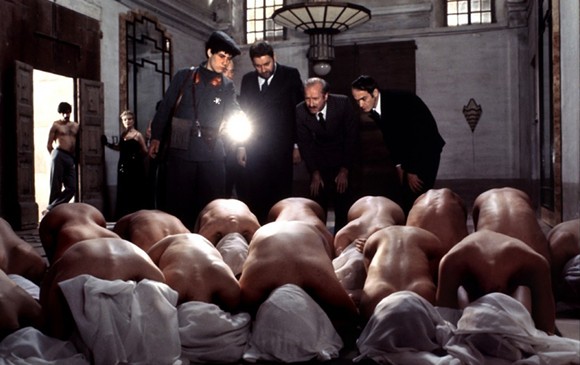 While religious nuts may pretend to get up in arms over the “War on Christmas,” we hear nary a marshmallow Peep out of them over the “Defanging of Easter.” For a holiday based on cannibalism, torture and the undead – in that order – modern Easter sure is cuddly: It’s become a day devoted to fancy hats and rabbits who lay chocolate eggs (which bathroom should they use, Florida Legislature?). Uncomfortable Brunch is fixing that, not with the obvious The Passion of the Christ, but with Pier Paolo Pasolini’s final film, Salò, or the 120 Days of Sodom. Based on the Marquis de Sade’s unfinished book, the film chronicles the depravity of four Italian Fascists and the horrible things they do to a group of young boys and girls. It can be seen as a graphic metaphor for the treatment of the proletariat by the ruling classes – which is probably part of how ardent Communist Pasolini intended it – or as a fucked-up pseudo-snuff film –which is how the review boards of many countries viewed it upon its release, promptly banning it. As always, brunch is included with admission, but, uh, you may want to finish it before the film starts.