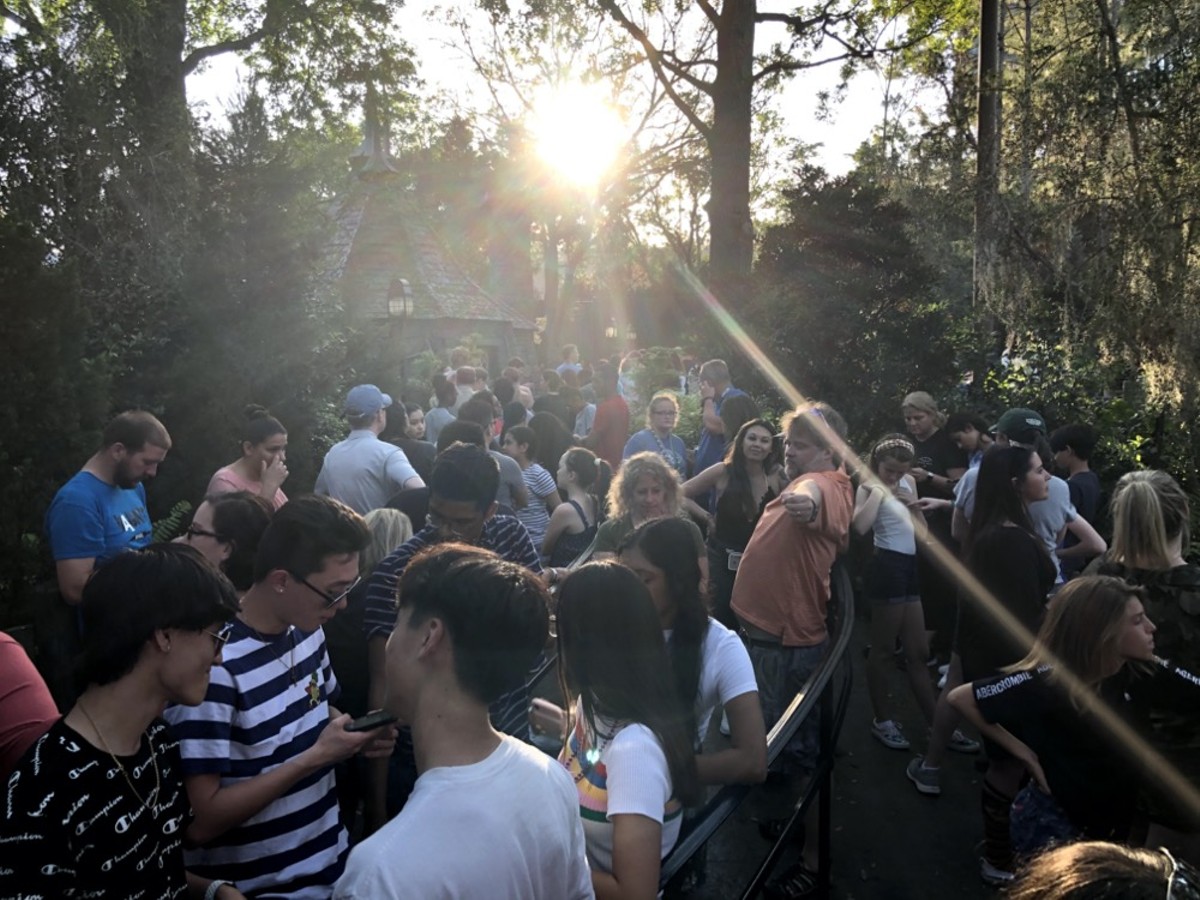 Saturday at Disney's Animal Kingdom, even a global crisis couldn't knock the wait time at Flight of Passage below an hour. Photo by Seth Kubersky

It may seem like a lifetime ago now, but it was actually only last week when I naively reported that the accelerating COVID-19 pandemic couldn't derail the debut of Disney's new Mickey & Minnie's Runaway Railway ride. Of course, barely 24 hours after that column hit newsstands, the dominoes began to fall faster than elevators in the Tower of Terror: First Disneyland announced an unprecedented extended closure of its theme parks, and then Walt Disney World and Universal Orlando followed suit hours later, in the most chaotic day I've experienced in my decades as an attractions observer. By the end of the week, even SeaWorld – which had initially responded to the crisis with a Florida resident "staycation" special – reversed course and planned to shut down, leaving Fun Spot and the Icon Park observation wheel as virtually the only attractions still operating in Orlando.

Mickey seemed surprised that I declined his hug, preferring a fist bump.

Assuming you're a sane person, you probably didn't hear the news about the resorts' imminent operational pause and instantly grab your MagicBand for a last lap on your favorite ride. (If you did, you've probably got your own YouTube channel.) As a professional travel journalist living at the industry's epicenter, I felt obligated to document such a historic moment. For the record, I'm healthy, I don't have close contact with anyone elderly or immunocompromised, and I washed my hands obsessively between every interaction.

My first stop was at Disney's Animal Kingdom, where even a global crisis couldn't knock the wait time at Flight of Passage below an hour. I spent the day checking in with the park's cast members, human and otherwise, and was repeatedly ensured that the full-time veterinary staff would continue caring for their charges throughout the closure and had months' worth of feed and supplies stockpiled, including acres of greenery and coolers of produce. Although Mickey seemed surprised that I declined his hug, preferring a fist bump, most DAK employees I encountered expressed confidence that the Mouse would take care of them through the crisis.

In contrast, when I visited Universal Orlando for the premature finale of their 25th annual Mardi Gras celebration, conflicting management messages had staff confused as to whether or not they should show up for work on Monday. Despite the backstage chaos, Universal's team members did a remarkable job of creating an eerie illusion of normalcy; at least for a few minutes, the young man I watched receiving his magic wand at Ollivanders wasn't thinking about coronavirus, and neither was I. But to be frank, I bolted before the evening's Big Easy parade, having decided that rubbing elbows with strangers for plastic beads wasn't in my best interest.

Photo by Seth Kubersky
I also visited Universal Orlando for the premature finale of their 25th annual Mardi Gras celebration.

Publicly, Universal and Disney have both said that they plan on reopening their parks by the beginning of April, but my gut says their gates will remain closed for longer than that. At Epcot alone, Disney has terminated the contracts of veteran World Showcase performers (including Japan's Matsuzira drummers and the British Revolution band) and abruptly suspended their cultural exchange and college programs, forcing thousands of young workers to vacate their housing on four days' notice.

To me, those don't sound like the actions of a company that thinks they'll be back to business as usual in a fortnight.

On Sunday afternoon, instead of returning again to the parks, I attended one of the final live performances to be held before Central Florida's theaters shut down indefinitely. Ordinarily, a middle-brow movie adaptation like 9 to 5: The Musical wouldn't be high on my must-see list, but the closing matinee of Athens Theatre's spirited production turned out to be exactly what I needed before heading into semi-isolation. A monumental mod scenic design by Tori Oakes, illuminated by Chad Erickson like a massive '70s light organ, lent this DeLand troupe better production values than half the Broadway tours I've seen at Dr. Phillips. And the enormous ensemble – led by Laurie Sullivan, Bernadette Siudock and Grace Boynton in the roles originated by Lily Tomlin, Dolly Parton and Jane Fonda – gave a heartfelt final performance to a modest but appreciative audience.

I spoke with Frank Ramirez, the show's director and resident production stage manager of the Athens, over what was might be my last meal in public for the month. The venue went dark after Sunday's closing bow, canceling rehearsals until at least March 24, although they hope to still open their season closer, Mary Poppins, on April 17 as scheduled.

"It's impacting us all personally as well. We can't have work things on our minds, so we're allowing time for everyone to get their lives in order and re-evaluate," Ramirez says, adding that they've secured permission to live-stream their production if necessary. "We're taking it week by week."

So say we all.