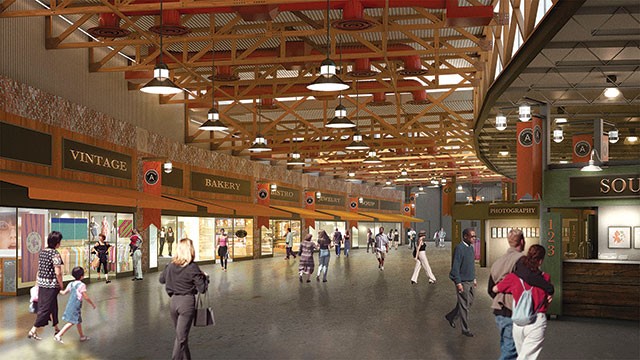 Aside from arts and attractions, my interests include classic Romero zombie films, urban exploration (usually vicariously via Adam the Woo’s YouTube videos) and shopping schadenfreude. Combine those three and you have the fascinating phenomenon of “dead malls”: Google the phrase for dozens of sites devoted to eerie abandoned emporiums, filled with photos of abandoned food courts and shuttered storefronts serving as silent monuments to retail overreach.

Orlando’s International Drive was, until recently, host to one of the finest examples of slow-motion mall extinction: the Festival Bay Mall. The center boasts 140 acres of prime real estate at the north end of the busy tourist corridor, ample free parking and one of Orlando’s nicest movie theaters, along with a lineup of popular blue-collar anchors like Bass Pro Shops and Sheplers Western Wear. But when Festival Bay’s intended 2000 opening was delayed by several years, it was eclipsed in the local market by the Mall at Millenia and Florida Mall and has never managed to fill its leasable space. On my most recent visits, the interior was a wasteland of empty corridors and “We’re Still Open!” construction walls blocking off entire decommissioned wings, with only a discount bookstore and blacklight putt-putt near the cinema still struggling along.

Enter Artegon Orlando, the in-progress project from current property owners Paragon Outlets that aims to transform the floundering Festival Bay into Orlando’s answer to New York City’s Chelsea Market, Pike Place Market in Seattle and Faneuil Hall Marketplace in Boston. The same team that developed the spectacularly successful Prime Outlets (now Simon’s Premium Outlets) is reimagining the nearby mall as an indoor artisan bazaar. Instead of importing famous brands from around the world, it will send visitors home with Orlando-made products and artwork.

The remaining anchors will stay through at least 2025 and will be joined by a redesigned skate park, Revolutions bowling alley, the Berghoff German restaurant and a Toby Keith-branded bar and grill. But everything else about Festival Bay is under the knife, starting with the bay itself, which has been drained for conversion into an 80,000-square-foot entry plaza with valet parking and green event space. Judging by the concept art, the entire complex will have the currently trendy industrial aesthetic, all exposed I-beams, corrugated steel and polished concrete. Inside, the central stores are to be gutted and replaced with cage-like booths, which will be rented to local handcrafting retailers like Misty Wheeler-Belin’s Florida Soap and artists like Robin “R.V.” Van Arsdol, both of whom participated in a recent Artegon open house I attended.

It’s ambitious, bordering on hubristic, to engineer an environment that purports to compare with an organically evolved institution like Istanbul’s Grand Bazaar, but if anyone has the enthusiasm and expertise to make it happen, it’s Artegon executive vice president Steve Sless. I spoke with Sless after his presentation to potential tenants and was impressed with how passionate he is about the potential benefits for artist-vendors, who will be “the heart” of the project. Just don’t mention the “F word” to him; he insists that the participants will be curated carefully to avoid a flea market feeling. He also says they aren’t attempting to compete with art fairs or galleries, but to “be another vehicle or venue for artists to make money,” adding, “We are here to make money, but not on the backs of the artists.”

So far, all but 50 or so of the 165 booths that will open Oct. 16 in Phase 1 have already been filled; another 100 will become available in Phase 2. Confirmed tenants include jewelers, airbrush artists, skateboard crafters, hot sauce makers and leather workers – even a glassblowing studio. All tenants pay $187 per month, which covers common area maintenance, electricity and security; a $400 standardized signage package for your booth’s facade is also mandatory. Beyond that, retail vendors can pay $1,000 to $2,200 per month, depending on booth location, while artists selling their own work can opt for a commission fee said to be below 30 percent. The complex will operate 10 a.m. to 9 p.m. Monday through Saturday and 11 a.m. to 7 p.m. on Sundays, but marketplace tenants will only be required to open 11 a.m. to 8 p.m. Monday through Saturday.

It remains to be seen whether Artegon can attract the critical mass of foot traffic needed to sustain profitability, especially since the demographics targeted by its anchors seem at odds with the unique artisan offerings inside. But if they can find the right balance of occupants and spend their seven-figure marketing budget wisely, Artegon could turn into a tremendous opportunity for Orlando’s emerging artists and crafty entrepreneurs. For more info, visit artegonorlando.com and register for the free seminar at 7 p.m. on July 29.