We're not even out of August yet, and Central Florida's annual Halloween event wars are already well underway. In recent weeks, Universal Orlando has been steadily releasing information via social media about the new haunted houses at Halloween Horror Nights 24, which gets underway on September 19, but today their nearest regional competitor was the first to reveal details on their lucrative up-charge add-ons. Busch Gardens Tampa has announced pricing for 2014 Howl-o-Scream VIP tours and other extra-cost items.

Here's the breakdown of your front-of-the-line options at Howl-o-Scream this season, direct from Busch Garden's press release:

All-inclusive VIP Packages include event admission, a tour guide and a choice of three levels of special treatment. All tours include commemorative photos, merchandise discounts and complimentary beverages. Packages start at $99, and Busch Gardens® Tampa Pass Member discounts are available. 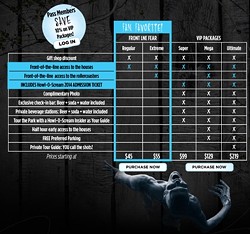 Universal has yet to announce VIP pricing for 2014, but Busch Garden's add-ons are generally less expensive that the equivalent HHN up-charge. The flip side is that Howl-o-scream is consistently much less crowded than Universal's event, making the VIP privileges less valuable. I've had good experiences is past years with the Fright Feast option, which provided passable food and allowed me to see every haunted house by 9 p.m. I also enjoyed last year's Experiment, though it's only a good value if you can recruit 2 or 3 friends to accompany you. If you go without the add-ons, I advise arriving an hour before the event starts, and visiting as many houses as you can before lines get long, saving the rest until the end of the night.