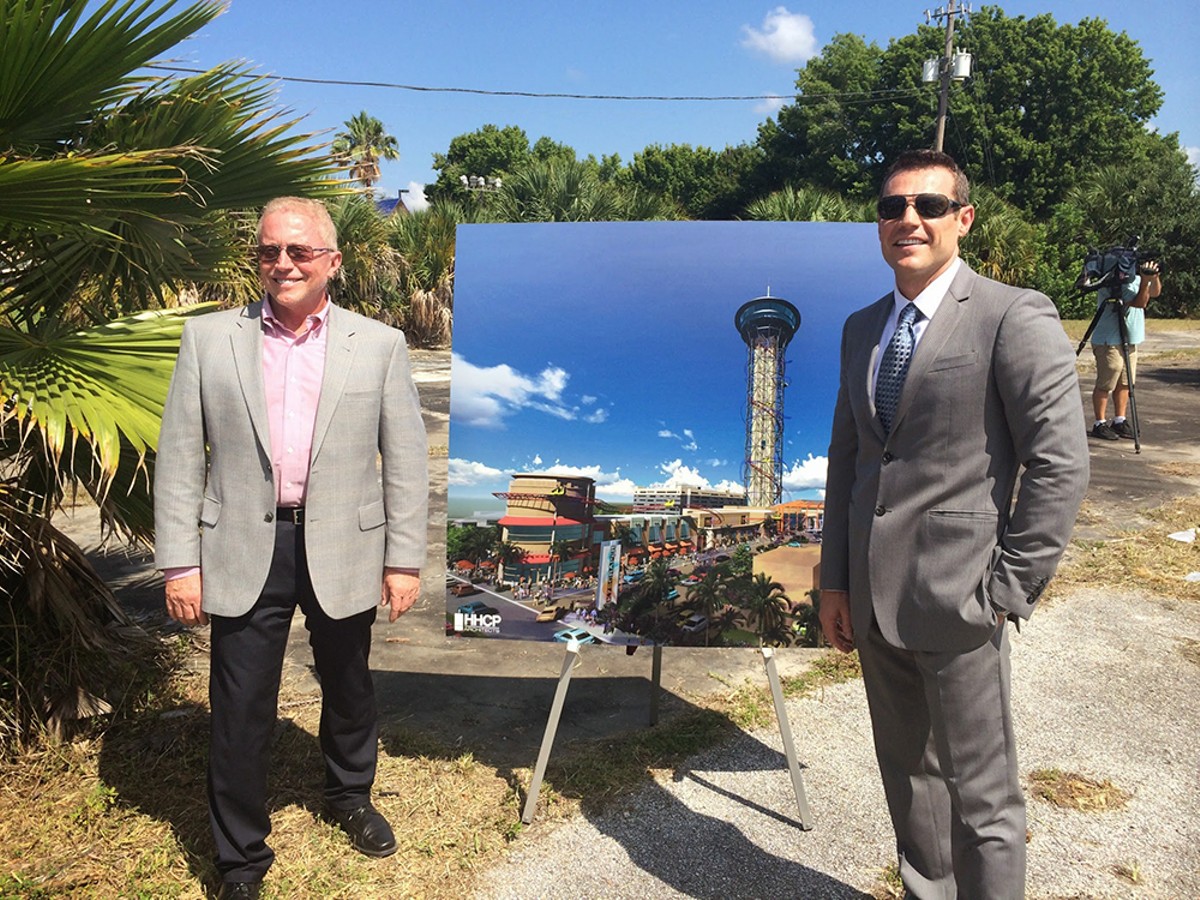 At last month's International Association of Amusement Parks and Attractions Expo, Universal Orlando executive John McReynolds was inducted as IAAPA's new chairman. Yards away on the show floor, ride manufacturer Intamin was advertising the Polercoaster, the world's tallest roller coaster, which they hope to build in Orlando as the Skyscraper, the centerpiece of north I-Drive's proposed 700-foot Skyplex tower. All was civil between the companies inside the Orange County Convention Center, but outside a war was being waged in neighborhood mailboxes, as "Save Our Orange County Community" (a group backed by Universal) distributed flyers claiming Skyplex would "change the character and face of our community forever" and set "an ominous precedent for future projects of this magnitude."

Shortly before the Dec. 1 county commissioners' meeting, which could seal the fate of Skyplex, I interviewed Bill Kitchen, founder of U.S. Thrill Rides and designer of the Polercoaster, to get his perspective on the controversial project.

Kitchen on ... potential visual intrusion and light pollution caused by Skyplex: "We don't think it's a visual intrusion at all, and even if it's a slight intrusion, Universal does not own the sky for miles around the park. There's only one company that ever has and that's Disney, because they bought 28,000 acres.

"It will be subtly illuminated. In this case, the phrase 'light pollution' is a meaningless soundbite. Light pollution really refers to the overall brightening of the sky, and we would have a completely negative effect. ... Orlando has more light pollution than any place in Florida already. What we think is that it will be an attractive addition to the skyline, an icon that will draw more tourists to the I-Drive corridor.

"This is not going to be lit like the Eiffel Tower is now, with a beacon and all the flashing lights. ... This is going to be tastefully lit with architectural lighting. There will be no LEDs or flashing bulbs."

Traffic congestion around Skyplex: "Anyone who drives around I-Drive or Sand Lake Road in the evening is going to ascertain that the worst creator of traffic is Universal, so this is an absurd case of the pot calling the kettle black. Not only have they created enormous traffic congestion already, but if you drive by, even from I-4 you see cranes everywhere. They're building thousands of new hotel rooms; they're building a new water park.

"[Skyplex developer] Josh Wallack is absolutely correct that what we need in that neighborhood is a pedestrian environment where people can park their cars and move among various attractions.

"It's all about economic growth, and the people who want to visit these places have to realize that traffic is an issue."

Competition and Universal Orlando's parent corporation: "Comcast is a multibillion-dollar company, and incidentally one of the two most hated companies in America. The reason is that almost all of their cable service is a monopoly, and their customers complain about the quality. Is this not the same company that is now trying to monopolize north I-Drive?

"I think that the real problem is that they chose a community to build in where their height was limited to 200 feet, and they just don't want the world's tallest (and we believe the world's most exciting) roller coaster to be a mile and a half away from them.

"We don't believe that we'll have a noticeable impact on their attendance at all. In fact, most of our customers will come to see us in the evenings after they've already left one of the other parks.

"Universal is a great group of parks; I take my friends there all the time."

If the Dec. 1 county commission meeting goes in Skyplex's favor: "If they give the green light, Universal has already told a number of people that they will to continue to oppose it using lawsuits if necessary. They've already filed one lawsuit against the county [over stormwater easements]. We think it's super nitpicking and trivial, but nevertheless it causes confusion.

"It's just another delaying tactic that will be resolved, but you can bet that they'll come to the next meeting with some new proposition that can delay the vote while we work out some new problem, and they'll basically include some veiled threat of legal action against the county if the vote occurs."

If commissioners reject Skyplex's proposal: "We can always come back to them again with new information or a revised proposal, and we certainly would.

"I do believe we'll get a fair hearing and that the outcome will be positive, [but] the owners have already acquired the rights to build this in some other really big markets. It will be up to the county commissioners whether the world's largest roller coaster and a beautiful icon comes to Orlando or someplace else."

Skyscraper's first riders: "I'm 67 and I'm still crazy about roller coasters. The first car out will have a couple of the owners, me, my son and my cardiologist. But I'll be on it!"