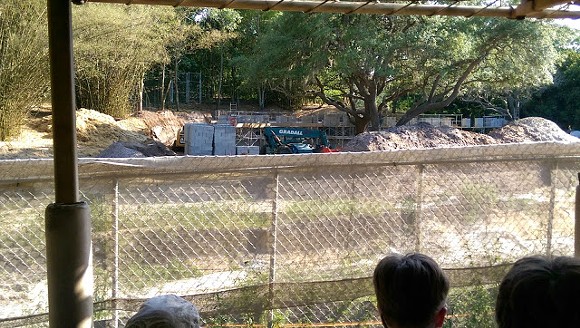 Photo via Jambo Everyone
While most of the focus on Disney’s Animal Kingdom has been on Pandora - The World of Avatar and the new night time show, Rivers of Light, Disney has also confirmed another major new addition to their animal-focused theme park.

A new ‘sunset’ safari will include new lighting that is currently being installed throughout the attraction. Jambo Everyone, an unofficial, fan-based site and podcast focused on Animal Kingdom, were the first to report on the sunset safari and is reporting new roadwork within the central savannah is related to the new safari experience. The new bypass will mean certain daytime animals will be cut from the new tour, including the mandrills and the bull elephant. When the new bypass opens, the long broken rickety bridge– which, when working properly –gives riders the feel of the bridge giving way as you cross it, will be fixed. This means that the back part of the ride will cut from the daytime safari for a short time as well.

The Singapore Zoo has a popular night time safari that uses artificial moonlight to cast a white glow on the exhibits. Unlike that exhibit, the new Animal Kingdom version will feature an ‘orange glow’ that simulates the colors of the setting sun.

With certain animals cut from the safari, new nocturnal animals will be added that will only be featured in the sunset safaris. African wild dogs and hyenas will both be added to the new ride. Jambo Everyone has been reporting for many months that both animals are already backstage adjusting while the animal caretakers also adjust to the new animals.