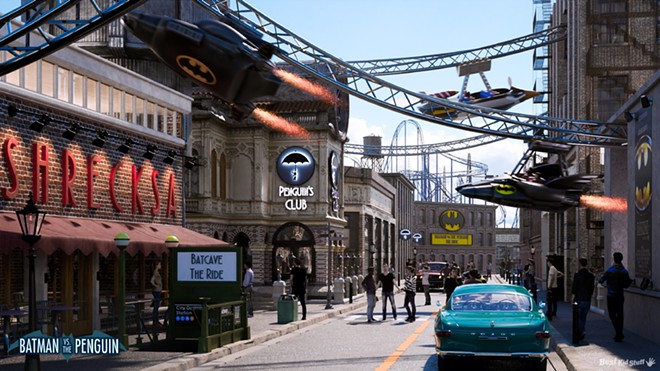 Image Best Kid Stuff
The Batman vs. the Penguin ride proposed for Universal
As part of the development process, designers at Disney and Universal are frequently tasked with designing attraction concepts that are never realized. This leaves behind a trail littered with thousands of unique concepts, including some that are extremely detailed and nearly shovel-ready. Now a website, Best Kid Stuff, has imagined what five of those never-realized attractions would look like in real life.

The realistic-looking 3D renderings are our best look yet at these long-shelved attractions. The group gathered public documents and information from the designers involved with the attractions, then synthesized this information into a single hyper-real image of what each attraction may have looked like.

Two of the five come from Disney World.

Space Jetpack Ride was meant to replace Horizons at Epcot. The attraction was planned for the cavernous building that housed the former attraction. It was to be a suspended coaster-style ride where guests donned ‘jet packs’ to explore a space station via a simulated spacewalk.

By the end of the 1990s, Disney was beginning conversations with Compaq to sponsor the pavilion. The talks eventually led to the space-themed simulator ride, Mission: Space, that remains in the park today. Disney did ultimately build a ride based on jetpacks. The aptly named Jet Packs spinner attraction is located in the Tomorrowland section of Shanghai Disneyland.

Image Best Kid Stuff
The Space Jetpack Ride concept that was to replace Horizons at Epcot
The second entry from Disney World is the Fantasia Gardens boat ride, meant to be part of the Beastly Kingdom land at Disney’s Animal Kingdom. The land was envisioned as the home of the imaginary creatures. As costs rose, the land was cut.

Some of the Imagineers working on the project moved over to Universal, where many of the Beastly Kingdom concepts were later realized as part of Islands of Adventure’s Lost Continent. This included that land’s dragon-themed roller coaster. While the dragons were never brought to life in Animal Kingdom, references to them can still be seen throughout the parking lot and entrance area.

The other three concepts that Best Kids Stuff imagined all come from Universal’s Islands of Adventure. Prior to their extremely beneficial contract with Marvel, Universal looked at using DC Comics for Super Hero Island. The two main franchises for the island were Batman and Superman. 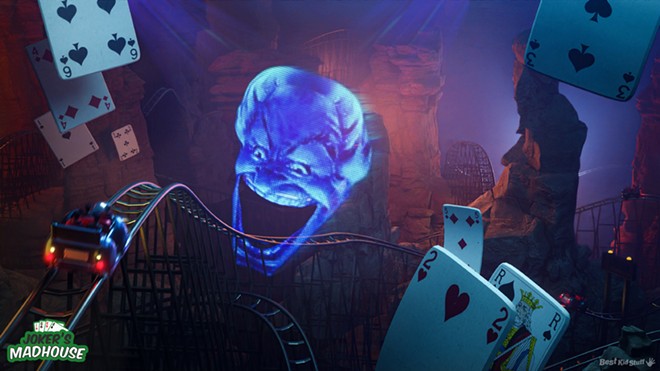 Image Best Kid Stuff
The Joker's Madhouse attraction proposed by Universal
Batman was to be featured in two rides, the first being a dueling suspended coaster themed to Batman versus the Penguin. Another Batman-themed attraction, this one an indoor coaster, was to be themed to the Joker. The coaster would include multiple visual effects as riders tried to escape from the Joker's warehouse. 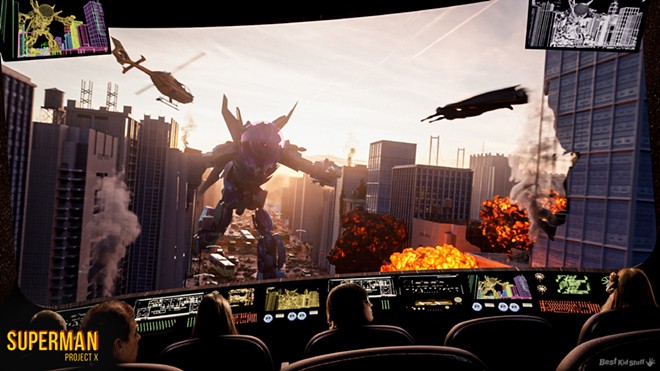 While Universal never built any of their DC Comics-based attractions, both Superman and Batman-based lands can be found at Warner Bros. World Abu Dhabi. A walk-through attraction based on the Joker's Funhouse shares many of the same visual gags planned for the Orlando coaster. A Superman-based 3D attraction and a Batman attraction that uses technology similar to the ride systems used on Harry Potter and the Forbidden Journey are also found in the Warner Bros. park.

With little chance of these long-shelved projects will ever see the light of day, these renderings by Best Kid Stuff are likely the closest we’ll ever get to experiencing these attractions.