At the Henao Center, three artists post a lament against the rot of consumerism

North Edgewater Drive's high energy retains the yesteryear charm of commercial strips before they became inflated with Targets and Starbucks. Cheek-by-jowl with taverns and thrift shops lies an older, blue-awninged structure right on the sidewalk, beckoning pedestrians who long ago vanished in the haze of automobile exhaust. Inside the Henao Contemporary Center is one of our newest galleries, hitting its stride with Consuma + Dos, an eloquent lament against the rot of consumerism that has so demoralized our culture.

Carlos Barberena, Patrick McGrath Muniz and Kevin Haran each contribute a voice to the lament. Haran has made a study of war and destruction in his career as an artist, and his sculpture populates the gallery's center. Haran's military machines – tanks, battleships, halftracks – are made of cereal boxes, applying Madison Avenue marketing genius to weapons of war. Their bright energy is at first satirical, but the more one gazes down a tank's gun barrel, the less one sees these as toys. Instead, a sense of death creeps in, oddly reinforced by the Lucky Charms-like green of the vehicle.

McGrath works from Houston and has exhibited a running commentary about hollow narcissism using the Mexican religious art form of retablo. Each piece is a highly crafted, self-framed tablet on which a scene is painted in the manner of Caravaggio, Leonardo and the old masters. McGrath has honed his underpainting technique, starting with shade and shadow and then adding color, celebrating a viewpoint that is darker, both in his treatment of light and his viewpoint of humanity. 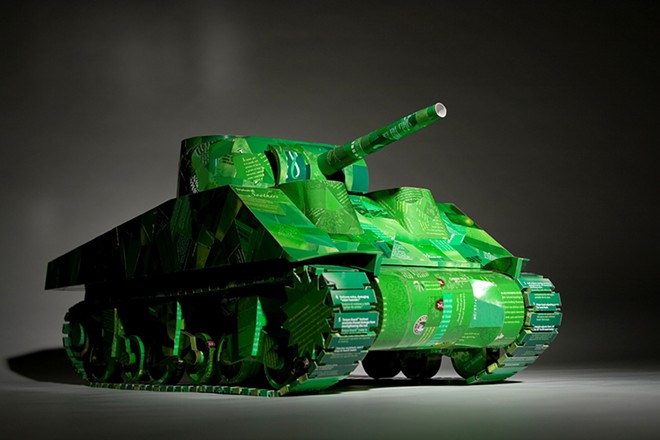 In contrast to McGrath's burnt umber and alizarin crimson, Barberena is a black-and-white kind of guy. A Chicago artist originally from Nicaragua, he works in the traditional art form of linocut prints and engraved portraiture. "Madre de Desaparacido" is posed as a traditional saint, but is the mother of a "disappeared one": someone removed by the authoritarian regime. Long years of utter despair etch deep grooves of sorrow on her face as she holds a portrait of her son.

Elsewhere, a death's-head skull replaces George Washington's portrait on the dollar bill; Coca Cola is helpfully renamed as "diabetico"; and Botticelli's Venus has donned a gas mask, all of it rendered in a Latin folk-art style. Relentless capitalism, for those on the outside, ain't so hot.

Like a good cup of Greek coffee, the unified message of this show is dark and strong. Life's a ball, but it's a hollow ball, decorated on the outside with the accoutrements of consumerist society, dark and empty within. Make the trek to see Consuma + Dos before it closes, and if you see yourself in some of these images, don't be surprised. 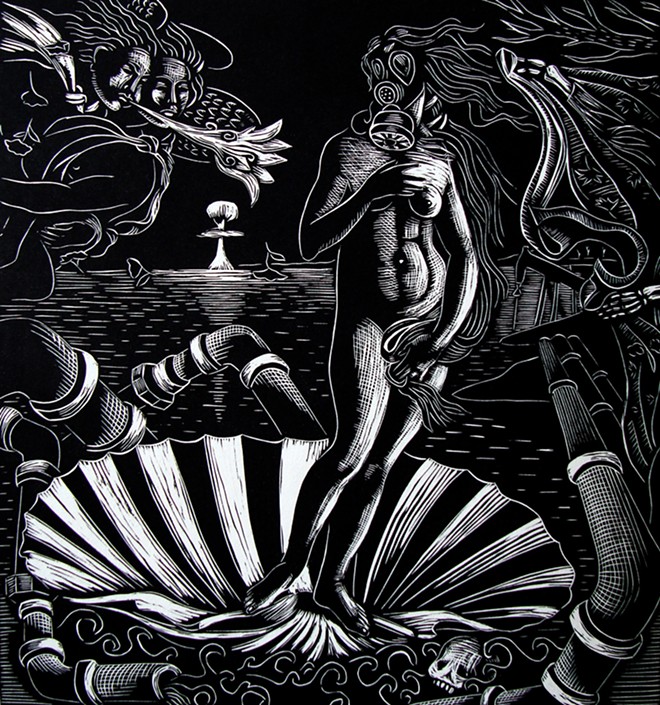