Performed by the University of Florida Carillon Studio. pic.twitter.com/jbDOlVS92b


In a gospel-tinged clapback at white supremacists descending on the University of Florida campus Thursday for Richard Spencer's speech, the school's carillon bell tower played a song known as the "Black National Anthem."

WUFT reporter Arnae Holcomb captured several seconds of the song playing from UF's Century Tower. Hundreds of students and community members from UF and across Florida protested Spencer's speech inside and outside the auditorium.


Leaving my @WUFTNews shift I walked through Turlington and heard the Negro National Anthem playing from the clock. Thank you for that @UF pic.twitter.com/B9SeW17zLi


"Lift Every Voice and Sing," also known as the "Negro National Anthem," is a century-old song with origins in Florida. In 1900, James Weldon Johnson, a Jacksonville native, wrote it as poem for 500 school children in his hometown to recite on President Lincoln's birthday. Johnson, an accomplished creative figure in the Harlem Renaissance community, was the first African American admitted to the Florida Bar. 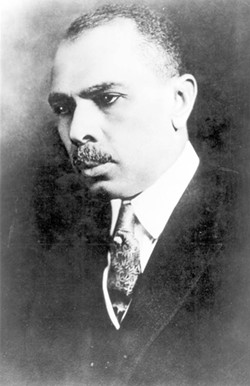 Photo via Florida Memory
James Weldon Johnson
In a time of lynchings, Jim Crow laws, segregation and racial terrorism against African Americans, the hymn was written by as a song for the children of a generation freed from slavery who were still determined to continue the fight to secure their rights as American citizens. The lyrics were set to music by by Johnson's brother, John Rosamond Johnson, and the song was quickly adopted as a civil rights anthem by the NAACP. Although some critics have interpreted it as separatist and divisive, others see it as a hopeful anthem on the promise of a better tomorrow.

If you've never heard it before, it's a bittersweet spiritual with piercing lyrics that stays relevant. In the 100 years since its creation, it has been adapted by black artists dozens of times, including versions by Ray Charles, Al Green, BeBe Winans, Aretha Franklin and Melba Moore.

Check out this trippy, space-inspired version with every 90s R&B artist you can think of.