As the park preps its Guardians of the Galaxy's ride to open, a new chapter of Epcot's overhaul begins Image via Bioreconstruct | Twitter
This view looking from the monorail towards the Festival Center shows construction is progressing in the World Celebration area.
With an impressive new nighttime show, two new attractions, three new dining venues, and a massive new front gift shop all opened or opening by this summer, Epcot’s initial overhaul is wrapping up.

A new chapter to the park’s revamp is about to begin, however. While it won’t see the headlining grabbing attractions this current work sees, this next chapter will add many more family elements to one of the least kid-friendly theme parks in all of Orlando.

Image via Bioreconstruct | Twitter
The upcoming Connections Cafe in Epcot's World Celebration neighborhood
We’re less than three months from the expected opening of Epcot’s Guardians of the Galaxy: Cosmic Rewind. With that project almost open, focus on the park’s update has begun shifting to other projects. Earlier this month, Disney CEO Bob Chapek confirmed other projects were still in the works for Disney World’s second-oldest park.

At a shareholders meeting earlier this month, Bob Chapek laid out his vision for the future of the Disney company, based on the three pillars approach he first rolled out at the start of this year. During a Q&A section, Chapek expressed optimism that projects which were forced to be put on hold during the heat of the pandemic will soon be greenlit once again. In those comments, Chapek specifically mentioned the Mary Poppins-themed attraction at Epcot.

The Poppins attraction, believed to be an indoor flat ride surrounded by high-definition screens, was one of nearly a dozen projects across Epcot that have been delayed or canceled since the park’s overhaul was first announced. Designed as a speedbump for families racing to the back of the park to experience the Ratatouille ride, the Poppins attraction was always an afterthought in the Epcot plans. When the Parks and Resorts division was forced to cut nearly a billion dollars from their development budget, this was among the projects that were quietly deleted and was thought to have been canceled altogether.

The park also saw its multi-level Festival Center disappear, with some more recently saying this area may instead become an outdoor beer garden. But, like Poppins, the future of the Festival Center is now thought to be potentially moving forward, though the design of the design may have been value-engineered since the initial concept was announced.


Across from the Festival Center is Dreamers Point, the garden where the statue of Walt Disney will sit. This garden area has seen an increase in construction activity. This garden will be the heart of World Celebration, the central land guests first enter when visiting Epcot. Moana's Journey of Water, an interactive walk-thru exploration trail that unites the World Celebration and World Nature neighborhoods, is also moving forward with construction on the project now beginning to pick up speed.

We’ve also seen concept art for the Spaceship Earth overhaul leak online in recent weeks. The images, believed to be from 2018 or 2019, show an updated show sequence during the ride’s descent. This project was to begin in mid-2020 but was shelved when the pandemic hit. Unlike many of the other Epcot additions, the Spaceship Earth overhaul is needed as the current ride system, now decades old, is thought to require significant updates. Once finished, the unload station for Spaceship Earth will have a visual and thematic connection to the Walt Disney statue and World Celebration.

In the World Discovery neighborhood, the Play Pavilion still looks to be paused. This indoor pavilion will be located in the long-closed Wonders of Life building with no significant updates to its outside. The uncertainty of the Play Pavilion may correspond with the pause of the Festival Center, as the Play Pavilion building has hosted Epcot’s many festivals since Wonders of Life closed. There are also rumors that the hands-on attractions designed for the pavilion may now require a reworking to better meet the increased hygiene standards of today’s consumers.

An overhaul to the Imagination pavilion was expected once the Play Pavilion opened, though that too is now in doubt. Rumors of a new World Showcase pavilion have also been mostly silent since the start of the pandemic, as have rumors of a hotel for Epcot's entrance plaza. Finally, the kid-friendly Phineas and Ferb-themed World Showcase scavenger hunt attraction is expected to return with a new Ducktales update sometime later this year. That debut may correspond with the upcoming rollout of MagicBand+ that will occur later this year.

Chapek’s optimism on the company reviving the Mary Poppins attraction may be indicative of the new chapter the park is entering, one with fewer high-profile projects but with smaller additions that help round out Epcot’s offerings. No details on when these projects may begin moving forward or expected timelines of when they will open have yet to be shared by Disney. 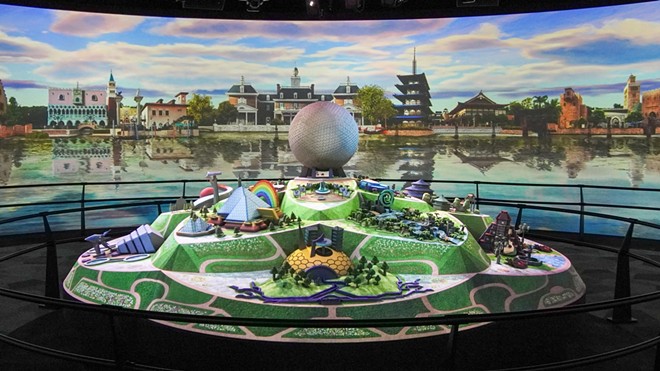 Image via Bioreconstruct | Twitter
This model, used to announce the Epcot overhaul, is currently on view at the Epcot Preview Center. It includes many references to projects now under development and hints at future projects for the Imagination Pavilion.