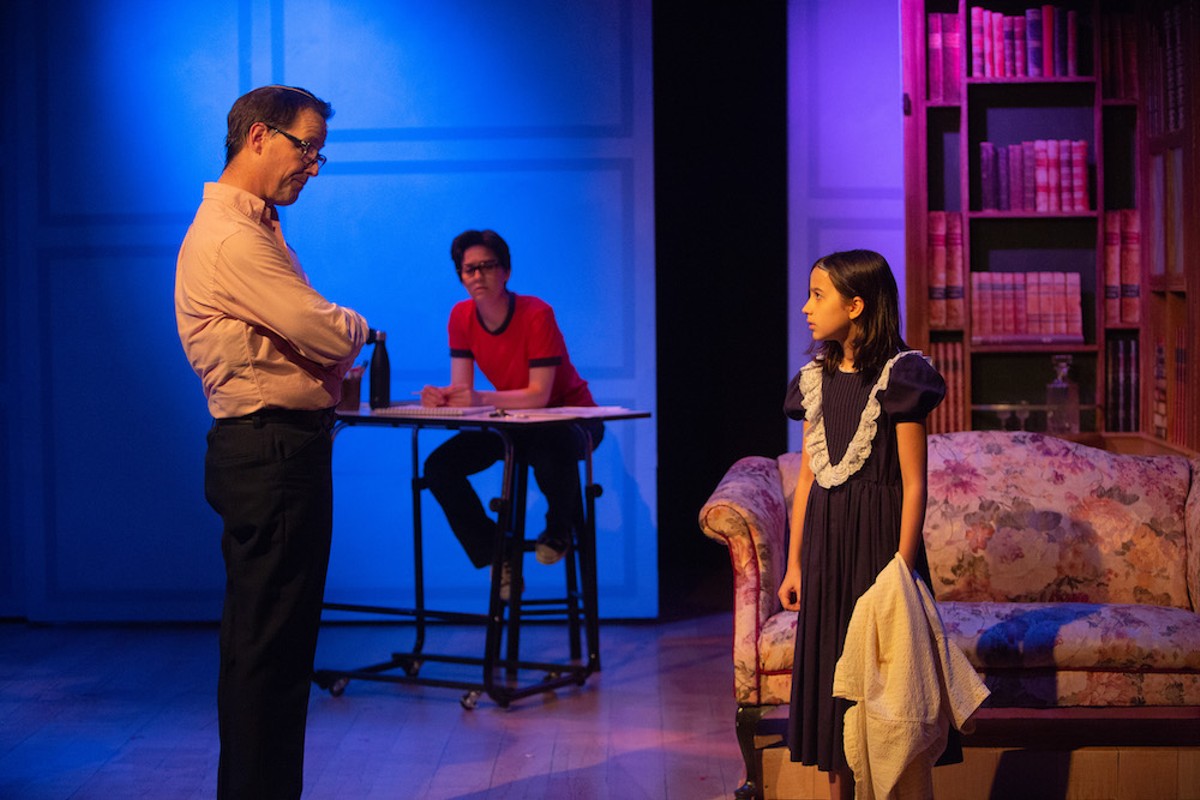 It's been almost two years since the Pulse Nightclub shooting and the outpouring of support from around the globe it triggered. For me, the most moving display of solidarity was when the Tony-winning cast and crew of Fun Home performed a one-night-only concert at the Dr. Phillips Center, raising $113,000 for the benefit of Equality Florida. I knew almost nothing about Fun Home before that night, but I instantly fell in love with Jeanine Tesori's memorable music and Lisa Kron's literate lyrics, and the cast album quickly landed a prime slot in my iTunes rotation.

For two years, I've regretted not seeing the New York production and cursed its national tour's failure to come here. But now Mad Cow Theatre has provided the next best thing with a moving production of Fun Home whose first-rate cast made me bawl just as hard as their Broadway predecessors. Sonia Roman plays Alison Bechdel, the lesbian cartoonist on whose autobiographical graphic novel the musical is based. In this fractured memory play, adult Alison sits at a drawing table, sketching scenes of herself as a small child (Raina Grabowski) and college student (Emilie Scheetz) as she attempts to understand the links between her own sexual liberation and the suicide of her father (David Lowe), a closeted funeral home director and bipolar control freak.

Fun Home is full of intimate details – from the ghoulish glee with which young Alison and her siblings play inside coffins to her father's self-destructive obsession with underage boys – that are unique to Bechdel's unconventional upbringing. But as director Mark Edward Smith remarked during the opening weekend post-show talkback, "The themes are universal in terms of parents and children. ... That to me is the joy of the show: It finds a commonality between all of us in the constant striving to make a connection." Under Smith's sensitive direction, that striving is evident in the subtle way characters interact – or don't – as Alison's time-frames intersect, culminating in Lowe and Roman's wrenching anti-duet, "Telephone Wire," which will make even the most hardened alt-weekly theater critic weep.

But while the adults may do the heavy lifting during the emotional climax, 13-year-old Avalon Middle School student Grabowski emerges as the standout star of this talented troupe. Her effortlessly honest performance, which peaks with an adorably awkward rendition of "Ring of Keys," is a reminder of how unnatural most other child actors are.

"It's been really fun getting to know everyone in the cast, and taking everyone seriously, especially with the content of this show," said Grabowski, to which Smith added, "We tend to underestimate young folks these days, but I think [the children] were probably the most mature people in the cast."

Grabowski's synchronicity with Scheetz and Roman is what keeps the audience grounded through the chronological leapfrogging, and while the Alisons aren't exact physical matches for each other (neither were the New York performers), this trio has observed each other closely enough to be convincing as a single character.

"For the show, I watch everyone, so it was the same in rehearsal, and I got to watch Medium and Young Alison and their mannerisms and try to incorporate them into my own to make us a unit," Roman says. "It's a lot of thinking, a lot of emotions, but going through it with these two extremely talented individuals is just a great journey."

Though easily my favorite Mad Cow production in many years, Fun Home isn't without a few flaws. For one, it is a bit curious that a play about the Bechdel Test's namesake barely passes it, due to underdeveloped secondary female characters. As Alison's long-suffering mother Helen, the masterful Laura Hodos mostly has to bite her tongue until finally she vomits up her feelings and vanishes before the climax, and Jolie Hart's vocal talents are underutilized as Alison's first girlfriend. Rob Wolin's puzzle-box set is clever but sometimes takes too long to unfold for the next scene (a simpler stage with cartoon projections would have been cleaner), and while music director Robby Stamper sounds superb during the score's keyboard-centric numbers, rock songs like "Come to the Fun Home" and "Raincoat of Love" suffer without a guitarist in the three-person pit.

Those nitpicks are ultimately irrelevant weighed against the heart and humanity that suffuses Mad Cow's Fun Home. On opening night, Broadway star Michael Cerveris sent a supportive message to the cast via Facebook, calling their Orlando benefit "one of the most meaningful performances we ever did." Judging by the scarcity of dry eyes around me in the audience, I'd wage these actors will someday be saying the same of this show.