Image via Andretti Karting | Facebook
After nearly a year and half, the much-anticipated Andretti Indoor Karting & Games has officially opened on Universal Boulevard in the heart of the I-Drive tourist corridor.

Located at the intersection of Convention Way and Universal Boulevard the 150,000 square feet family entertainment complex is one of the investments yet on still mostly undeveloped Universal Boulevard. The property backs up to the acreage owned by Universal Orlando where the rumored new theme park is slated to be going. The massive Andretti building is hard to miss amongst the cow fields and large retention ponds. The road has mostly seen investments from Rosen and apartment complexes or I-Drive developments, like I-Drive 360, that back up to Universal .

Sharing a parking lot with the yet to open TopGolf Orlando, the new Andretti attraction is designed as both a draw for families and convention goers. With two full-service bars and a sit-down restaurant that features made-from-scratch American entrees, the attraction will surely be a hit. One of the bars features over 100 HD TVs and large skylights that are outlined with LED lights. 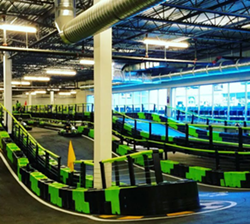 Image via Andretti Karting | Instagram
Of course, the primary attraction at Andretti’s is the three go-kart tracks. One track is designed for younger drivers, with a second having a more traditional feel with long straightaways and banked turns, but the third track will likely the be the most popular. This multi-level track has 15 turns and looks like something from Fun Spot but here it’s indoors. One of the turns features large floor to ceiling windows that look out at the intersection with the Convention Center visible just across the street. The three tracks can be combined into one “Super Track” that is the largest indoor karting track in the nation. High-speed electric SODI RTX Superkarts are used so there are no worries of the loud noises or fumes that most karting attractions have. The electric karts also allow for safety features such as remote monitoring and speed control. Solar panels on the roof help power the electric karts.

The family entertainment center might be focused on kart racing but there’s plenty of other things to do there. A SkyTrail ropes course has two different trails, one for beginners and one more advanced trail. It’s also the first in the state to feature SkyTrail’s curved zipline.

Image via Andretti
A two-level laser tag arena themed to an Indy car engine uses a Strike Force system that allows for multiple game options including numerous ones designed for team building. 12 boutique bowling lanes keep the racing theme and have four 150-inch screens above them. Six professional grade racing simulators feature both VR headsets and large screens that show off all the action. An exclusivity agreement means that Andretti Indoor Karting is the only commercial application of the CXC Motion Pro II simulators in the nation.

A massive arcade with over 100 games and an interactive 7D Theater, similar to the one found in the Terminal Building at I-Drive 360, round out the attractions at Andretti.

10,000 square feet of meeting space show what the focus here is. The entire facility is designed to be able to host multiple groups at the same time or it can be rented as a whole. Nearly every aspect of the facility can be used as a team building experience.

All the attractions keep the Andretti racing theme and various décor items throughout the facility help push that theme to the next level, including a Michael Andretti race car in the lobby. The entire place feels like a mix between the former Race Rock restaurant and an indoor Fun Spot but with a noticeable higher-end feel.

The $32 million facility is the third, and largest, indoor karting facility for the company, who also owns an Andretti branded outdoor thrill park in Melbourne, Florida. The two other locations are both in the metro Atlanta area. Numerous locations are in the works including at least two in Texas and multiple sites in Florida.

The Orlando TopGolf should open within the next few months.