CHRISTMAS IN THE PARK The holiday season isn't truly underway until Winter Park's Charles Hosmer Morse Museum of American Art hosts its traditional yuletide celebration in neighboring Central Park, complete with music by the 150-member Bach Festival Choir and the lighting of exquisite Tiffany leaded-glass windows from the museum's own collection. Speaking of which, ever wonder where the gorgeous windows shown off on the night come from? Well, one of them – the circa-1902 "Christmas Eve" – was designed by Thomas Nast Jr., whose dad was a famous political cartoonist for Harper's Weekly. But the other seven windows were rescued from the chapel of New York's Association for the Relief of Respectable Aged Indigent Females. Seems the ARRAIF was a 19th-century concern dedicated to providing a "genteel private charity for elderly, indigent women." On Christmas Eve, we hear, their spirits return to haunt the Red Hat Ladies. (6:15 p.m. at Central Park, Winter Park; rain date 6:15 p.m. Friday; free; 407-645-5311) 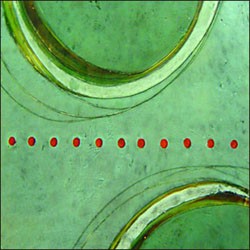 PAUL HORAN It really can happen: a local artist born of the excellent art mentors at Valencia Community College continuing to progress, both in skill and notoriety. We love Paul Horan's paintings, especially because he works in the medium called "encaustic" (that means he paints with wax). Following a centuries-old tradition, he drips, irons and presses together mostly pastel-shaded abstracts that have a look that's at once old and new. Horan has scored an exhibition of new works at Russell Alexander Fine Art in Winter Park that opens on World AIDS Day (also being shown: new work by Tiphanie Windsor). Being a compassionate and socially aware individual, he will give one of his paintings away – value $3,800; his stuff isn't cheap – in a drawing (tickets $25) that will benefit the Elton John AIDS Foundation. (reception 6 p.m. at Russell Alexander Fine Art, Winter Park; free; 407-622-7232)

TRIALS TO VICTORY In the coming year, the First Baptist Church of Leesburg intends to play host to 10 to 15 families left homeless by Hurricane Katrina. We're not just talking lodging, but a full sponsorship package that includes transportation, employment and school placement. To pay for it all, a trio of actors/models has worked up Trials to Victory, a fund-raising program of serious and comedic theatrics spiced up with a side order of motivational speech. Though performers Julia Denton Francis and Jane Park are unknown quantities – at least to us – third player Andy Dooley is anything but: He's brought his lighthearted self-actualization act to the last few Orlando International Fringe Festivals. All the while he was preaching the virtues of a positive mental attitude, little did he know that Katrina was waiting in the wings to put his ideology to the test. (7 p.m. at Central Florida Performing Arts Center, Sanford; also 2 p.m. Sunday; $12; 407-657-7520; andydooley.com)

ADAM NEHR Never forget that in Orange County, while there's a pale conservative face, the vibrant body of the population is liberal. So it makes us proud to see Orlando Museum of Art hosting an exhibit of black-and-white photography by Adam Nehr, who was chosen as the museum's Florida Artist of the Month. Nehr's biography isn't of the typical starving-artist variety; the Florida native is officially employed as a photographic instrumentation specialist at Kennedy Space Center, and he lives in Orlando. His creative niche is staging photographs in his studio that make a striking statement about controversial social issues, such that viewers – whether they agree or not with his point of view – will be stimulated to question things they typically take for granted. Currently, he says, the topics that most concern him are: 1) the boundaries of religion and government, 2) the government's overreaction to terrorism, which he feels is headed down a self-destructive course, and 3) the use of religious and social values to define hatred for certain people. There will be four photos at Nehr's opening reception that won't be allowed to remain on display with the other 28 images through the end of the month. The curious might just want to see what the museum considers too much for us to handle. (1 p.m.-3 p.m. at Orlando Museum of Art; free; 407-896-4231)

CHRIS BROKAW Yeah, he's opening for American Analog Set later in the evening at The Social, but you'd be remiss if you failed to catch him twice. (Plus, in-store performances always have that weird, lights-on, where's-the-beer vibe.) Brokaw is a man with some schizophrenic musical demons that push and pull him between pummeling blues, somnolent rock, abstract folk and all sorts of other interesting permutations. He'll be rocking it solo at this in-store, so who knows what to expect? (call for time; Park Ave CDs; free; 407-629-5293)

JAMES BLUNT If you were wondering how Linda Perry wound up having a record released on Kill Rock Stars, James Blunt might be the first step in answering your question. Not that Blunt has an in with Slim Moon, but the creepily perfect/perfectly creepy vibe that Perry's songwriting possesses (and is in evidence on the 1995 LP that KRS just reissued) is likely the same thing that attracted her to Blunt. You see, Blunt is, by definition, an average singer/songwriter. Just look at him. He's exactly the type you'd expect to see hoisting an acoustic guitar and singing songs about his life. Thing is, his life has been pretty weird – a stint in the Australian army, a very late musical "awakening" – and the album he just released (thanks to Perry) reminds us a lot of early Beck, without the self-conscious cut-and-paste and with an added dose of nonironic abstraction. Perhaps this is further proof that it's not a wise idea to judge people like Blunt by what stereotype they most easily fit into. As for Perry, well, we guess we'll give her the benefit of the doubt as well. (with Jason Mraz, Tristan Prettyman; 6 p.m. at House of Blues; $25-$28; 407-934-2583)

AMERICAN ANALOG SET Ever been dumped, with your girlfriend or boyfriend offering something to the effect of, "Look, I just don't think it's really working out right now, and I need some time to grow and try different things, but I still dig you and maybe at some point down the road we can have something together again …"? That's kinda what the long-running post-rock outfit American Analog Set is saying with this, its final-ever national tour. Indeed, the last track on Set Free, AmAnSet's recently released, very excellent sixth album, is called "Fuck This … I'm Leaving," but the situation isn't quite that dramatic; as frontman Andrew Kenny explains on the band's website, "This is the last time we will get into a van in August and get out of the van in December," though he won't shut the door on future one-off gigs in either New York City (where he currently resides) or Austin, Texas (where you can find the rest of the band). We don't really have any hard feelings – after all, Kenny's been trying to wrap up his Ph.D. in biochemistry at Columbia University for the past several years (he's been repeatedly dropping out of the program to make records and go on tour), and who are we to demand that he pass up a lucrative career cloning llamas or genetically altering kumquats in order to keep living the indie-rock dream? Besides, the bird flu is coming and we need all hands on deck to come up with a vaccine. Bottom line is this: If you want to experience the droney guitars, Krautrock beats, vintage organ thrum and wispy vocals that go into the AmAnSet formula – which falls somewhere between slowcore and Stereolab – one last time in a live setting, here's your chance. Consider it breakup sex. And don't take it too personally – it's not you, it's them. (with Chris Brokaw; 8 p.m. at The Social; $10; 407-246-1419)

ONE ELEVEN RECORDS "ROCKTOPUS" TOUR The best way, in our opinion, to establish a national identity for your punk rock label is to take it to the kids. Sure, you can put up all the MySpace pages you want, but in today's crowded punk/indie landscape you gotta give kids a reason to buy every single record your label puts out, and rocking their balls off with a tour is just the way to do it. Orlando-based One Eleven Records has figured this out, and their label-centric tour has been marvelously successful so far. This date is one of the last for this year, and will feature Mashlin, Thin Dark Line (who just released their One Eleven debut) and Rookie of the Year. (5:30 p.m. at The Social; $8; 407-246-1419)