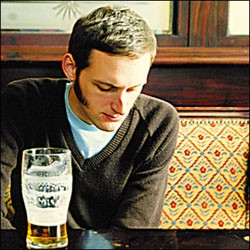 ALASDAIR ROBERTS In the mid -'90s, Alasdair Roberts recorded and released some records under the name Appendix Out. They were sort of folky, sort of weird and fairly accessible. Yet, once he began releasing records under his own name, the truly weird and truly folky undercurrents of Appendix Out came to the fore. Bridging the gap between the warped loneliness of Will Oldham and the emergence of the new breed of warped psych-folksters, Roberts' solo material is thoroughly unique and, honestly, a bit out of sorts with both ends of that spectrum. He's clearly devoted to a highly individual interpretation of British folk music, but he's also clearly nuts. Thus, his music is thick with personality, but not at all personal. And that's the kind of folk music we love. (with Magnolia Electric Co., Papercranes, Producto; 8 p.m. at The Social; 407-246-1419; $10)

HALLOWEEN HORROR NIGHTS Doing its part to keep Orlando's Halloween celebrants from choking on family-friendly pabulum, Universal Studios again gets set to fill their systems with chainsaw exhaust and dry ice. This weekend marks the launch of the resort complex's 15th annual extravaganza of assaultive after-hours entertainment, an invitation for the morbidly curious to wander through seven new haunted houses and partake of naughty extras like the ever-popular, ever-transgressive "Bill & Ted's Excellent Halloween Adventure" show. Cast members we've talked to seem enthusiastic about this year's "Tales of Terror" motif – think evil bedtime stories – which they're hopeful will bring cohesion to an event that has occasionally come off a bit slapdash in conception and/or execution. And when a guy with a chainsaw gets enthusiastic, it's time to sit up and take notice. (6:30 p.m. at Universal Studios Islands of Adventure; through Oct. 31; 1-877-717-3318; themeparks.universalstudios.com/orlando/hhn; $52.75, $59.75)

PARTY FOR THE SENSES Also opening at 6:30 p.m. (but at the attraction down the road from Universal) is the weekly drink & dine event added to the 10th annual Epcot International Food and Wine Festival. The Party of the Senses condenses the festival experience into a one-evening affair at the World Showcase. Wines will be poured aplenty, along with champagne and beer. A couple dozen guest chefs and Disney chefs will do the cooking. Throughout the evening Cirque du Soleil entertains in that strangely wonderful way they do – "Aerial Ballet in Silk, Aerial Ring, Tightrope Walking, Hand Balancing, German Wheel, and Diabolos" – topped by a vocal turn by Sisaundra Lewis (a former La Nouba singer, herself). The traditional Epcot festival and all of its activities opens this day as well and continues through Nov. 13. (6:30 p.m. at World Showplace, Epcot, also Oct. 8, 15, 22, 30, Nov. 5 and 12; 407-939-3378; www.disneyworld.com/foodandwine; $95)

ORLANDO FIRE MUSEUM When visiting the Orlando-UCF Shakespeare Festival, walk straight through the lobby and head outside onto the patio and you can't miss seeing the tiny two-story, red-brick Orlando Fire Museum. It's been closed since 2001 when the Historical Society of Central Florida made its move out of Loch Haven Park to downtown Heritage Square (though it wasn't called that then) and changed into Orange County Regional History Center. Renovations have finally been completed and the museum – built in 1926 in College Park and moved here in 1978 – will be open daily to curiosity seekers. The tickets aren't cheap for this mature history lesson, and there's not much to climb on or clang – so leave those active people with behavior issues at home. (10 a.m.-5 p.m. Monday-Saturday, noon-5 p.m. Sunday at Orlando Fire Museum, 814 E. Rollins Ave.; 407-898-3138; $3.50-$7)

DISCONNECTED SYNAPSES Subtitled "an exhibition of visual misfires," Keith Theriot's latest art exhibit reinforces new paintings of some of his deceased friends with earlier works that put their lives and memories in greater context. It's typically provocative terrain for Theriot, an HIV-positive artist who once presented an exhibit of images painted in his own blood. But Disconnected Synapses isn't expressly personal, having found its inspiration in the public reaction to terrorist attacks and other high-profile disasters. The psychology of calamity is something Theriot is eminently qualified to comment on: At various times, he has lived and worked in both New York and the French Quarter of New Orleans. (reception 7 p.m.-9 p.m. at Gallery [email protected] Center; through Oct. 28; 407-228-8272; free)

SARAH CHANG The word "prodigy" has been attached to Sarah Chang's name for so long that one could be forgiven for not noticing that it's been replaced with "virtuoso." By its very nature, the world of classical musicians is one that begins young, so that anyone is still surprised by the likes of a Hillary Hahn or Sarah Chang is far more uncommon than the presence of such young players. Regardless, Chang's skill on the violin is breathtaking, and Orlando Philharmonic Orchestra is definitely to be commended for getting her for their season opener and allowing her to lead the Phil through a Dvorak violin concerto. It'll be thrilling. (8:30 p.m. at Carr Performing Arts Centre; 407-770-0071; $12-$45)

CENTRAL FLORIDA VEG FEST 2005 There are a few occasions when vegetarians can feel at a loss. One of them is when an outdoor festival is in full swing and the smell of fried foods hangs in the air, full of temptation, but there's nothing healthy to eat. Here's a chance to wander from booth to booth, bolstered by treats from but hardly limited to Whole Foods Market, Soy Moon Gourmet Soy Cheese, Vigoa Cuisine, Galaxy Nutritional Foods, Vegan Xpress, The Healthy Chef, Planet V, Sah Nevaeh, Infusion Tea and Little Italy. Just bring some money and a sense of adventure. At the booths, there will be animal adoptions, lots of petitions to sign, and plenty of food for the soul in the form of lectures, workshops and demonstrations. Pets are welcome, and when the fest winds down, the Walk for Farm Animals! Protest (www.walkforfarmanimals.org) begins. (11 a.m.-5 p.m. at Lake Lily, Maitland; www.orlandovegfest.com; free)