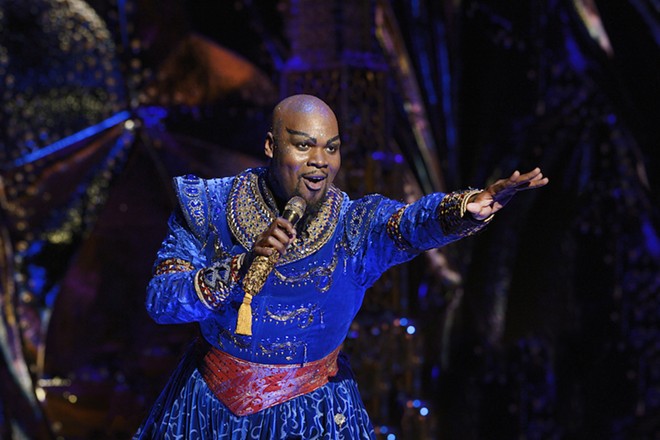 A generation ago, Disney released a string of four iconic films that ignited a second Golden Age of hand-drawn animation, providing the Mouse House with decades of fodder for theme parks and live-action remakes. This quartet of classic cartoons likewise launched the transformation of Times Square into Walt Disney World’s New York outpost, as each movie was made into a Broadway musical and landed on the Great White Way with varying degrees of success. The Lion King is still the peerless pride of Mickey’s musical menagerie, thanks to director Julie Taymor’s distinctive puppet-driven vision, while The Little Mermaid floundered both in Manhattan and on the road. Beauty and the Beast, which kicked off Disney’s theatrical dynasty, sits somewhere in between, a beloved Broadway rose that’s sadly wilted after a decade of non-Equity tours.

There’s something extra special between the romantic leads of 'Aladdin,' currently at the Dr. Phillips Center

Now, Orlando has the opportunity to experience the final member of this famous foursome, as Disney Aladdin: The Hit Broadway Musical takes over the Dr. Phillips Center for an extended run. Directed and choreographed by Tony nominee Casey Nicholaw, Aladdin brings the old-fashioned showmanship of Hope & Crosby and Cab Calloway back to the boards with a crowd-pleasing show stuffed with energy and humor. However, at least for this longtime follower of Aladdin’s earlier incarnations, some subtle but significant issues of balance and tone place this interpretation squarely in the middle of Disney’s catalogue. 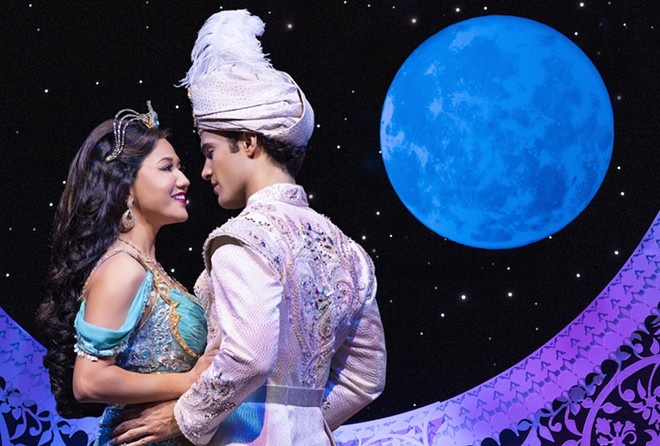 Since it’s illegal to live in Central Florida without being fluent in the history of Agrabah, I’ll skip the synopsis and go straight to the good news: This show boasts a terrific trio of leading performers, starting with Jonah Ho’okano as the titular street thief. Boyishly handsome with a bright singing voice, Ho’okano generates instant chemistry with the luminous Keanaonālani Kekoa’s sharp-witted Princess Jasmine; see my Live Active Cultures interview with the pair to learn about their long history performing together. Orlando native Michael James Scott is electric as the Genie, reprising the role he played on Broadway; he milks his adoring hometown audience with the sinuous ease of an Apollo emcee, inhabiting a hilariously hyperverbal character that’s fabulously distinct from Robin Williams’ iconic interpretation.

Aladdin also boasts a bounty of supporting cast members, who overflow the stage with eye candy – both artistic and anatomical – from the opening curtain to closing bow. Although the cast of thousands (OK, dozens) enhances the production’s sense of scale, the core story starts getting lost in the crowd. On the plus side, Aladdin and Jasmine now each get to sing an additional “I want” song in Act One, which helps better define their characters. His is a lost song penned for the original film by late lyricist Howard Ashman, and is a real gem; hers is one of several unmemorable new tunes from composer Alan Menken and book writer Chad Beguelin.

Unfortunately, the romance that should be the focus gets little time to breathe, because instead of restricting the pop-culture anachronisms to the Genie, the script squeezes self-aware schtick into nearly every scene. Instead of an adorable mute monkey, Aladdin is saddled with a trio of incessantly yammering sidekicks (Zach Bencal, Ben Chavez, Colt Prettes) inspired by a subplot that was wisely deleted from the movie. The villainous Jafar (Jonathan Weir) and his hirsute henchman, Iago (Reggie DeLeon), have several long scenes of campy dialogue which does little but dull their threat as antagonists. 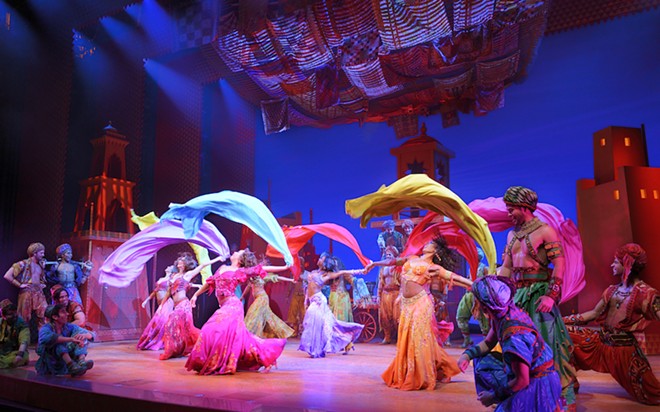 That imbalance bleeds over into other aspects of the show’s design. The dance numbers are executed with plenty of pep (if not precision in arm placement) but seem choreographically inspired as much by Bollywood and Fiddler on the Roof as anything distinctly Arabic. Likewise, Bob Crowley’s set designs feel inconsistent in scale, ranging from an opulently gilded Cave of Wonders to a sparse scenic drop depicting the Sultan’s palace. The wonky forced perspective of the marketplace props makes an early chase scene look particularly clumsy, and the cartoonish color schemes sometimes veer into tackiness when set against Gregg Barnes’s sequin-spangled costumes.

“Theme park show” is often used as an insult, but I’d probably feel less meh about this Aladdin if I hadn’t already experienced the exceptional stage version that used to run in Anaheim’s Disney California Adventure, and continues to play on the cruise ships. Despite running under an hour, that production’s pacing felt less rushed than this one’s, and while the tour’s famous flying carpet boasts virtually invisible wires, it doesn’t wow audiences with an overhead flyby like its predecessor. Ultimately, this take on Aladdin provides perfectly competent – and occasionally magical – evening of entertainment, but falls short of improving on its source material.

If you do want to take a “Friend Like Me” to visit “A Whole New World,” good seats are still available for a number of remaining dates, including Jan. 29-31, and Feb. 4-9. Visit drphillipscenter.org for tickets and information.