Ahead of next year's Sesame Street land, SeaWorld announces seven new rides for its Orlando parks 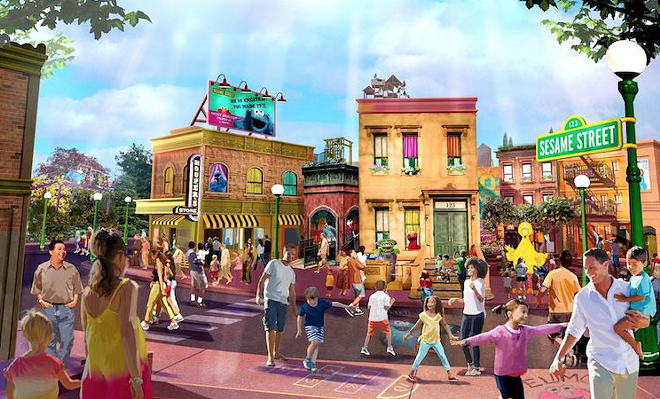 Photo via SeaWorld
Sesame Street at SeaWorld Orlando
As SeaWorld Orlando hosted the grand opening of Infinity Falls, their long-delayed new river rapids ride, they used the occasion to point ahead to even more new things heading to their Orlando parks in 2019.

Park officials finally confirmed new details regarding the much-anticipated Sesame Street at SeaWorld Orlando area. As reported on here in February, the new land will see numerous rides in the current Shamu’s Happy Harbor area being re-themed, but keeping their current ride systems. 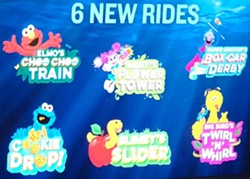 While they did not confirm what each ride will be, it’s likely that Super Grover’s Box Car Derby will be the updated Shamu Express family coaster, Abby’s Flower Tower will replace swing tower, currently known as Jazzy Jellies, and the Flying Fiddler kiddie drop tower will be re-themed as the Cookie Drop. Elmo’s Choo Choo Train looks to be an updated train ride with a track that is longer than the previous Shamu’s Happy Harbor train. That train ride, which was moved to the entrance of Wild Arctic ahead of the Sesame Street construction, will likely be retired. Swishie Fishies may be updated as Big Bird’s Twirl ‘n’ Whirl, but that is less clear. The permit filed in February show a ride on the pad where the always photogenic Sea Carousel is located, but it's unclear if the park’s iconic carousel will be moved or remodeled. 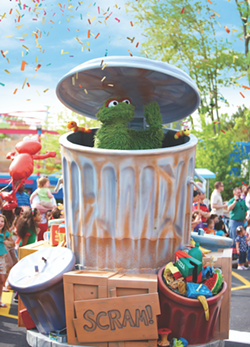 Photo via SeaWorld
A parade, the first for the park, and multiple meet-and-greets within the Sesame Street area were also re-confirmed by park leadership. The parade will likely be similar to the popular Sesame Street parade that SeaWorld San Antonio hosts. One rumored aspect that was not mentioned is the dark ride. At the moment, it's unclear if this once rumored ride was postponed, canceled, or never actually part of the plans.

2019 will also see an expansion of both the Seven Seas Food and Wine Festival and the Electric Ocean summer event. New festivals such as the SeaWorld Craft Beer Festival, which debuts next month, are also being tested at the park with the park hosting a special event nearly every weekend in 2019.

Image via Orlando Park Stop | Twitter
Next door at Aquatica, a new ride called KareKare Curl was also confirmed. Opening this upcoming spring, KareKare Curl is similar to the Colossal Curl ride found at both Water County, in Virginia and Adventure Island in Tampa.

SeaWorld Parks has seen positive reviews of both of those rides since they opened in 2014 and 2015. Details such as the height, color scheme, or ride length for KareKare Curl weren't shared, but Colossal Curl in Tampa is 70-feet tall. SeaWorld filed permits for a new attraction at Aquatica back in late July but waited until this month to share details on what they were planning.

All of these announcements come as SeaWorld drops the prices of annual passes in an attempt to capture even more locals. Annual passes for Florida residents now begin at $9.99 per month.

This attempt to draw in locals, which former CEO Joel Manby began in 2016, has proven successful so far for the struggling theme park chain. After Manby stepped down earlier this year, interim CEO John T. Reilly doubled down on the plans and announced new details on how the company plans to add significant new attractions to every park every single year for the foreseeable future.

Recently, internal documents that were recently leaked confirm the chain’s interest in adding new roller coasters to most of their parks by the end of 2020. New animal encounters, events, and upcharge activities are also being added to the company’s parks as they attempt to shift away from an animal show-based park and into more of a ride-based edutainment style park.

Despite delays with Infinity Falls, which pushed the opening of the attraction back by months causing it to miss the critical summer crowds, the company is still reporting improving attendance numbers with record-breaking numbers expected next year, as well. With Aquatica adding two new slides in less than 18 months apart (after Ray Rush’s opening earlier this year) and with SeaWorld Orlando opening Sesame Street less than a year after Infinity Falls’ opening (even if it wasn’t technically planned that way), the SeaWorld Orlando resort is preparing for what might shape up to be the year they finally recover.