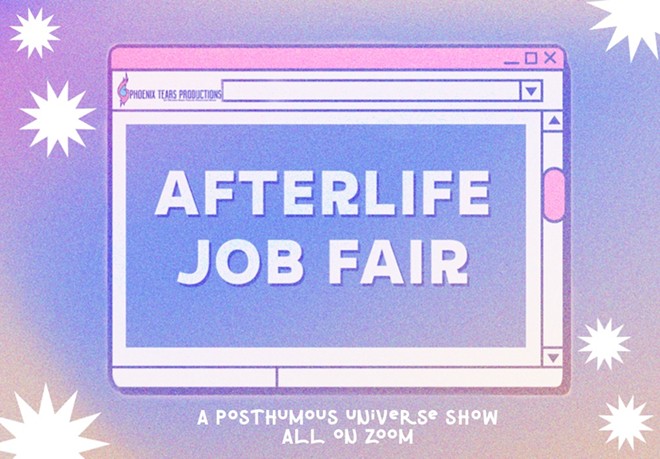 When you die, would you want to be uploaded to an artificial heaven promising perpetual paradise, instead of facing possible oblivion? If so, what kind of eternal reward would you pick, and who would you allow in? And would it change your mind if you knew your heavenly repose resulted in ecological disaster for those still living?

Those are some of the weighty questions prompted by Phoenix Tears’ thought-provoking interactive online experience Afterlife Job Fair, the latest installment in the Posthumous universe created by Megan Markham and Mallory Vance. What began as a COVID-era experiment in Zoom theater has — unlike most of its contemporaries — outlasted the pandemic precautions by exploiting technology to share a compelling story, and Afterlife is its most satisfying chapter so far.

You don’t need to have attended earlier incarnations like Recovery or Cold Case to participate in the Afterlife Job Fair (although there are Easter eggs for those who have) since pre-show reading materials will catch you up on sci-fi backstory. Basically, the digital afterlife technology invented by the Posthumous company — which has revolutionized death for those who can afford it, and sparked an energy crisis for everyone else — is now in the hands of competitors, who are holding an annual job fair to recruit new employees.

Each player can follow their own path, discovering different characters and puzzles by speaking with the actors and by sending and receiving messages through Zoom’s chat system. I sent a password to a chatbot, and found myself recruited into the anti-afterlife Naturalists by the gorilla-obsessed Eve Connor (Dani Leyhue). Eventually, I helped her stop fighting and form an alliance with one of the other representatives, which I thought was a good thing … until the shocking ending left me rethinking my decisions.

Afterlife Job Fair raises philosophical and ethical questions you could easily debate for days. However, this two-hour experience flies by because of its excellent actors, who ably walk a delicate tonal tightrope between dystopian drama and knee-slapping satire. The characters are all sharper, darker and funnier than ever before, and the cast manages not to break, even when improvising responses to absurd audience suggestions. If you haven’t plugged into the world of Posthumous previously, the Afterlife Job Fair is the perfect entry point to both brush up both your résumé and/or your obituary, and laugh without leaving your laptop.