Aerosmith, Get Him Eat Him, Launch 2006 and more

AEROSMITH/LENNY KRAVITZ The promotional materials for this show trumpet "Same stage, same night" as if it's some miracle of God that we could possibly be blessed with both Aerosmith '05 and an ironically more-past-his-prime Lenny Kravitz. With tickets starting at $56 (and topping out at $126), it's obvious that this is less a "miracle" than it is a highly unfortunate case of someone being able to convince Aerosmith that Lenny "Even Dumb Rock Kids Don't Like Me Anymore" Kravitz could somehow make the price seem like a deal rather than a donkey punch. Why, then, is this show a "Selection"? Well, stupid, we're talking about Aerosmith, the best washed-up band on the planet. You can hate on 'em all you want, you can mock their decision to tour with KISS, you can bemoan their awful schlock balladry and you can puzzle over Steven Tyler's face. But one thing you can't do is be nonplussed at how – even when they phone it in – they're 10 times the rock band their imitators are and, more importantly, far more vital than the rock band they most imitate (the Stones). We never miss the chance to see 'em when they come to town; not because they're "legends," just because they totally rock. (7:30 p.m. at TD Waterhouse Centre; $56-$126; 407-849-2020)

LAUNCH 2006 Once again, the theater year begins with a program of original short plays solicited and staged by Playwrights Roundtable – seven in all, and each in some way advancing the evening's theme, "The Ties That Bind." Subjects from pregnancy to jailhouse reunions provide narrative fodder for tried-and-true PRT scribes like John Goring and David McElroy; meanwhile, the fold expands to welcome new contributors Rob Anderson (founder of the production company Invictus T.C.) and Joseph Reed Hayes (author of Fringe Festival highlights A Little Crazy and Solos). According to producer/artistic director Chuck Dent – who also serves as the program's emcee – all seven 10-minute playlets were originally submitted for consideration in past editions of PRT's "Summer Shorts" extravaganza. But that doesn't mean we'll be watching some sad parade of artistic also-rans: Back then, the plays in question missed the cut by a few measly judging points. So consider this "Launch" more of a rescue mission than a post-Christmas inventory reduction. (8 p.m. at Theatre Downtown; also Friday and Saturday; $12-$15; 407-788-8468)

3D: EMERGING ARTISTS, CERAMICS AND SCULPTURE Keep in mind that the teachers at Crealdé School of Art in the Ceramics and Sculpture Fellowship Program include director Vincent Sansone and Sculpture Garden curator David Cumbie – artistic lights in their own right. But this open house is devoted to the creations of the dozen students who were specially selected for their tutelage. While you're visiting, don't miss the show that's also on display in the Community gallery. Overtown: Miami's Little Broadway is the Florida Humanities Council's traveling exhibit of photographs and posters from the Knight Beat restaurant, which help document the history of Miami's cultural center during the 1950s and '60s for African-Americans. (open house 11 a.m.-2 p.m. at Crealdé School of Art; exhibits continue through March 31; free; 407-671-1886)

REFLECTIONS FROM CHARLIE CALDWELL Subtitled "Paintings by Trent Tomengo Inspired by the Poetry of Dr. Stephen Caldwell Wright," this exhibit shows what happens when Tomengo – an artist and a humanities professor at Seminole Community College – momentarily restricts his focus to interpreting a single poem by a single writer. Themes of familial responsibility and citizenship run through 20 paintings Tomengo has based on Wright's poem "My Father's Name." The exhibit only stays up for a week, so it's your responsibility not to miss it. (through Jan. 18 at Seminole Community College Fine Arts Gallery; reception 5 p.m.-7 p.m. Jan. 12; free; 407-708-2040)

INFINITE ILLUSIONS, AMAZING LUBOK Auspiciously starting off the year with visual impact, the Albin Polasek Museum hosts two exhibitions by Russian artists. In the Aviary gallery, Infinite Illusions shows off an offbeat selection of works by the classically trained, St. Petersburg-schooled Joulia Vitaliy. Now a resident of Winter Park, the artist's extensive travels informed her influences, which are a blend of Russian and European. In the 1980s, she was part of an avant-garde theatrical group that was riding the edge of the Russian pop-art scene. On display here are carved frescoes, stucco pieces, dresses, a painting and a vase. In the East Gallery, Vladimir Fomin's paintings comprise Amazing Lubok – "lubok" being the catchall term for traditional Russian folk art, distinguished by bright colors and simple constitutions. Rollins professor Alexander Boguslawski lectures 7 p.m. Wednesday, Jan. 11, with Fomin traveling from Russian Karelia to be in attendance for his American debut. (through Feb. 26 at Albin Polasek Museum & Sculpture Gardens; $5; 407-647-6294)

JOSEPH AND THE AMAZING TECHNICOLOR DREAMCOAT We were positively beside ourselves when we heard that none other than Amy Adams was playing the role of the Narrator in the touring production of Dreamcoat to be brought into town by SunTrust Broadway in Orlando. Amy Adams, we marveled? The same little bundle of spitfire and dynamite who made the indie dramedy Junebug one of the high points of our moviegoing year? But then we read further, and learned that this Amy Adams is/was apparently some sort of contestant on American Idol. Oh, well. We're still going, anyway. Because Patrick Cassidy is starring, and we loved him on Dynasty. (8 p.m. at Bob Carr Performing Arts Centre; repeat performances Jan. 11-15; $34-$62; 407-849-2020) 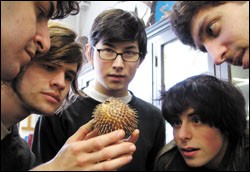 GET HIM EAT HIM Jesus, we're getting old. When we first heard this band's name, we actually said: "Kids these days." Or something similarly crotchety. No, we don't like the moniker this five-piece has chosen. Not because it's stupid (although it is), but simply because it's not in the least representative of what they sound like. We would have chosen something like Synthy Popboys or Catchy Fey and the Girly-Men. Perhaps the Saccharine Smartasses. Don't know, but even the very slight bit of aggression implied in their current name is utterly deceptive. This is a group that's all about the goofy happiness that comes with a vintage '80s keyboard, two-minute pop songs to play on it and a willingness to make it all sound kinda weird. (with Summerbirds in the Cellar, Dodger; 8 p.m. at The Social; $7; 407-246-1419)