COVID-19 precautions seemed equal or superior to their competitors 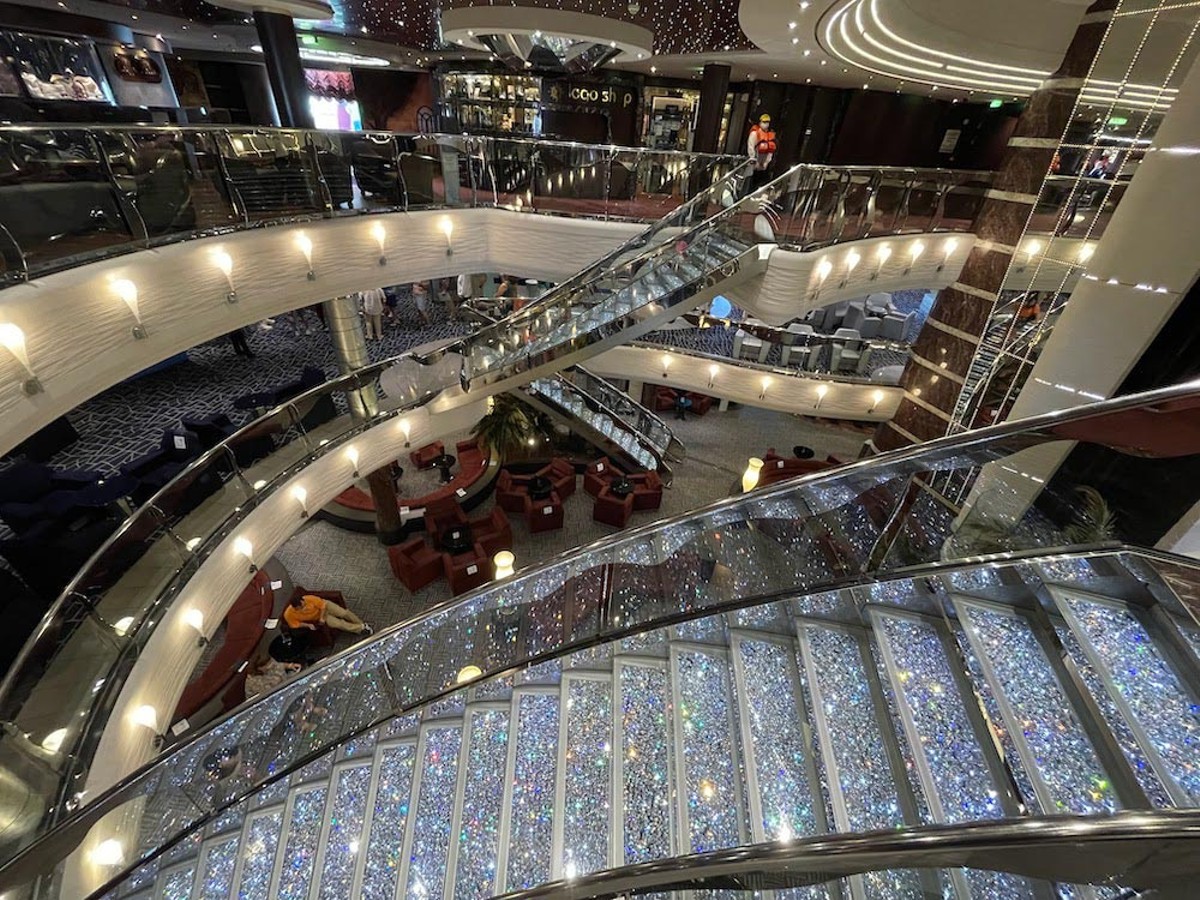 Over the top, all the way down. Photo by Seth Kubersky

After a surprisingly sluggish September, crowds at Orlando theme parks surged in October, and with the November reopening of America's borders to foreign visitors, the region's attractions are anticipating that holiday attendance will rival pre-COVID levels. But one significant segment of Central Florida's tourism economy has continued to lag behind: the cruise industry. Cruise ships were already regarded by many as floating petri dishes prior to the pandemic, and after the cruise lines' dispute with Gov. DeSantis, it isn't surprising that customers haven't yet returned en masse to Port Canaveral.

As someone who has done my best to observe sanitary social distancing despite traveling for a living, I can't say that my July tour of Carnival's new Mardi Gras made me eager to jump aboard for a week at sea. However, after attending the September launch of the MSC Divina, this Swiss/Italian-owned newcomer to the competitive Canaveral cruise market made me an offer I couldn't refuse, and earlier this month I discovered firsthand what it's like cruising in the age of coronavirus. [Full disclosure: MSC comped my fare, but I tipped the crew and covered certain extra charges.]

The world's fourth-largest cruise line, MSC started as a commercial shipping company and is well-known to European travelers. Although MSC has been operating ships out of Miami for many years, the brand only recently began offering Port Canaveral departures on the Divina, which will trade places in late November with the larger Meraviglia for winter sailings. Despite having less name recognition among Orlando-based cruisers than Disney or Royal Caribbean, I felt confident taking a chance on MSC because their COVID-19 precautions seemed equal or superior to their competitors, and far more comprehensive than any of the other Central Florida attractions I frequent.

For starters, all adult guests on MSC must provide not only proof of full vaccination before boarding, but also a negative COVID test taken within two days of departure. (I recommend the Abbott BinaxNOW, which you can administer from home via webcam in under 20 minutes.)

Once aboard, the handful of kids under 12 on our voyage were excluded from vaccinated-only areas, sanitizer dispensers were ubiquitous, temperatures were taken daily, and masking was consistently enforced everywhere except the pools and restaurants, making it the safest-feeling public space I've been in all year. (If only MSC were as health-conscious about the second-hand smoking drifting from the casino and outdoor bars.) Even the obligatory muster drill was reimagined as an in-cabin video presentation, which I greatly appreciated.

Speaking of cabins, I stayed in a ginormous Yacht Club balcony suite, which had a bathtub and walk-in closet and included perks that were both wonderfully indulgent and slightly awkward, such as a personal butler who will bring you breakfast in bed, walk you to meals at the exclusive restaurant and serve you cocktails before bedtime. Such luxurious pampering starts around $300 per person per night — significantly cheaper than similar concierge rooms on competing cruises — but you can book a budget cabin without all the extras for less than a third of that rate. Consider splitting the difference with an Aurea upgrade, which includes unlimited use of the superb spa facilities and private sundeck.

No matter which class you choose, you'll have access to eateries ranging from an entirely average buffet (thankfully plated by staff, with no self-service) to up-charge steak and sushi restaurants (the fish quality was phenomenal, but seasonings were far from authentic). Stick with the Italian and Mediterranean specialties, like fresh-made pastas, and you won't go hungry; and get a drink package if you plan to stay "hydrated," because a la carte cocktails can add up quickly.

In deference to the Bahamas' 31 percent vaccination rate, I opted not to disembark the ship in Nassau, but the two days we spent at Ocean Cay, MSC's private island, made the trip more than worthwhile. The company has been restoring the former sand mine's ecology since 2015, resulting in a carbon-friendly sea turtle sanctuary powered by solar panels and reverse-osmosis desalination. Ocean Cay lacks the kid-friendly activities of Disney's Castaway Cay and Royal Caribbean's CocoCay (though the lighthouse does do a nifty nighttime light show), but its lack of attractions is the attraction: stargazing on the pristine beach with virtually no light pollution made for one of the best cruise excursions I've ever experienced.

The same could probably be said of the entire MSC experience, as this isn't necessarily a great vacation for those who need non-stop entertainment. The Divina sports a single short water slide, a 4D ride that was missing at least one dimension and an exquisite theater whose nightly productions range from an engaging Paris-inspired variety show to a talent-packed but tone-deaf Tina Turner tribute featuring a white woman singing Anna Mae Bullock's biggest hits.

There's lots of live music in the socially distanced lounges, along with dance lessons and karaoke, but if you want energetic Carnival-style deck parties or continuous characters and crafting activities like Disney, look elsewhere.

And if you're dependent on technology, know that even the premium paid WiFi is pretty poor inside staterooms, while the tiny televisions offer little more than ESPN and shipboard advertisements.

On the other hand, adults seeking an escape from Orlando's pixie dust who can entertain themselves — reading a book beside the saltwater pool, relaxing in the Swarovski crystal-studded atrium or just watching the sunset with room-service prosciutto and Parmesan — can find great values on MSC over the coming months. Personally, I'm pricing my next sailing now, before word gets out and fares skyrocket as Central Florida's rebound continues.