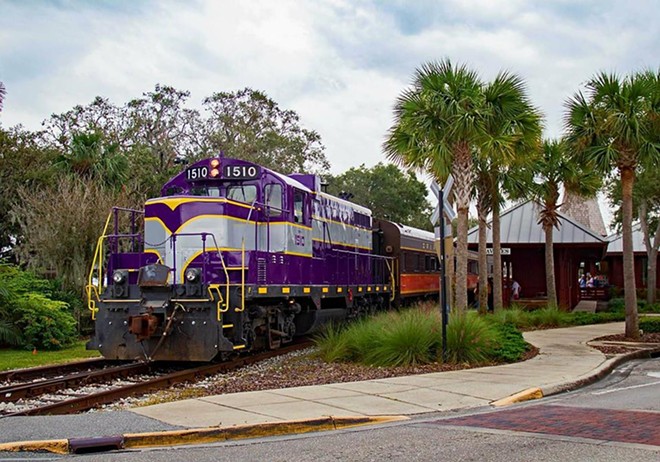 The two hour ride begins in Munchkinland, and includes live onboard entertainment from Dorothy, Scarecrow, Tin Man, and the Cowardly Lion, along with audio from the movie and a stage production in the Emerald City. Officially licensed from Warner Brothers, the train ride experience is an updated retelling of the classic story with authentic costumes and sets. 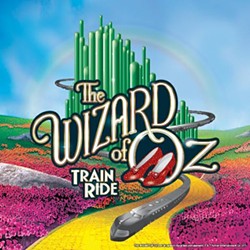 The Royal Palm Railway Experience
Rail Events Inc. announced The Wizard of Oz Train Ride last year. The company is known for its popular Polar Express train experiences and also offers a Halloween-themed Peanuts experience where riders can meet Snoopy and visit the Great Pumpkin Patch. Royal Palm Railway has confirmed that experience will be offered this fall in Tavares.

The city scrambled to find a new train operator, ultimately accepting a bid from Neil Bagaus, who had previously worked on the Orange Blossom Cannonball before leaving for a job in Chicago. It was Bagaus who oversaw operations of a tourist train in the city during the first three years of its operation as the operations manager.

Now hired by Orlando & Northwestern Railway as acting manager, spokesperson, and train conductor Bagaus was able to negotiate favorable terms with Florida Central Railroad, the City of Tavares, the City of Mount Dora, and, for the first time, the City of Eustis. With Eustis in the loop, the Royal Palm Railway Experience opened late last year as a hop-on, hop-off style train with a nearly two and half hour trip through the Golden Triangle area with stops in each of the downtowns.

Also unlike the Cannonball, the Royal Palm Railway passenger cars are all vintage mid-century Amtrak cars with air-conditioning and updated restrooms. Glass-enclosed dome coaches offer 360-degree views nearly two stories in the air while other dining cars are used for special events.

The Orange Blossom Cannonball was also a steam engine. Currently, there is a G campaign to have a nonprofit purchase and restore a historic steam engine in Texas. If that campaign is successful, and the engine is restored, an agreement is already in place to have The Orlando & Northwestern Railway use that steam engine here.

A big part of the business model for The Orlando & Northwestern Railway special events with the first being last year’s Polar Express train. Nearly 45,000 tickets were sold for the Christmas train experience, topping estimates of 40,000. City officials reported an increase in foot traffic in the downtown area and many local businesses reported record sales.

In February, The Royal Palm Railway Experience hosted an adult-focused Mardi Gras train experience that they designed themselves. The Rails and Ales Brew Train, . Patrick’s Day themed train ride that included two beer flights, took place this past weekend. A Cinco de Mayo train ride is planned for May.

The Wizard of Oz Train Ride, The Great Pumpkin Patch Express, and The Polar Express (all from Rail Events Inc.) have already been confirmed for this year with more special train events planned for the near future. Rail Events Inc. also offers three other Peanuts-themed train experiences that may be coming in future years to Tavares, including a Valentine and Easter themed experience.

The Golden Triangle Route, the hop-on, hop-off train, runs Wednesdays through Sundays. A special dinner train operates on Saturdays.
Tickets for the Wizard of Oz Train Ride are on sale now with many dates expected to sell out. Riders are encouraged to wear The Wizard of Oz themed attire and costumes are permitted.