Morgan Steele
I didn’t know Morgan Steele in that IRL sort of way. Normally, I draw a line there. But with an essence so uncontainable, permeant and sui generis, he was an exception.

Unlike the vague composites we have of our further acquaintances, Morgan was a blazingly detailed figure. He was as much local color as he was a local artist, far more than almost anyone else can claim. Even in the most fleeting and trivial interactions such as online comments, he flashed glimpses into his soul. And they were always vivid, candid and electric. As Facebook friends and followers of each other’s work, we technically knew who each other were more than actually knew each other. But that seeming barrier was heeded far more by me than him – and my world, this world, was brighter for it.

He and I seldom inhabited the same place simultaneously. And if we did, we didn’t exchange face to face. But Morgan, thankfully, was the one who bridged that gap.

There was that one time in June of 2008, for example, when I received a mailed package from him at the Orlando Weekly offices. Inside was a personal note and a souvenir from a Monotonix show (a broken, duct-taped drumstick). There was also a rough black-and-white Xexox of a dog humping a cat with “In Memory of Senator George Carlin 1544-2008” scrawled in blue ballpoint, but that was just a topical gesture. The package was a gift for cluing him in about the show: 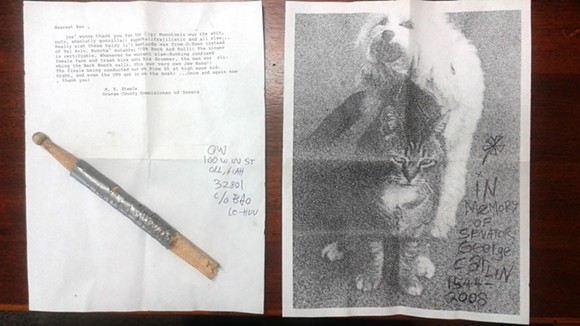 In case you can’t make out the print on your device at hand, here’s the transcript – beautifully unedited, of course:

jus’ wunna thank you for the tip; Monotonix wuz the shit, nutz, absolutly gonzilla!! Superkalifrajilistic and all else… Really wish these hairy li’l bastards was from O-Town instead of Tel Aviv. Buncha’ mutants; 110% Rock And Roll!! The singer is certifyable. Whenever he wuzzant slam-dunking confused female fans and trash bins onto his drummer, the man wuz climbing the Back Booth wallz, this our very own Jew Kong!! The finale being conducted out on Pine St at high noon midnight, and even the OPD got in on the mosh! … Once and again now, thank you!

This package has never left my desk since 2008. But now, I think I’ll move it somewhere more worthy of display, in my home.

And then there was that other time when I wrote about the full-day experience of the Rolling Stones event just last year. I remarked on the astonishing span and depth of the mania still surrounding the band of geezers, citing specifically the old Jaguar hand-emblazoned with the Stones lips on its hood parked behind me early that day at the stadium when I stopped by to pick up my press credentials: 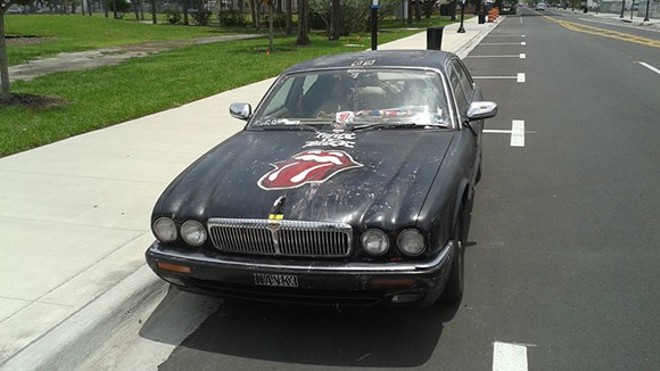 Morgan Steele's car
I used that example because of its sheer craziness. Turns out, that car was Morgan Steele’s.

Though we weren’t really friends in the conventional way, he was always around, like some sort of a radiant spirit, of another dimension but palpably felt nonetheless. And so he remains. Shine on, you diamond.