A quick primer before you watch the NBA Draft Lottery 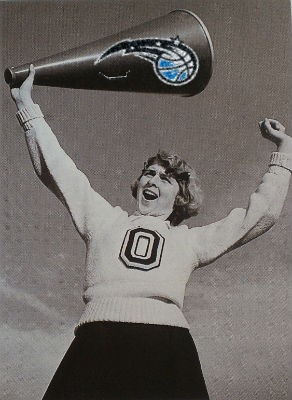 While we were all buying Powerball tickets and hoping to race a lucky fool in Zephyrhills, Fla., to that cool $590 mil., the Orlando Magic as a franchise was probably doubly busy crossing fingers and clutching rabbit's feet, hoping to win the NBA Draft Lottery, which begins at 8:30 p.m. EST and airs on ESPN. According to the numbers and logic of draft lotteries (and every attentive fan still emotionally invested in Dwight's dust), the Magic have the best chances for winning at 25 percent. (Coincidence or conspiracy that 2014 marks the franchise's 25 year anniversary?! Please ignore this, I'm being an idiot.) Over the past few months, I've had a couple people ask me how the draft lottery works. Here it is, short simple and sweet: The 14 teams who did not make the playoffs are entered into the lottery. Those 14 teams are:

The lottery is used to determine the order in which these 14 teams will draft new NBA players. So, just like in our state's lottery, numbered balls are placed in a machine, 1-14. Four of these balls are randomly selected by the machine. The order of the numbers does not matter, so 14-2-5-1 is the same as 1-2-5-14. Now, I'm going to skip over some logic here, but just know, there are 1,001 potential combinations of these numbered balls. One combination is thrown out and not considered, making it a round 1,000 combination possibilities. These combinations are distributed to all 14 teams in a manner that gives the highest potential for winning to the team with the worst season (again, Magic fans, that's you!). So, there are 250 combinations, out of 1,000, that would result in the Magic winning the lottery. In contrast, the Utah Jazz only have 5 possible combinations to win.

The lottery winner gets the first pick in the NBA Draft. The top three picks of the NBA Draft are chosen by lottery-winning teams, and then the lottery results are forgotten and all new players beginning with the fourth round are drafted by teams in order of their season records, worst to best. Here's one final note, though, to keep in mind for newbies: teams trade their draft picks all the time, so if a team is drafting "out of order," it's due to an agreement that happened during a previous season.

You should also know that even if the Magic get the number one pick, they could still trade away that pick if a team presents a deal that could benefit the franchise more (like they famously did in 1993 with C-Webb). Now that you have Hennigan on your side, hopefully that means more quality drafting, and in a draft pool that is widely regarded as fairly shallow this year, it should be a relative comfort with Hennigan at the helm, that no matter what, you'll be sitting prettier than the lowest rung on the NBA ladder this time next year. Boy, that Hennigan goes down smooth: