EUGENE SNOWDEN This should be amazing. Oh, sure, the music will be all right, but that's not what we're talking about. What will be amazing is if Eugene shows up. When it comes to leaps of faith, booking Eugene Snowden into a monthlong residency ranks right up there with actually believing those terror-threat alerts that always come on the heels of bad Bush press. Although we've never personally experienced a Eugene-related cancellation, he's not exactly known as the easiest man in town to track down, so expecting him to be in the same place on the same day of the week for a month is just a little dreamy, if you ask us. Eugene's onstage fire and mercurial personality are just two of the things (or are they one and the same?) that makes him so welcome in a bar, no matter if he's playing or not. But when he does play – whether it's a all-over-the-place Afro-funk jam with Umöja or a hip-swinging soul gig with The Legendary J.C.'s – it's always a good time, thanks both to his outsized presence and his uncanny ability to surround himself with some of the best musicians in Orlando. Who the hell knows what he'll be doing tonight, but rest assured, it's likely to be the most interesting thing in town. That is, if he shows up. (10 p.m. at The Peacock Room, 407-228-0048; free)

50 BOOKS/50 COVERS We all know the adage about judging books by their covers. That old saw doesn't hold true at the American Institute of Graphic Arts (AIGA), an organization with an annual mission to judge book covers as part of their "50 Books/50 Covers" competition, which was established in 1923. The winning entries are put together for an exhibition that travels around the country, visiting local AIGA chapters. The assembly of 2004 victors makes its way here, hosted by the Orlando chapter, which is headed by Tom Hope. Though the exhibit will hang around the Orlando Public Library for two weeks in glass exhibition cases, this one-night reception will find the books out in public for bibliophiles to touch and feel, just like the publishers intended. There won't be a formal talk or presentation of the works, just a lot of books lying about. There are two different aspects that have been judged, explains Hope. "One is simply the covers themselves. The other is the entire book design." Some are pretty elaborate, involving specialty binding or papers; others are concocted of more traditional ingredients. For a thorough overview of the 2004 competition, visit the AIGA website (www.aiga.org/content.cfm/ 5050_2004). Just remember, you can't judge a book by how its cover looks online. (6:30 p.m.-9:00 p.m. in the Albertson Room of the Orlando Public Library, 407-835-7323; $12 general admission, $6 for AIGA members who RSVP via orlando.aiga.org)

HEADDRESS BALL Why do we like the Headdress Ball better than the Republican National Convention? Because it spotlights the ridiculous things people can have on their heads, instead of inside them. This 15th annual fund-raising gala again seeks to identify the Central Floridians who are best at gussying up their noggins with plumed, multitiered or otherwise elaborate creations. (Once open to corporate-sponsored entries, the contest is this time restricted to headdresses crafted by industrious individuals, just to keep things fair.) Celebrities like Backstreet Sib Aaron Carter, Amazing Race star Reichen Lehmkuhl and porn queen Juli Ashton will judge the featured headdresses in categories ranging from "Most Exotic" to "Most Outrageous." And when the rapt ticket holders aren't witnessing the aerodynamic potential of modern millinery, they'll sample a gourmet bill of fare and take in the sights and sounds of an entertainment program produced by the venerable Mark Baker. From the neck-up ostentation to the world-class spread (no, not you, Juli), the entire evening benefits HIV/AIDS agency the Hope and Help Center of Central Florida. Also, guests are encouraged to arrive in black-tie garb rather than headgear of their own, to protect the proceedings from collapsing into anguished cries of "Down in front!" (5:30 p.m. at Royal Pacific Resort, Universal Orlando; 407-645-2577, ext. 112; $175-$2,500) 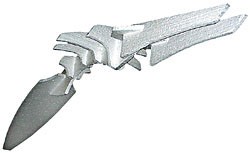 COLOSTOMUS Little by little, tasteful-kitsch specialist and mobile maker Doug Rhodehamel is becoming as much of a fixture at The Peacock Room as ... well, as the ubiquitous Pat Greene. (Dammit! We vowed we'd never print that name again. Now we have to drop another quarter in our Pat Greene jar.) This month, the famously mischievous Rhodehamel showcases his playfully ironic (or is it "ironically playful"?) style in a one-night-only installation that sounds downright intestinal. "Colostomus," it's called, a logical enough name for an 18-foot Styrofoam skeleton that will hang from the ceiling of the Peacock's performance room – and, if there's any biological justice in this world, point the way to the rest rooms. Rhodehamel encourages patrons to walk around under his artificial, vaguely aquatic fossil to get the best possible gander at its innards. But if you're willing to spend a protracted period of time standing under something named for excretory dysfunction, you're hardier souls than us. (8 p.m. at The Peacock Room, 407-228-0048; free)

JORDAN KNIGHT It would be nice if we could call this a welcome comeback, or even a comeback at all, for that matter. But nevertheless, former New Kid on the Block Jordan Knight continues to waft around in the ether with sundry other relics of musical merchandising detritus, poking his head out occasionally just to be knocked down with a padded mallet. Sure, there was a time when somehow in our collective distraction we felt a slight choreographed pang for something resembling "The Right Stuff," but the following onslaught of TransContinental boy band overdubs has duly pre-empted any possible nostalgia with plain disgust. That, and the fact that Knight is currently on the Wal-Mart route to career resurrection, with no less than two VH1 atrocities (Bands Reunited and The Surreal Life) and a New Kids remix album under his growing belt. Predictably, all are very bad, with the VH1 docket revealing something we didn't need to see: Jordan Knight is both fat and mean ... even next to Brigitte Nielsen. A no-need-to-hear second solo album is threatening on the horizon (some of which he may be featuring at this gig), but for the most part, Knight is hanging tough on the past, scratching it up for remix appeal. (with Nine 13; 8 p.m. at The Social, 407-246-1419; $20) 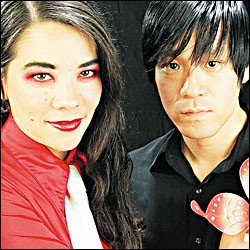 IQU The music press has been heralding the current wave of dance-punk as the cure for rock's boredom for quite some time now, but no band has yet been able to shake the disposable affections of said genre. Seattle duo IQU (pronounced ee-koo) could very well change all that. Part garage band and part epicurean electronica, members Michiko Swiggs and Kento Oiwa fuse snippets of hot space-station disco with whirling '80s hipster funk, sampling sounds from cell phones, keytars, theremins and any other lo-fi electronics they can get their hands on, to create as sound that's as memorable as it is ass-shaking. And whatever polish the duo lacked in their stint at K Records, they've more than atoned for on their new disc Sun Q in pure songwriting chops and pop sensibilities. Mark our words, now's the time to invest in parachute-pants futures. (with Yip Yip, A Scissors; 9 p.m. at Will's Pub, 407-898-5070; $5)