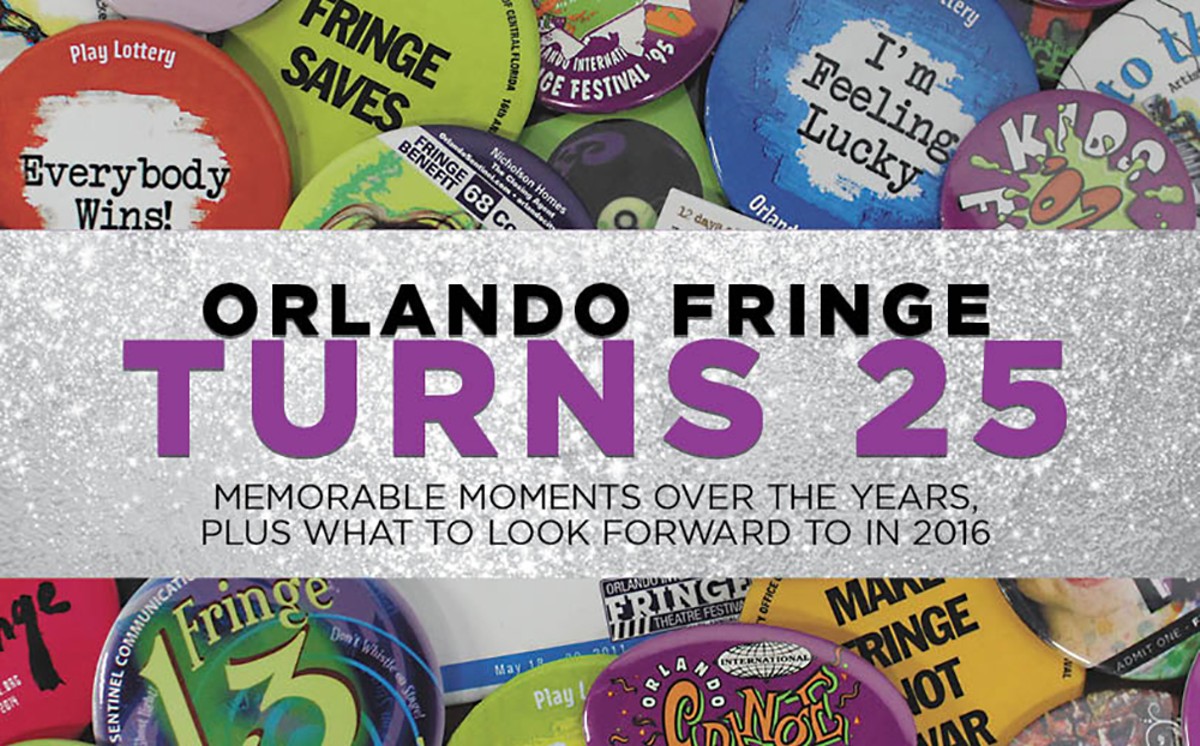 Once again, it's time for the Orlando International Fringe Theatre Festival (renamed earlier this year as simply Orlando Fringe) – and this year our readers' longtime favorite annual arts event is even shinier than ever. That silver sheen the Orlando Fringe is sporting is in honor of its 25th edition. In that quarter-century, the fest has seen countless peaks and valleys, scandals and tragedies, inspiring performances and exposed genitalia. With far too many highlights to list them all, here's my highly subjective and completely biased list of 20 memorable moments from Fringe's history, along with five show picks from this year's festival that we might be talking about 25 years from now.

1992: Orlando Fringe is founded It all started with three members of SAK Theatre (Terry Olson, Andy Anthony and Rick Kunst) and a dream to start an unjuried, uncensored festival in the spirit of Edinburgh, Scotland's famous Fringe. That first year there were only 34 shows in four venues (barely a quarter of the festival's current size) performing in derelict downtown storefronts, but it was the beginning of something big.

1994: Wanzie's first Fringe Prolific producer-playwright Michael Wanzie's campy comedies have become synonymous with Fringe, but his first Fringe outing was the intimate wartime drama In Close Quarters, which he's reviving this year. Without it, we might never have seen Wanzie's The Lion Queen, which remains the Festival's all-time top seller.

1995: Fringezilla debuts Who's big and green, loves children, and smells like Febreze? Everyone's favorite Toho knockoff originally appeared in 1995 as the festival's official mascot, and later became the symbol of Kids' Fringe, spreading the word about Fringe at his costumed appearances.

1996: Sentinel sponsors Fringe Fringe's first few years were decidedly scrappy, but in 1996 they snagged a sponsorship from the Orlando Sentinel, with the festival schedule published in the paper. At the time OW sniffed that Fringe "has sold its soul," but the Weekly printed Fringe programs a few years later.

1998: Fringe goes full time The first festivals were largely financed out of the pockets of its founders, but when they stepped away to pursue other work, Matt Wohl stepped up as the Fringe's first full-time producer. Wohl was followed by many others (notably, successor Brook Hanemann), but his hiring marked Fringe's start as a professional year-round organization.

2000: Tod Kimbro gets LOUD Zombie Doorman in 1997 was the first Fringe show from Orlando's multitalented Tod Kimbro, but it was his ambitious 1999 teen terrorism musical LOUD that really grabbed my attention. LOUD is still crying for a full-scale revival, but Kimbro has become a key Fringe figure in the decades since.

2000: Naked Guy nearly nixed In one of Fringe's most notorious incidents, the Oops Guys (Fiely Matias and Dennis Giacino, who later created the hit Bitches of the Kingdom, aka Disenchanted!) were threatened with arrest over their play The Naked Guy. The cops were called off, but the controversy created then-record crowds.

2001: DCO's final show Fifteen years after Discount Comedy Warehouse sold out and moved west, no one has yet surpassed their sketch comedy. Audrey Kearns' GeekGirlAuthority.com is essential reading, and hubby Brian Bradley's sitcom Uncle Buck debuts this June on ABC, but we're still dreaming of a DCO reunion.

2002: Fringe in flames When a blaze burnt down Church Street's old Bryan Hotel, it took most of Fringe's property – everything from paint and podiums to past programs and photos – with it. That could have spelled curtains for the festival, but thanks to producer Chris Gibson and financial manager Alauna McMillen, Fringe survived.

2004: Toxic Audio in NYC Disenchanted! may be the most recent Fringe product to be produced off-Broadway, but Toxic Audio (now known as Vox Audio) started the trend. The vocal ensemble debuted at Orlando's 1998 festival, and by 2004 they had a Drama Desk Award-winning show in New York City, showing just how far Fringe can take you.

2004: Fringe nearly folds The 13th Orlando Fringe was the first and only for executive director Ed DeAguilera, who left the festival deeply in debt. The fest could have capsized, but Chris Gibson's successor, Beth Marshall, stabilized the ship and steered Fringe into a decade of growth.

2005: Fringe moves to Loch Haven After a year split between downtown and Loch Haven Park, freshman producer Marshall moved the entire Fringe to its current home. At the time many argued the posher digs would stifle Fringe's bohemian nature, but the refreshingly rodent-free venues proved wildly popular.

2006: Buddy comes out Mayor Dyer has been a fixture at recent Fringe ribbon-cuttings, but his first official festival appearance was nearly his last when he was photographed being kissed by drag queens. "I thought I was done with elected politics," Hizzoner said afterward.

2006: Pet Fringe Think that Fringe plus Kids' Fringe and Visual Fringe aren't enough? For a couple of years, there was also a Pet Fringe, attended by cats, dogs and other domesticated critters. It didn't last, but it was early proof of the recent motto "Anyone Can Fringe."

2007: VarieTease triumphs The 16th Fringe birthed several festival favorites, including Dewey Chaffee's Wayburn Sassy, but my favorite "fucking mindblowing" discovery of 2007 – after meeting my wife – was VarieTease. Carnivale (which is being revived this year) wasn't VarieTease's first show, but it brought Blue Star and company out of the dance clubs and into Fringe's spotlight.

2010: Enter the closet Nearly every inch of the Lowndes Shakespeare Center has been used as a Fringe venue, including the bathrooms. Nothing better represents the Festival's "art anywhere" attitude than the Jamie Mykins Theatre, which artist Jeff Ferree established in a Shakes closet for his Captain Discovery puppet shows.

2010: Feldman camps out Speaking of unconventional venues, performance artist Brian Feldman (who is recovering well after recent injuries) earned the "least convenient location" award for Fringe of Nature, which he performed in a tent pitched in Wekiwa Springs State Park. Fortunately, no spectators were eaten by alligators.

2011: Beth Marshall steps down When producer Beth Marshall announced she was stepping down at the end of the 20th Fringe, it sent shockwaves through the festival community. A Fringe fixture for more than a decade, Marshall is still producing shows locally and on the touring circuit, while veteran Fringe artist Michael Marinaccio joined executive director George Wallace as the festival's new producer.

2012: Hard Rock lives Over the years, Fringe has had sponsorships from Florida Theatrical Association, Disney, Blue Man Group and other heavy hitters. But it really hit the big time with its first Fab Fringe fundraiser at Universal Orlando's Hard Rock Live, which has also offered a line of collectors' pins.

2016: Guinness for McGrath Festival board member Matt McGrath passed away earlier this year, but his legacy won't be forgotten at the beer tent, which will be pouring Guinness this year as per his last will and testament. Raise a pint to the proud Irishman, and toast another 25 years of Orlando Fringe.