In 1933, President Franklin Roosevelt announced the creation of the Public Works of Art Project, a short-lived but prolific New Deal program that put artists to work during the Great Depression. In the six months the program lasted, nearly 4,000 artists created 15,600 murals, paintings and sculptures, all paid for by the federal government. The artists were instructed to "document the American scene," and much of the resulting art, including the pieces displayed in this exhibit, paints an industrialized portrait of 1930s-era United States, full of grim-faced workers and ?stoic scenery.

Generally, lush landscapes and the wealth of nature's beauty aren't associated with this style of art, but a few paintings in this show illustrate the drama with which many artists interpreted the natural world. In Paul Kirtland's painting "Jungle," monkeys and deer cavort beneath palm fronds in a stylized tropical forest. Paul Kauvar Smith's "The Sky Pond" shows a broad view of brilliant, burnt-orange cliffs ringing a pond high in the Colorado Rockies. Ila McAfee Turner's "Mountain Lions" captures a pair of majestic animals, eyes glowing green, surveying their mountainous world from high atop a rocky ledge.

"Coal Tower," by Max Arthur Cohn, provides chilling contrast to these nature scenes: A dark building with dimly glowing windows juts into the sky, surrounded by a stark, man-made landscape. "At Madrid Coal Mine," by Carl Redin, shows a megabuilding constructed into the side of a mountain - at its base a "breaker," which chops coal coming out of the ground into chunks, prepares cargo for a diminutive locomotive nearby. In these paintings, the power of man over nature is paramount, free of irony or self-doubt.

But it is the people in the paintings that bring the viewer deep into the psyches of Depression-era Americans. In Pino Janni's "Waterfront Scene," for instance, two longshoremen are hunched in submission before the shipyards. The work is full of weight and muscle, from the huge arms of the men to the heavy rope lying on the ground before them. Work, a precious commodity in the 1930s, is elevated to solemn nobility here.

Industrial might was easy to aggrandize, particularly in contrast to how we work today: Earphoned lap tappers sitting in coffeehouses are hardly the stuff of heroic portraiture. Still, ?one can't help but feel connected ?to these paintings, given our economic climate. It's as if they portray a necessary step toward progress. Like the young girl in Robert Brackman's painting, "Somewhere in America," who sits in a chair and stares calmly but questioningly at the viewer, we seem to be asking what will come next. 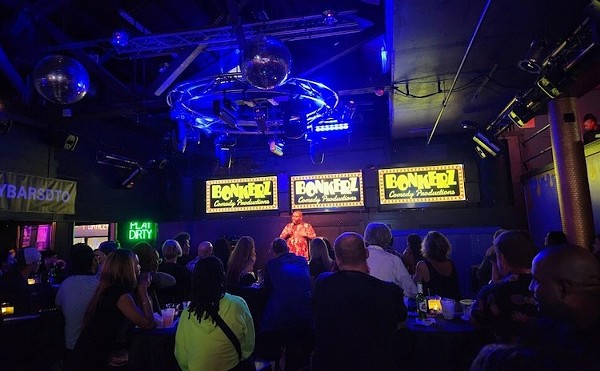