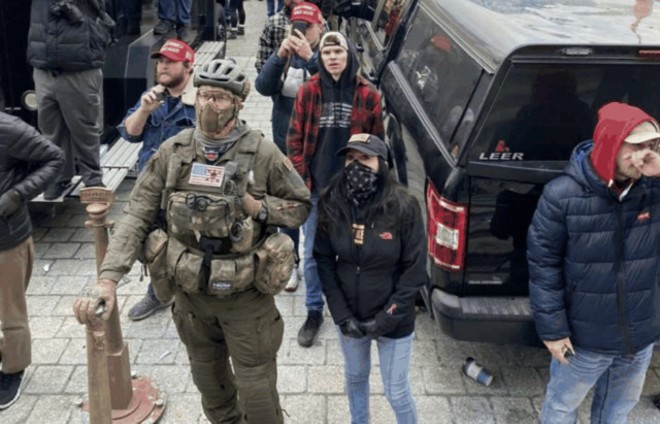 Jeremy Michael Brown — a former U.S. Army special forces soldier, Oath Keeper, and one-time congressional candidate in Tampa — was arrested last month and is currently in jail for his alleged role in the deadly Jan. 6 insurrection at the U.S Capitol.

But before he went to jail, federal authorities believe he accidentally revealed a hidden cache of weapons and explosives in a Zillow listing.

According to an FBI search warrant filed last week, authorities say the 47-year-old put his home up for sale just before his arrest, and included a photo of an incriminating whiteboard.

The photo of the whiteboard shows columns titled "Clothing," "Food," "Communicate," "Move," "Shoot," "Currency" and "Shelter," and lists various items underneath each category. However, under the "Shoot" section, Brown lists "flash bangs," referencing that he had them "on hand," which is a problem because authorities say Brown “is not registered to possess explosive devices.”

The FBI is now seeking a search warrant for a trailer located on Brown’s property, which they believe he bought about a month ago and is under his girlfriend’s name.

“[I]t is unlikely that an individual would market a home available for public inspection with guns and explosives inside of the home, [thus] it is probable ammunition, and explosives, which constitute potential evidence in the investigation, have been moved to the RV or trailer,” says the warrant.

Authorities add that Brown "coordinated travel plans and rendezvous points" using the encrypted messaging app Signal. "We have a RV an Van going," said Brown in one message, "Plenty of Gun Ports left to fill. We can pick you up."

Brown was arrested on Oct. 2, and according to the warrant, officers found a sawed-off shotgun, two grenades, a rifle and over 8,000 rounds of ammunition.

The Daily Beast first reported on the warrant.