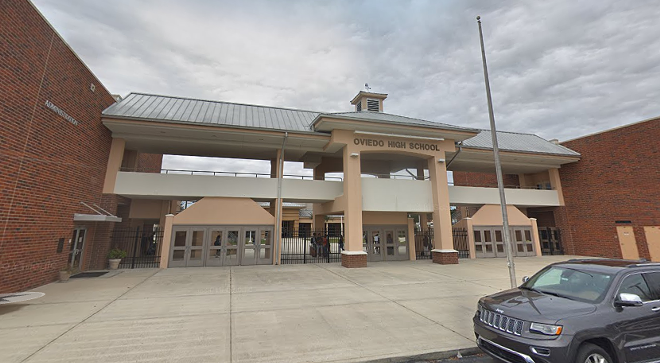 Oviedo High School's homecoming came to a sudden and scary end after a rumor of an armed student spooked attendees.

Principal Trent Daniel sent a message to parents, saying that the dance ended due to students' reactions to the rumor: a quick exit of the dance.

"A student was not allowed to enter this evening's Homecoming dance. There was a rumor circulated later that this student had a gun. The Oviedo Police Department apprehended the student in question off campus and did a thorough search. No gun was found," she said. "The students responded upon hearing the rumor by exiting the campus quickly. As a result of students exiting so quickly, the dance ended. They should be commended for their fast thinking and quick exit. I am so sorry this interrupted their Homecoming Dance. Please give us time to determine next steps."

The Oviedo PD shared reports of a possible gunshot near the school at the time of the dance.

Altercation at Oviedo HS tonight and OPD is investigating potential gun shut. No students were harmed and the homecoming dance has been shut down. The students involved are in custody and no students remain on campus. Please contact your student; pickup is at Cross Life Church.


A joint statement from the school district, Oviedo Police and Seminole County Sheriff's Office said that rumors of the gun were unfounded.

“We wish to clarify that no shots were fired and there was no altercation on campus as rumored,” they said.