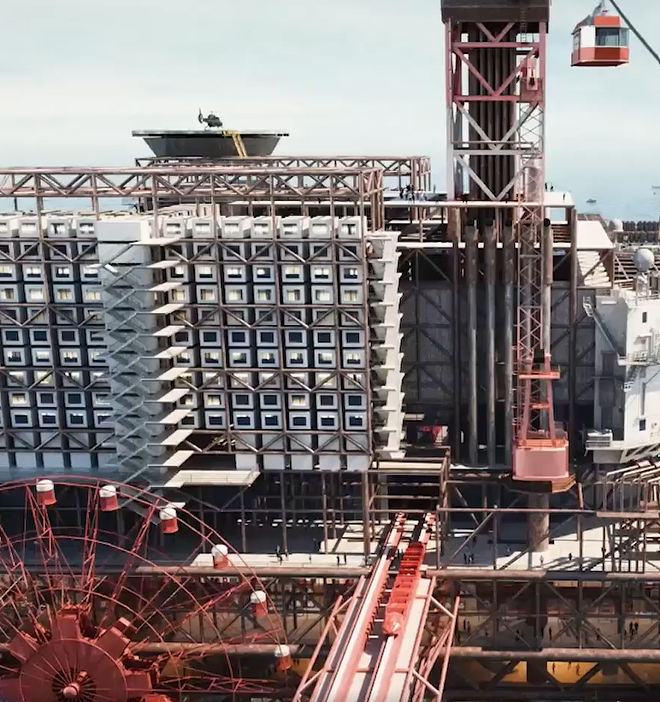 As Joe Biden tries to reassure the world that America is ready to take climate change seriously, back at home, it’s clear that no matter who will control the White House come 2024, America and much of the world is finally moving away from oil. After becoming one of the wealthiest nations on earth thanks to the black gold found under its sand dunes, Saudi Arabia is now working to transition its economy off oil and giving us a unique look at the opportunities the infrastructure left over from the oil industry could provide.

While the food and accommodations are impressive, the real star of the Rig is the entertainment. From submarine tours to ziplines, the Rig is focused on providing attractions that harness this unique location. Concept art for the attraction shows a large observation wheel hanging off the side, and ziplines have riders hanging hundreds of feet above the ocean below. A second platform nearby has a rooftop water park and a roller coaster that tilts riders over the edge of the structure. For thrill-seekers, bungee and BASE jumping will be offered.

Cost and timelines were not shared regarding the project, but if it is a success, it may provide a blueprint for Florida.

With nearly 2,000 platforms in the Gulf of Mexico, oil is still a significant industry in the region. But after the high-profile BP oil spill in 2010, voters in Florida passed an amendment in 2018 that blocks new offshore oil drilling in state waters, and drilling remains unpopular. As the current wells dry up, some may be decommissioned instead of moving to a new location.

In the years leading up to the pandemic, Port Tampa Bay saw the largest increase in embarkations nationwide. Despite the Gulf of Mexico being among the fastest-growing cruise regions globally, the area still offers little in the way of unique ports-of-call and cruise entertainment.

One issue for Gulf of Mexico-based cruise itineraries is the Passenger Vessel Service Act of 1886. This rule blocks foreign-flagged ships from transporting passengers between two U.S.-based ports. This means cruise lines, which register their ships in foreign countries for several reasons, can’t have two back-to-back U.S.-based ports of call. For cruises coming out of the Gulf of Mexico, this has meant at least a few days at sea as the ship moves beyond U.S. waters. It’s also meant fewer cruise ports in the Gulf of Mexico and, with it, fewer points of interest for these cruises, at least until they navigate past Florida or arrive in Mexico.

With the PVSC potentially being lifted after its 136 years, Gulf of Mexico cruises may soon look very different, but there’s still a lack of unique offerings along the U.S. Gulf Coast. A concept similar to the Rig may be a potential option for cruise lines. The Rig in Saudi Arabia will have a cruise terminal built in, allowing cruise passengers to visit easily. As cruise lines move to differentiate themselves, a similarly unique offering could make sense for the Gulf-based cruises, especially if it can be coupled with improved U.S.-based itineraries.

While promising, there’s no indication others plan to copy what the Rig is doing, and, like many Middle East-based attractions, the Rig is just a concept — for now.