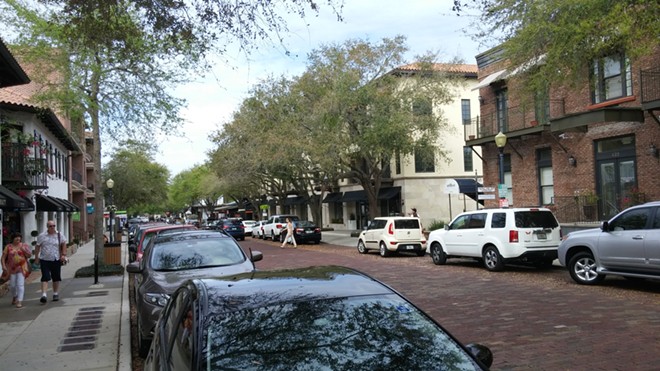 Two decades later, housing access in the region has become a full-blown crisis. One study found Orlando outpaced high housing cost cities like Portland, San Francisco, and Chicago when income is considered. Over the summer, in just one month, single-family home prices in Orlando rose by $5,000. While local politicians try to distract with flying taxis and hammock rentals, one local group is trying to help address a housing crisis, even as they struggle within it.

The Orlando YIMBY group was started in March by a group of locals tired of seeing housing projects blocked by neighbors who were unwilling to support any new development. YIMBY — short for "Yes, In My Back Yard" — is a direct reaction to the NIMBY ("Not In My Back Yard") efforts that have stalled many meaningful attempts at addressing the housing issues.

Austin Valle, one of the founders of the Orlando YIMBY group, is quick to point out that adding a variety of housing options to a region brings a freedom of choice that otherwise wouldn’t exist.

Born-and-raised Central Floridians Valle and Naqiy McMullen have seen housing become increasingly unaffordable throughout their lives, even as wages stagnated. After struggling with being able to afford decent local housing themselves, the pair reached out to a California-based network YIMBY Action for help in forming an Orlando chapter, looking to push for novel housing solutions.

Like many places in the nation, Central Florida has a glut of single-family homes, many with three or more bedrooms, that don’t match shifting family dynamics. The boom of families with two kids and a stay-at-home spouse are long gone. With declining birth rates and an aging population, these once-in-demand housing units are now being forced to meet the demands of a very different cohort.

The housing mismatch didn't occur naturally. Regulations keep more appropriate housing from being built. Garden apartments, like the ones found in downtown Winter Park, are against local zoning regulations in most of the region. Instead, the vast majority of land is still zoned to encourage stand-alone single-family homes, resulting in sprawl, traffic and epic commutes.

Housing for families not seeking a three-bedroom, two-bath house in the suburbs has skyrocketed in price. While places like Los Angeles saw a drop in demand for housing units that don’t include yards, in Central Florida, just the opposite happened. Between 2020 and 2021, condo sales were up over 200 percent and townhome/villa sales up 131 percent, compared to single-family home sales up just 63 percent during the same period. Valle explained that this lack of focus on housing choices and affordability in the region inspired him to start the group.

“Our view is that if the city of Orlando won't make housing affordability a top priority, we'll do it for them,” he said.

Interest in housing options beyond the standard three/two isn’t surprising to Valle. In speaking with the Orlando Weekly, he quickly rattles off why many people of all ages are looking for an alternative.

“Part of the story here is that we need to build more infill housing, which means building more densely where housing already exists. In large swathes of our neighborhoods just outside of downtown, it's illegal to build anything except for single-family housing. That is a great benefit to existing homeowners, but that comes at the expense of renters and young people,” explains Valle.

Pointing to a study published in August that found rents in the region jumped 18 percent in the first eight months of 2021, Valle notes that something has to give.

“I can guarantee you that wages did not increase 18 percent in eight months," he said. "It's not sustainable.” 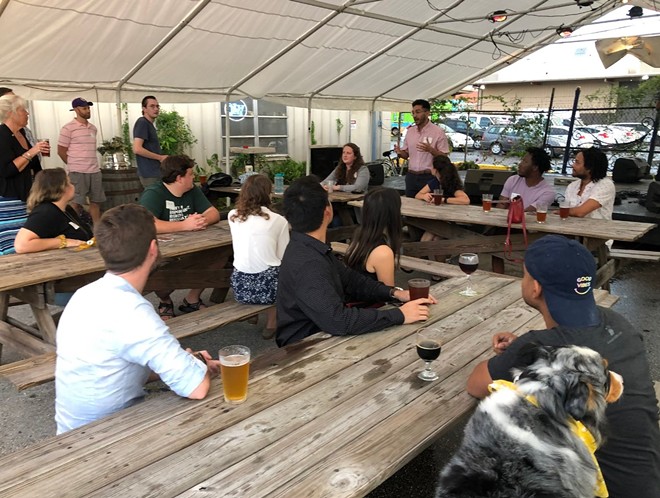 Huddled under a tent outside Orlando Brewing last week, the Orlando YIMBY group swapped stories of their struggles with housing in the region.

During a conversation on the biggest steps that could be taken quickly, McMullen, an avid bicyclist who doesn't own a car, asked why he has to pay for parking spaces he wouldn’t use. A study published earlier this year found one parking space can increase housing prices by 12.5 percent. For a region like Orlando, where housing regularly goes for a quarter of a million dollars or more, that extra cost can be enough to block potential homebuyers from affording housing.

Parking minimums are one of the areas where the Orlando YIMBY group hopes to shift the conversation. In recent years, cities including Miami and Minneapolis, and the State of Oregon, have all repealed parking minimums. In Miami, the move is credited with helping attract smaller, more affordable apartments to areas where other housing options with parking would've been cost- and design-prohibitive.

Repealing parking minimums will likely be a part of the plan Orlando YIMBY hopes to share with the city.

“We announced at our Oct. 1 mixer that we'd be kicking off work to create an 'Orlando YIMBY Housing Plan' for the city of Orlando. This is a big deal for us and for the city. It will be a big group effort,” Valle said. "We know it will address things like exclusionary zoning, higher densities near transit, parking regulations, and funding for affordable housing.”

He praised the steps recently taken in Orange County to help approve more multi-unit housing, then quickly shifted to saying city of Orlando politicians must now also step up and do more to address the region's housing dilemma. The group seems focused on increasing the housing stock in the region through a multi-pronged approach that also addresses the lack of walkability and help encourage more missing middle housing options like those found in older communities, such as downtown Winter Park and downtown Winter Garden.