New moon-shaped casino announced for Vegas, but for space-themed fun Disney is a better bet 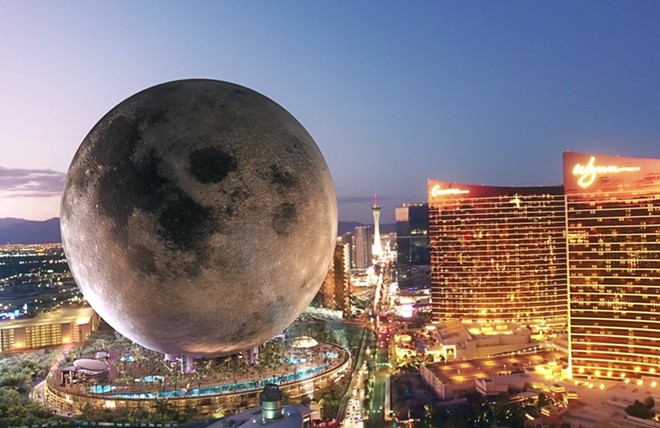 As billionaires try to beat each other by shooting themselves into space, there’s plenty of movement in space tourism for us plebes that don’t have our own rocket companies to promote. From Disney to Vegas, space seems to be the hottest new theme in tourism.

We’re still years, possibly decades, away from affordable and accessible off-Earth tourism, but in the meantime, there’s a wave of new space-themed tourism experiences.

The highest-profile projects are both at Walt Disney World. After unprecedented delays, the Space 220 restaurant opened last week at EPCOT. Themed as a space station located 220 miles above Orlando, the themed dining experience is akin to the California Grill or Coral Reef but with large hyper-real projections of Earth. The new restaurant is also one of the most realistic looks to date of how a space elevator would work. Like its precursor, the hydrolators at The Living Seas, the Stellarvator, as the space elevator is referred to, has obvious issues that keep it from being too authentic.

The same is true for the upcoming Stars Wars: Galactic Starcruiser that’s set to debut next year. Using similar hyperreal simulated windows, the Starcruiser will give guests the experience of a cruise ship in space. That idea is nothing new, but with cutting-edge technology and a dedication to ensuring thematic consistency throughout the three-day, two-night ‘cruise,’ the Starcruiser will be for many the closest they’ve come to a space vacation. Disney is also planning a Star Wars-themed bar on its upcoming cruise ship that will offer a similar window into space. 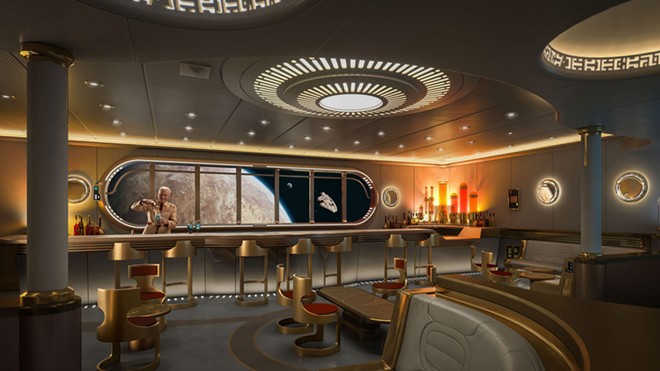 This isn't Florida's first space attraction. Since the early days of launches at Cape Canaveral, the Kennedy Space Center has helped connect to the U.S. space program. In nearby Titusville, a science-focused Mars-themed resort was proposed. The project, known as INTERSPACE Florida, was a mix between a research facility, a multi-day resort, and a science museum. Originally pitched in 2008, INTERSPACE was delayed until 2014 due to the Great Recession. Despite being more than a decade old, the project has many of the same features as projects now being pushed forward. A funding round raised more than $15 million for the project, but it was never realized. Project co-founder Joseph Palaia confirmed to the Orlando Weekly the project was canceled due to a lack of funding. "Unfortunately at the time we were unable to close on the needed investment, and I and my cofounder moved on with our lives. Indeed it was an idea that was before its time."

But by far the most ambitious simulated space tourism project is a new resort announced for Las Vegas. Using a building technique nearly identical to that of Space Mountain, the new casino resort will have a central tower that supports a massive 735-foot tall Moon-shaped building, the largest replica of the Moon ever attempted. Inside, guests will have hotel rooms with views of the lunar surface, and there will be a spacious area for guests to explore the simulated lunar surface.

Some think the highly publicized Moon resort, expected to cost $5 billion, will go the same route as the Titusville project. Scott Roeben of Vegas news site Vital Vegas is one of those skeptics. He sees the recent trend in space-themed tourist attractions as a link to recent launches and unusual theming. “I think over-the-top announcements are always fun to talk about, and this story is over the moon in terms of how ludicrous it is. Beyond the outlandish element, space is a thing at the moment. Every billionaire is blasting themselves into space, so it's in the zeitgeist, despite this particular project being complete science fiction.”

Roeben acknowledges Vegas has always had a unique fascination with space, including previous proposals for a Moon-themed resort, aptly named ‘Moon World.’ This specific project seems unlikely to him due to the location, costs, and design concept. “The proposed site appears to be on land owned by Wynn Resorts, and I can guarantee there is no price where they'd let what is arguably a tacky monstrosity be built on that site. I know, buzzkill.” He admits the bars at Moon would interest but quickly adds, “unfortunately, this project has zero hope of ever existing. It's pure whimsy.” A second Moon resort is proposed for Dubai.

In 2016, a concept similar to the doomed Titusville one was proposed for Vegas. It would’ve simulated Mars inside a massive dome, nearly as tall as Giza's Great Pyramid. Circling the simulated surface would be a large retail and entertainment complex. That project now seems stalled as well. It comes as no surprise to Roeben as he notes, “Vegas is about big dreams, and the vast majority are of the pipe variety.”

Tourists have long been fascinated with space. One of Coney Island’s most successful early attractions was a simulated ride to the Moon. That attraction had debuted at the Pan-American Exposition in 1901, where guests paid double the price of other attractions. The steep cost didn't deter guests, with it ranking as one of the most popular exhibits at the expo.
A similar attraction opened at Disneyland in 1955, where it too saw large crowds. Epcot’s Mission: Space, adding the thrill of the G-forces to a space attraction, opened at Epcot in 2003. In a post-ride area, guests can explore Mars via a computer simulation.

There’s also a push towards actual space tourism. In Las Vegas, there are plans for a spaceport just outside the city, though Roeben thinks this is yet another pipe dream, due in large part to the city’s lack of qualified workers. Back in Florida, Brevard County is trying to keep its space supremacy, with a proposal to change the county's name to Space Coast in an attempt to better market the region. Numerous companies have now set goals of having regular space tourism trips by the end of the decade, with many of the projects launching from Brevard County.

Earlier this year, Virgin Galactic made news when it scooped up one of Disney's most recognizable Imagineers, Joe Rohde. In his new role, Rohde is tasked with ensuring a seamless experience for tourists visiting space from Virgin Galatic's custom-built, hyper-luxury spaceport in New Mexico.

In the 1980s, when EPCOT was new, it was the first introduction for many guests to the global cultures celebrated within it. Since then, access to those distant nations has become far easier for many. Similarly, Space 220 will be the first ‘taste’ of space many guests encounter. But, with dozens of other space-themed attractions and authentic space tourism proposals moving forward, in a few decades, the restaurant may feel as outdated as the land formerly known as Future World.

For now, space is reserved for the smartest and wealthiest. Maybe one day that won’t be the case, but in the meantime, there’s always Disney and Vegas pipe dreams.