Disney Cruise Line is moving into a new Florida port

UPDATE: 07/29/21 - The agreement between DCL and Port Everglades must still undergo a final legal review for by the Office of the County Attorney.

Despite last year’s unprecedented shutdown of the cruise industry, Disney is pushing forward with its plans to add three new ships in the coming years.

That will more than double the capacity for the cruise line, with the new Triton Class ships bringing along 1,250 staterooms. This expansion doesn't just mean more traffic for Port Canaveral, as the line has announced a new home for the first time in decades. 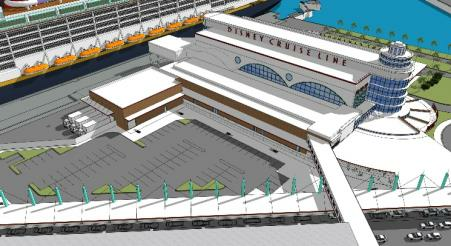 Disney and Port Everglades in Fort Lauderdale announced plans to pursue an agreement that will allow Disney year-round use of Terminal 4 and its corresponding berth. The agreement has Disney using the terminal for at least one year with a ship capable of carrying approximately 3,500 passengers. The Dream class ships can hold 4,000 passengers, but it is unclear when the cruise line plans to return to full capacity in this ongoing COVID-19 era.

Cruise Terminal 4 was previously assigned to Carnival, but that agreement was amended to ease restrictions placed on Carnival, a primary user at the port, while the cruise company regains its footing post-pandemic.

The Celebration, Florida-based cruise line was rumored to be eyeing PortMiami; those plans were squashed last year when it was agreed that Disney would use the MSC Cruises terminal that is now in the works. MSC has faced challenges in developing that mega terminal, but a new financing package that includes DCL’s use and an extended financing timeline was approved last year.

The MSC terminal is currently scheduled to be finished in mid-2023. It is designed to handle up to three ships at the same time and can welcome more than 36,000 travelers through it per day.

The move to shift a share of its South Florida presence from PortMiami to Port Everglades comes as a surprise as Brightline is currently developing plans to connect PortMiami to its passenger rail system. In Central Florida, the same line is also planned to eventually connect to Disney Springs. This will allow cruise passengers to travel directly from Disney World to PortMiami. Such a connection would be ideal for Disney Cruise Line’s popular Land and Sea packages, which include a cruise and a stay at Walt Disney World. Disney used Mears Transportation for its Disney Cruise Line connections, but that relationship was reportedly strained when Disney announced it was suspending its Magical Express buses to and from Orlando International Airport.  Disney informed Mears it would be ending the service the same day it went public with the announcement.

Some pointed to Brightline’s connection between Orlando International Airport and Disney World as a possible reason for not renewing the Mears contract. That’s unlikely, as the Brightline connection is still years away.

The Disney Wonder was welcomed to Port Everglades earlier this month, but that ship, like its sister, the Disney Magic, has a passenger count that’s smaller than the ship that will eventually call Port Everglades home. The Disney Wonder was moved to the port earlier this month from PortMiami to make way for a Royal Caribbean ship used for housing for Surfside emergency workers.

Disney Cruise Line will resume sailing on August 9, with the Disney Wish now scheduled to launch next summer from Port Canaveral.