Coffee and Cedar
Blue Venue, $10
So far this Fringe Festival, I’ve seen shows about men fucking men, women fucking women, pigs fucking frogs, fairy queens fucking asses, and other couplings too explicit to mention. So it comes as somewhat of a relief to see a show where nobody fucks anything for a change. Of course, if you made it through those first two sentences without choking, then the sweet family-friendly Coffee & Cedar probably isn’t for you, but the entire run is already sold out anyway, and deservedly so.

Author D.H. Cermeño adapted the script from his own award-winning book about an orphaned aspiring actor (Jonathan Jimenez) sharing cherished stories of his supportive Spanish grandfather, Atun (Russell R. Trahan). Under Jac LeDoux’s warm direction, this unassuming production is as comforting as a cup of hot coffee, and as cozy as the inside of a blanket-stuffed cedar chest. The dramatic stakes are pretty low in this gentle play, whose plotline revolves around school play auditions. But the relationship within this intergenerational family is genuinely touching, and inspirational encouragement not to let anyone smother your talent is something we could all stand to hear. 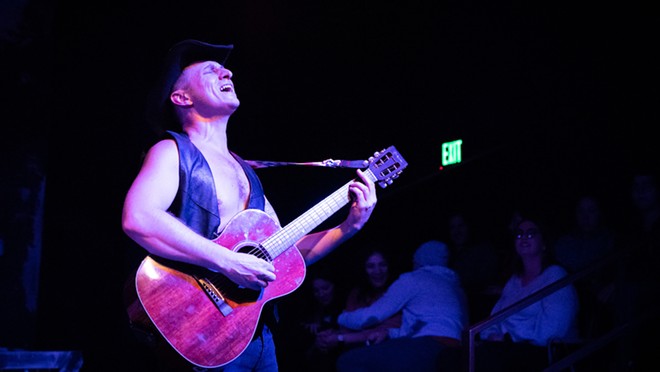 DKTV: Live! ... (Not a Zoom Call)
BYOV: The Abbey, $12
DK Reinemer tossed a mattress into the back of his minivan and gave a hand job to a trucker for a gallon of gas, just to get here from Washington and perform this show — which he originally planned on delivering over the internet — so you'd better damn well appreciate him, Orlando. (Just to replicate the authentic online show experience, he’ll still be stuttering randomly with his pants off.)

Raised by wolfish hippies on a diet of carob and cannabis, DK shares autobiographical stories, standup-style skits and original songs with a slideshow of family photos. DK has grown from a politically precocious pubescent to a cryptocurrency-shilling sellout, and his fast-paced show is packed with parody commercials, painful puns, audience participation improv and Baysplosive yoga poses. The finale features reunions with hilarious GI Joe- and Magic Mike-spoofing characters from shows past. Before closing time arrives for this auto-award-winning show, DK has literally jumped the shark, but in the hands of this absurdly incompetent comic, that’s actually a very good thing.

Hexed: A Femme Rock Musical
Silver Venue, $12
It’s another October, which means it’s time for five wannabe Wiccans (Molly Cabbage, Cathy Colburn, Kristie Geneg, Cara Langston, Emilie Scheetz) to select their Halloween costumes, watch some old horror flicks, gripe about men and possibly summon some spirits. Hexed, an original female-focused goth-rock musical, is a bubbling cauldron of Hot Topic clothing and clinical depression that produces an intermittently powerful potion. The wall-of-sound musical score by composer Andrew Barret Cox frequently rocks, but the cast’s big yet undisciplined voices have trouble blending and balancing with the bass-heavy backing tracks without making a hash of his lyrics. Writer-director Lena Feliciano’s book serves to link the songs, but doesn’t develop much depth in the characters or provide a compelling conflict. These actresses generate genuine girl-power camaraderie with some entertaining humor and heart, but the script’s sexual confessions retread familiar ground, and the teased witchcraft elements arrive too late to be more than window dressing.

I’m excited to see what this talented team tries next, but even as someone who once spent way too much time wearing black and dancing at Barbarella, the spell Hexed attempted to cast over me ultimately fizzled.

La Divina: The Last Interview of Maria Callas
Green Venue, $10
Legendary Greek opera star Maria Callas was both a woman and a serious artist, and she says right at the start of La Divina that she wants you to judge her as such while she shares her life story. From the first chill-inducing notes of “O Mio Babbino Caro,” it’s clear that Shelley Cooper’s soaring soprano is up to the challenge of evoking the voice that “brought along a universe” when she sang. But Cooper (who created the show in 2010 for her UCF master’s thesis) is also compelling while conversing with an unseen interviewer, emphatically enunciating her artistic philosophy on the difference between technical perfection and emotional expression. Cool and composed, the imperious Callas lectures us on the origin of her prima donna reputation, while granting glimpses of the lost childhood and internalized fat-shaming that once compelled her to shed 60 pounds in a single year.

The Callas that Cooper personifies isn’t a very pleasant person, but her Rossini-reviving musical reputation still deserves respect. Cooper’s poker-faced delivery means that the script’s dramatic dynamics remain restrained, apart from a few fiery flashes of anger around the abusive Aristotle Onassis. But Cooper’s voice and incisive artistic insights should earn audiences’ respect as well for showing both sides of this pioneering performer.


Orlando Fringe Presents: Tonight at Midnight
Orange Venue, $10
I’ve seen things you non-Fringers wouldn’t believe at Tonight at Midnight. I’ve seen host Rauce Padgett on fire across the shoulders of sidekick Joel Warren; performing perilous pirouettes alongside the cast of VarieTease, and getting groped by Theatre Group Gumbo while band leader Cesar de la Rosa grooved. I’ve watched guest star Ginger Minj glitter in the Gold venue, dishing about RuPaul’s fake fabric walls. All those moments will be lost in time, like tears in the beer tent. Luckily, you’ve still got two more chances to blow off some steam at this spoofy late-night talk show, which has the bonus of financially benefiting the Festival. Time to laugh!

Shakespeare's Reservoir Dogs
BYOV: The Abbey, $12
With their last two hit Fringe shows, Hardly Working Productions gave us Elizabethan reimaginings of Ghostbusters and Terminator 2. This year, they continue to work their way down my all-time favorite film list with a Shakespearean staging of Quentin Tarantino’s debut crime thriller, and it’s easily the best effort yet from director David Strauss and producer Deena Ronayne. As in the movie, four color-coded thieves gather after a botched jewel heist to determine which one is the canker in their hedge, but this team has traded in their handguns and pop culture references for razor-sharp rapiers and classical allusions.

Credit goes first to Stephin Hopley’s smart script, which faithfully follows QT’s original screenplay beat by beat, but transforms the text into Olde English verse; the dialogue brims with clever nods to Macbeth and The Merchant of Venice without slavishly cribbing quotations or simply swapping in archaic pronouns. But the true honors go to the gender-blind cast, led by three exceptional actresses in the central roles of the injured Sir Orange (Nikki Darden Creston), the paranoid Sir Pink (Katherine Riley) and the world-weary Sir White (Marcie Schwalm). They all tackle their testosterone-soaked roles and make them their own without imitating the iconic original actors; Creston’s brief take on Tim Roth’s drug-smuggling monologue is a particular highlight.

Fans of the film will find great fun in recognizing the iambic equivalents of quotable dialogue, but even those ignorant of the original will enjoy the potent plot, sharp performances and brutal stage combat choreographed by Bill Warriner. Fair warning: The scene where Sir Blonde (John Reid Adams) gleefully mutilates an officer of the law (Jim Cundiff) remains as gory and disturbing on stage as it was on screen. The show’s only real missteps involve Rob Del Medico’s minstrel character, who strums Renaissance rewrites of K-Billy’s super ’70s soundtrack; his audience-participatory rendition of “Hooked on a Feeling” is hilarious, but his entrances and exits seem to slow down the pace of every scene change instead of smoothing over the transitions as they should.

That one nitpick aside, Shakespeare’s Reservoir Dogs is the best such high-concept film parody I’ve seen at Fringe in years, because it understands and respects the source material without being afraid to tweak it. Lend this talented crew your ears ... just don’t expect to get both of them back.

Smooch
Orange Venue, $12
Any old superhero can avert an apocalypse, but it takes an intrepid agent from the Center of Unleashing People’s Innermost Desires — better known as CUPID — to tackle the truly thorny trouble of human love. In the comic cosmology of Gromalot’s Smooch, celestial matches are made in the acting block clouds, then sealed at school playgrounds and drive-in theaters … but it often takes more than just a simple arrow to bring destined duos together.

Brandon Roberts remains Orlando’s undisputed master of physical comedy, and he’s well matched by his fellow Simlish-spewing diaper-clad clowns at spinning non-verbal nonsense into sidesplitting laughter. Much like a vintage Warner Brothers cartoon, Smooch is a family-friendly show with appeal across all age ranges, although its near-exclusive focus on traditional gender pairings makes this 2014 script seem a little dated among today’s Fringe. SmoochSimlish is full of silly slapstick, but is also sweetly soulful; a segment about an elderly couple bull's-eyed me in the heart like Pixar’s Up before reaching its suggestive punchline.

We Got Love
BYOV: The Abbey, $12
After an extended mood-setting preshow of projected psychedelic imagery accompanied by philosophical quotations from eastern theologian Alan Watts, Californian cabaret artist Brett McMahon opens his one-man musical rave by announcing his intention to let audiences kick back, enjoy a drink and wash away the putrid past year with an hour-long parade of songs about love. Whether singing a torch song skewering ex-President Trump, recalling ridiculous renditions of the National Anthem or rocking a country-fried cover of Kacey Musgraves’ “Follow Your Arrow,” McMahon oozes campy charisma, and his a cappella take on Scott McKenzie’s “San Francisco” was unexpectedly tender. And did I mention that this is also a striptease show, which sees McMahon sporting underwear that leaves little to the imagination?

McMahon is a fine singer, but more importantly he’s an electric stage presence, engaging his audience whether or not you recognize all his eclectic musical selections. Clap along or cringe; this self-avowed flaming homosexual just doesn’t care. McMahon’s got one thing right for sure: this show is a damn sight more fun than watching a guy in a gorilla suit sit in a rocking chair.