Activists deliver thousands of 'past due' $2,000 invoices to Marco Rubio's Orlando office 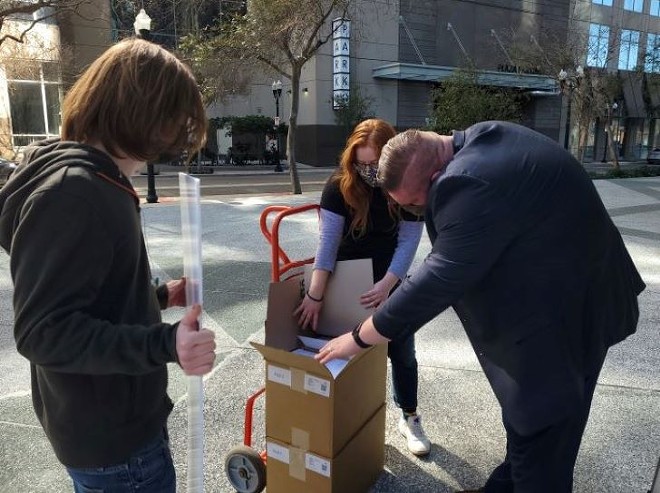 These invoices represented constituents across the nation who signed a Change.org petition — also included in the boxes delivered to Rubio's office — for reoccurring $2,000 payments from Congress for pandemic-related economic relief. This petition surpassed 2 million signatures earlier this week.

The invoices were delivered by Erica Wright, a member of Income Movement, a nationwide grassroots organization that advocates for a universal basic income.

"[The invoice] says 'Past Due,'" Wright explained, "and it has the month of March last year all the way to January. Just to cover all the months we've been in this pandemic."

Rubio is just one of 18 senators in 14 cities across the U.S. to receive invoices from Income Movement.

"Doing past-due invoices seemed like a good way to show Congress it was past due on taking action," said Stacey Rutland, founder of Income Movement, in a phone interview with Orlando Weekly on Thursday morning.

"We thought this would be a creative way to show how many months have gone by," Rutland said.

The Change.org petition was created by Stephanie Bonin, a restaurant owner in Denver who had to close their restaurant and let staff go twice during the ongoing pandemic, said Wright.

Rutland explained that monthly, or at least reoccurring, payments are vital, because people know the stimulus checks are one-time, right now. She said reoccurring payments will give people the ability to plan and budget for the future, instead of constantly playing catch-up.

"I think it's a real shame that Congress has not recognized the real dire effects of the economic crisis brought on by the pandemic," Rutland said. "We don't want people to wait until Congress figures out people need money." 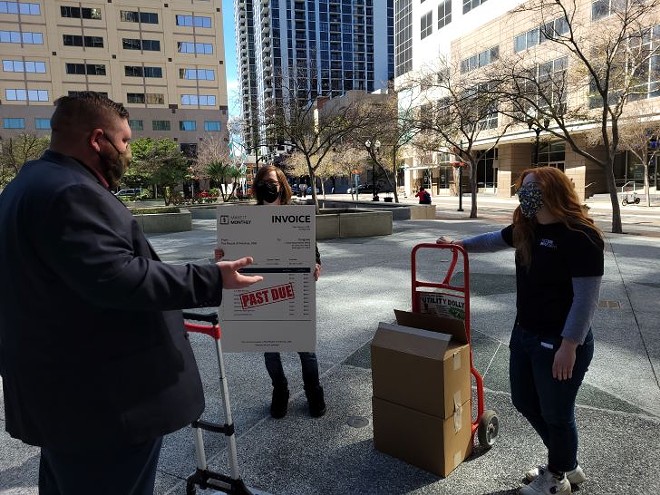 The in-person delivery of invoices is just one of three parts of their action, Rutland said. A social media campaign ran concurrently on Thursday using the #makeitmonthly hashtag, so people could deliver their invoices virtually if they couldn't do so in person.

The final part will be a virtual rally held this Friday, Feb. 5. Rutland said several U.S. representatives will be in attendance, including Reps. Tim Ryan (D-Ohio) and Ilhan Omar (D-Minnesota).

Income Movement and Economic Security Project are just two of several organizations that worked with Bonin to coordinate this event, said Rutland, and it is the result of weeks of collaborative effort.

"We're hoping that with the latest legislation that Biden has proposed, this will spark conversation about monthly payments, or at least regular payments," Rutland said.

Sen. Rubio's office did not respond to requests for comment.