Trump rises from hospital bed to rally in Florida, threatens to give 'big, fat kiss' to 'the guys and the beautiful women' 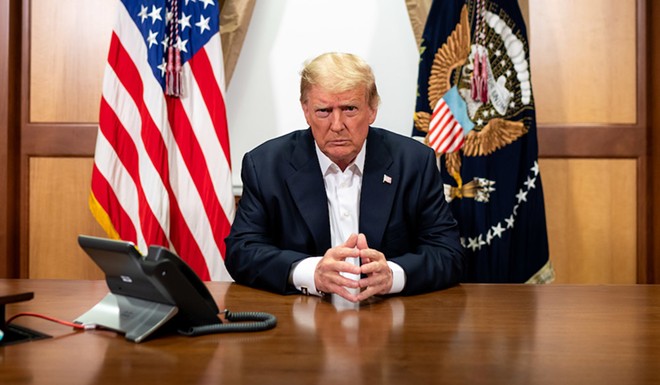 On the eve of his in-person return to the campaign trail in – yay – Central Florida on Monday, President Trump called in to radio host and Presidential Medal of Freedom winner Rush Limbaugh's "virtual rally" several days before to spread the good news of his miraculous recovery from COVID-19

“You know, I was not in the greatest of shape," said Trump during the radio "rally" on Friday. "A day later I was fine, maybe perfect, but I was fine. But a couple of days later, now I’m free. You know, I feel perfect."

Speaking about the experimental antibody treatment developed by Regeneron that he was given by his medical team, Trump claimed it was a cure for COVID-19.

“I’m just saying that we have something that will cure this now," Trump claimed. "And without us, without Trump administration, this would never have happened,”

Trump said later on in the interview that hundreds of thousands of vials are en route to hospitals all around the country, even as Regeneron CEO Leonard Schleifer appeared on the CBS program Face the Nation a day or so later to do some damage control and throw cold water on the president's baseless statements.

"The president's case is a case of one, and that's what we call a case report, and it is evidence of what's happening, but it's kind of the weakest evidence that you can get," said Schleifer.

Moving forward, President Superspreader hit Sanford for a rally on Monday at the Orlando Sanford International Airport, where a throng of fans packed in tight to watch a maskless Trump throw masks into the crowd paper-towel-style and hold forth yet again about his immunity to COVID-19.

“I went through it. Now they say I’m immune. I feel so powerful,” Trump ranted, according to the Tampa Bay Times.

Trump plans to hold additional rallies in Pennsylvania, Iowa, and North Carolina this week. On Monday afternoon, Trump's doctor Scott Conley claimed that the president had tested negative for COVID-19, but (obvious) serious questions about his health persist given Trump's continued evasiveness on whether he's actually being tested. And everything else he says.