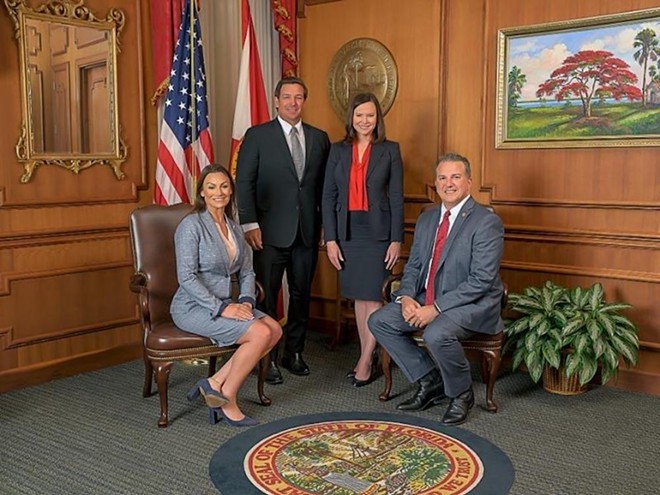 Spending more than $9 million to keep 5,200 acres across five counties from development and replacing the chief judge of the state Division of Administrative Hearings are on tap for the first in-person Florida Cabinet meeting in more than seven months.

An agenda released Tuesday for the Sept. 22 meeting doesn’t include a request by Agriculture Commissioner Nikki Fried to discuss state plans for spending federal stimulus money received because of the coronavirus pandemic.

In a letter Friday to Gov. Ron DeSantis, Fried asked for a discussion of state plans to spend federal “CARES Act” dollars and her push to use some of the money for school nutrition programs.

Fried, the only Democrat on the Cabinet, has argued for months that the four statewide elected officials —- also including Attorney General Ashley Moody and Chief Financial Officer Jimmy Patronis —- should have been jointly coordinating the response to the coronavirus pandemic. She estimated state government has received $4.58 billion from the federal government.

DeSantis and the Cabinet have not met in person since Feb. 4, though they held a meeting by phone on May 28. The governor’s office has pointed to the Capitol being closed to visitors amid the pandemic and a need to keep a safe workplace as reasons for canceling other scheduled Cabinet meetings.

Gov. Ron DeSantis last met with his cabinet on Feb. 4, though they held a phone call on May 28. tweet this
A sixth land deal, for 1,901 acres in Marion County owned by Florida Power & Light, is proposed for acquisition through the Florida Forever Land program at $3.05 million.

The FPL land, comprised of 25 non-contiguous parcels along the Ocklawaha River, is listed in the staff report as providing habitat for such things as Florida black bears and scrub jays. The land may also help complete the Florida National Scenic Trail, a non-motorized trail that crosses several Florida Forever project sites.

The Cabinet is also being asked to draw money from the state’s Rural & Family Lands Protection Program to spend $1.6 million for 668 acres in Okeechobee County and $1.477 million for 748 acres in Highlands County.

State staff members have recommended approval of all six acquisitions.

Also during the meeting, the Cabinet is set to discuss a successor for John MacIver, who resigned as chief judge of the Florida Division of Administrative Hearings in June to become general counsel for Patronis.

The Division of Administrative Hearings is the go-to place for citizens and businesses to redress grievances against state agencies. Decisions issued by administrative law judges are often the first step in lengthy court battles challenging agencies’ rules or actions.

MacIver had been the head of the local chapter of The Federalist Society, an influential conservative legal group, before his Cabinet appointment as chief judge last year. Fried opposed MacIver’s selection as chief judge, saying he lacked the experience to oversee the agency.

MacIver created a stir as chief judge when he issued a five-day suspension of Administrative Law Judge John Van Laningham in April for “insubordination and misconduct.” MacIver went unconfirmed by the Republican-dominated Senate this year.