No, a 'floating cinema' with 'socially distanced boats' is probably not coming to Orlando

Despite the coronavirus pandemic, and also likely because of it, Central Floridians are pretty desperate for some relatively safe entertainment outside our homes. That's probably why organized scammers keep trying to convince Orlando media that exciting, socially distanced events are coming to town.

"Floating Cinema is back, but this time with a twist! This unique cinema is coming to Orlando on 9th September for one week only!" says the email. "The cinema will be made up of 12 to 24 mini boats, holding up to 8 people per boat. Tickets will require you purchase the whole boat to ensure that groups will be seated with friends and family only, and to allow for social distancing on and between boats!"

What does "floating cinema is back" mean, when they've never staged this here before? Perhaps it's a reference to Winter Park's Dive-In Movie event back in 2018, when Jaws was projected onto an inflatable screen for swimmers. But that event was sponsored by the city, and held at Cady Way pool.

Cute! But how do the boats stay facing the screen? What do you do when you have to go to the bathroom? tweet this
Something sounds fishy. But still, socially distanced cinema is music to the ears of a news editor. So we continued reading:

"Movies are set to be a mix between golden oldies and new releases but will be announced when tickets go on sale! There will be free popcorn for everyone attending, and other movie snacks and drinks will be available to purchase before you set sail."

Cute! But how do the boats stay facing the screen? Are they anchored or tethered somehow? Is there a server wading between boats to serve drinks and food? What do you do when you have to go to the bathroom?

(Updated) There are ways to pull off such an event — as the city of Paris recently did, in collaboration with MK2 Cinemas on July 18, along the banks of the River Seine (you can see their logos under the screen in the actual photos). The event was timed with the reopening of their beaches, a new addition to an 18-year annual celebration along the waterfront. That's probably where this idea came from, considering the artwork itself appears ripped off from that event.

The messages promising an Orlando version provide a Zip Tickets link to "be the first to hear about ticket sales!" where you can indicate how many people are in your party and provide your email address. There is no location given, and the name of the organizer is simply "Beyond Cinema." There are no names of actual humans or phone number to call with questions. The sender, "Camila Boyd," uses an email address from a domain name, virtualgamingco.com, that immediately forwards to another generic-looking website.

That means the Orlando version is probably bullshit.

Still, lots of media around Central Florida and much farther away are falling for this. Our colleagues at WESH Channel 2 ran it on Tuesday. Our pals at Pulptown sent it out this morning. They're not the only ones.

Just a random search for this ludicrous floating cinema concept turns up links in outlets like WSVN 7News and Fox Sports 640 in Miami, St. Petersburg's WTSP, Attractions Magazine, and it even pops up in New York, Los Angeles and San Francisco.

Our bullshit detectors immediately went off, not because we're immune to these stunts at Orlando Weekly, but because they've fooled us in the recent past, before the pandemic.

Last year, they got me with a handful of plausible-sounding pop-ups scheduled for the City Beautiful. How was that "PokéBar pop-up" happening in Orlando for one day only last October? You don't remember it because it didn't happen. How about the "Brick Bar" that was to be "built with 1 million LEGOs"? Or the "Pac-Man-inspired maze" set for November? Or what about the nighttime ice rink with bumper cars coming to Orlando?

Each sounded achievable and fun, and it made sense to share the signup links. But after the event dates came and went, and the website domains for each expired and reverted to Wix placeholders, we got wise.

In the era of COVID-19, these scams are even worse.

Fake event pages are always a reliable way to gather contact info for people interested in going out, but the nameless entities behind them now know which Floridians are desperate enough to venture out into a pandemic — at a time of record-high statewide death rates — and which people they can contact again later, long after media outlets stop falling for these.

Here's the tell, this time: If they had really held these events before, they would have actual photographs, really great ones, not the cheap rendering they sent us or the stock photo used on the ticket-purchase page. 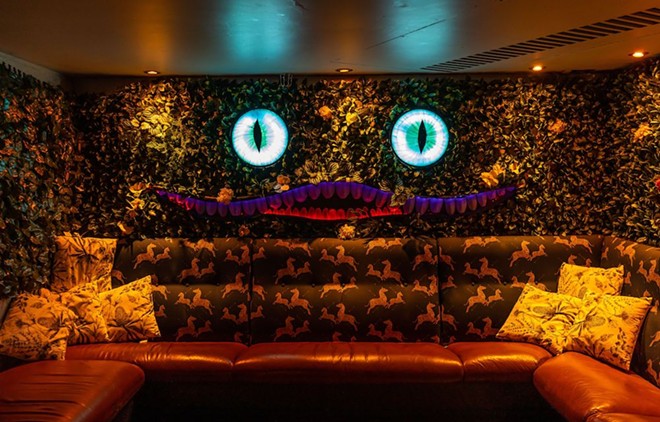 Another event pitched to us at the same time, an "Alice in Wonderland Cocktail Experience," was a more sophisticated ruse. This pitch used real photographs of an Alice-themed concept bar and even a walk-through video of the decorations — a nice touch for an event with yet another bogus-looking Zip Tickets link. No real names or contacts, and no location.

Last winter, the Courtesy bar downtown brought back their kitschy Christmas pop-up called "Miracle on Orange," and you knew exactly who was hosting it, and even where they got the decorations. Redlight Redlight also lets you know exactly who and where their annual Christmas-market event takes place. Eola General wants you to know when they're hosting an Orlando Meats vegan pop-up. And when the "world’s largest Christmas light maze" was coming to St. Pete last November, we knew exactly where it would be and who was organizing it.

Other media have started to pick up on these phony events, like the Columbus Underground in February, when they also tried contacting the mysterious event promoters behind the Pac-Man one. A few of the events they examined were accepting ticket purchases.

These fake promotions indicate that con artists are assuming people who want to attend events right now are pretty gullible. I reached back out to the senders with requests for comment and more information. I also advised them to look into a mirror and examine their own lives. Are they satisfied trying to convince people that fake events are coming their town? Do they gain satisfaction through offering joy, only to ghost on entire cities?

So far, none have responded.


This post has been updated with new information about the origins of the images used in the "floating cinema" email pitches.