As alligator mating season brings nests across Central Florida, Gatorland reminds you to watch your back 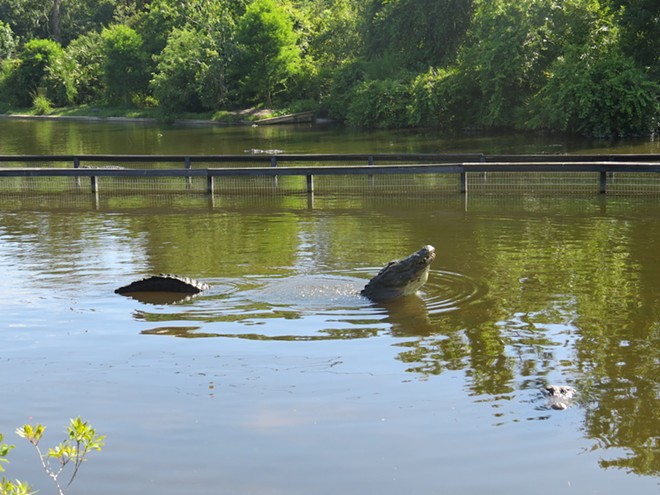 Although it is not recommended that you get up close and personal with alligators in the wild, Florida theme park Gatorland houses over 2,000 American alligators, which are native to Florida, where guests can do just that.

The theme park reopened its doors in mid May with new procedures to address COVID-19, but the real gator danger could be happening all around us. That's because females build nests and lay eggs in late June and July.

It’s likely more alligators will be seen in lakes, rivers and other habitats, and males will also be seen moving over land during this time of year, from one body of water to another.

May and June are the prime months for alligator mating season, with eggs hatching around mid-August and early September, said Gatorland's International Ambassador, Savannah Boan. She spoke with Orlando Weekly about alligator safety, and why it's especially important during and after mating season.

Boan says gators are more protective during this time of year.

First thing, do not feed an alligator. Larry, one of Gatorland's many gators, was relocated from the Villages in Sumter County after being caught by a trapper certified by the Florida Fish and Wildlife Conservation Commission. Gators caught by the FWC are often euthanized, but Gatorland, in order to bring Larry to the park, was able to pay Larry's trapper the same amount he would have gotten to kill the gator.

"Everybody was feeding him, even though they say they weren’t – because he knew his name and there’s only one way you can teach that," Boan said.

Paying the trappers to bring a gator to Gatorland instead of selling it for harvest is common for the Central Florida wildlife park, yet many trappers are too far away from Gatorland to drive, and there aren't many other places in the state that accept alligators. Gatorland is not legally allowed to go into the wild and trap gators and bring them into the park.

An alligator named Chester wound up eating a boxer and a German shepherd because people were feeding him. tweet this

One way Gatorland makes money is from their Gatorland YouTube channel. Gatorland vlogs air Monday through Saturday at 3 p.m., and the money accrued goes towards financing educational trips for staff as well as other financial needs to help rescue gators. Gatorland also hosts a 10 a.m. daily educational show, "School of Croc," on Facebook Live about alligators.

Florida is broken down by the FWC into numerous gator trapper districts – each area has a designated trapper and each is divided by the number of lakes and water depth of each lake. Trappers respond to emergencies like alligators found in pools or under a car. The trapper has a set amount of time to drive to the location and get the gator.

"Once an alligator is not afraid of people anymore and starts going towards people instead of away from people, that also classifies them to trap the alligator and to remove the alligator," says Donny Aldarelli, a reptile manager at Gatorland in Orlando.

The FWC reports that in the last 10 years there have only been seven unprovoked alligator bites in Florida as of 2019, of the estimated 1.3 million alligators living among Florida’s abundant bodies of water.

"People just don’t understand that once you feed them in the wild you are putting kids at risk and people’s pets at risk," says Aldarelli. Another alligator, Chester, wound up eating a boxer and a German shepherd because people were feeding him, Aldarelli said.

Alligators, who live an average of 50 years in the wild compared to 60 to 90 years in captivity, typically eat small deer, fish, turtles and crustaceans and are active from dusk till dawn. Gators are shy loners that love having a small space to protect. Gatorland offers the gators lots of natural habitat and food.

Male alligators can mate with multiple females, who lay eggs inside a soft dirt mound to protect them from raccoons and other species. Although not all raccoons can be kept out, the 110-acre theme park offers the gators a safe place to lay their eggs. Many of the gators in the park today were hatched on premises.

With safety as a priority, the wildlife theme park now requires guests to wear masks. Hand sanitizing stations and washbasins have been placed throughout the park in areas that are considered high-touch, such as show areas.

Shows are being capped at 25 percent capacity and are being repeated multiple times throughout the day to reduce large crowds. Guests are required to wash hands before and after touching the alligators, and high-contact surfaces are disinfected multiple times a day.

The train ride within Gatorland, which is usually operated by one person, is now under the supervision of three employees to ensure that every inch of the ride is cleaned before and after the ride.

Although guests must now adhere to social distancing, the rule with alligators has always been six feet distance, so Gatorland was well-prepared pre-pandemic, Boan jokes. 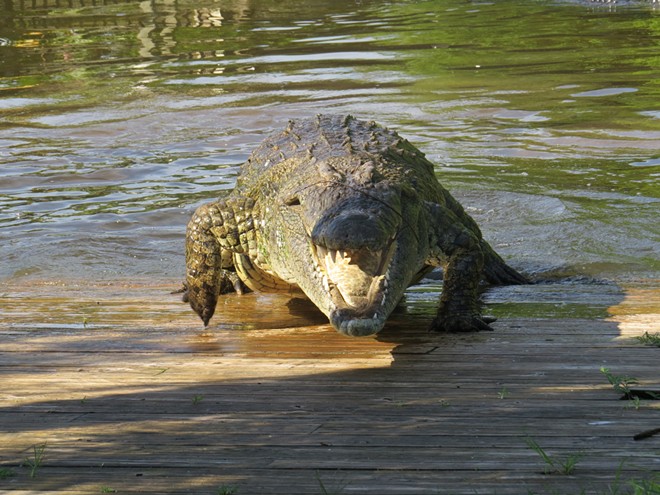 As part of the Orange County mandate to wear facial coverings, guests and employees must wear masks at all times including when handling the alligators, although "I don’t think the alligators can recognize me with my mask on," Boan says.