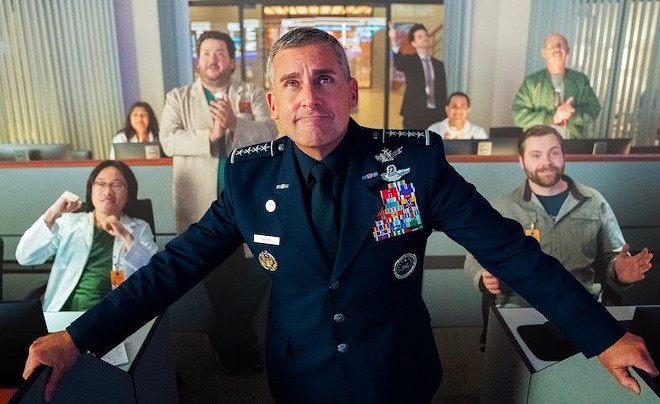 A television-obsessed president has found himself outmaneuvered by the very object of his obsession. (And his undoing is not even a cable or network channel, but streaming!)

The Hollywood Reporter writes that President Trump's new sixth branch of the military devoted to space warfare, Space Force, may have lost trademarks for its very name to a new Netflix show devoted to satirizing said Space Force, called (of course) Space Force.

Space Force, a new creation from the minds behind NBC's The Office and starring Steve Carell, premiered on May 29 and is getting a not-great critical reaction from outlets like the Verge ("astonishingly bad") and CNN ("never achieves liftoff"), but one thing they did indisputably right was due diligence on trademark claims, securing "Space Force" trademark rights around the world as far back as January of 2019.

And since the United States Patent and Trademark Office generally recognizes the "first to use" principle, the U.S. Space Force may already be racking up defeats.

Meanwhile, the Air Force only has one pending trademark claim to the name here in the United States.

Don't laugh too hard, though. Florida leaders going all the way up to Gov. DeSantis have been lobbying hard for the Space Force headquarters to be here in the Sunshine State. And Space Force participated in launches from nearby Cape Canaveral starting in January of this year, a collaborative effort with SpaceX.

So here in Florida, we're probably saddled with it, jokes and all.